As we near the end of 2022, here are some thoughts from members of the Frankfurt Kurnit advertising group about a few key advertising law issues to keep an eye on in the coming year.

Artificial intelligence -- Greg Boyd says, "AI art is the next generation of Photoshop. We should not allow a fear of new tools or potential liability to prevent us from using the magic wand. Indemnities and warranties are still being sorted out, but the key ingredient is a commonsense review of the inputs and materials produced. That is the secret ingredient to the safe use of this emerging technology."

Copyright -- Brian Murphy says, "I anxiously (and with some trepidation) await the Supreme Court’s decision in Andy Warhol Foundation for the Visual Arts vs. Goldsmith (see this post and this one), which will require SCOTUS to decide whether pop artist Andy Warhol’s unauthorized use of Lynn Goldsmith’s photos to create an iconic series of silkscreen portraits of pop legend Prince, some of which were licensed to Vanity Fair to illustrate articles, constitutes copyright infringement or qualifies as a transformative fair use. Will the Court agree with the Second Circuit that Warhol’s use was infringing or will it side with the district court and find Warhol’s use of the photos to be fair? And, in the process, with the Court leave in place, tweak or rewrite the rules for determining the types of uses that qualify as 'transformative?'."

Dark patterns -- Terri Seligman says, "We’ve heard a lot about 'dark patterns' in 2022 and I’m guessing we’re going to hear a lot more about them in 2023. What’s a 'dark pattern'? It’s a user interface that is designed to override a user’s own judgment and cognition: a technique used to manipulate users to do things they might not otherwise do. The FTC has already characterized a number of practices as dark patterns, including auto-renewing subscription programs that consumers unwittingly sign up for and that are difficult to cancel; surprise fees and costs and drip pricing; confusing and sneaky language and graphics in user flows that direct consumers to make unintended choices; design elements that obscure or subvert consumers' privacy choices; and more. The FTC has also reported that these dark patterns have an outsize impact on low income and other vulnerable communities. So, it seems very likely that the FTC’s interest in identifying and routing out marketers’ efforts to engage in these practices will continue, if not accelerate, in 2023. What’s the line between time-honored persuasive marketing techniques that encourage purchase and those that would be considered a dark pattern? Excessive calls to your customer service department to cancel or return purchases may give you a hint. Now’s a good time to practice #TransparencyByDesign."

Donation programs -- Kelly O'Donnell says, "Good news for marketers conducting cause marketing campaigns! California has delayed until 2024 the registration and other requirements it intends to impose on companies that fall under its definition of Charitable Fundraising Platform. As a reminder, if you offer round-up and/or donation at checkout programs online, conduct traditional commercial co-venturer campaigns with more than six charitable organizations in the calendar year and/or have established a donor-advised fund and promote the names of the charities you support through that fund, you are a Charitable Fundraising Platform in California as of January 1, 2023. However, the Attorney General is still in the process of promulgating regulations to fully implement the law, hence the delay. Note that other provisions of the law do go into effect on January 1, 2023, among them good standing requirements for charities; prohibition on misuse of charitable funds; and disclosure requirements."

Endorsements -- Jordyn Milewski says, "Earlier this year, the FTC issued proposed revisions to the FTC’s Guides Concerning the Use of Endorsements and Testimonials in Advertising. The public comment period on those revisions ended in September, which means that in the coming months we’ll hear more from the FTC about next steps.  At this point, we’re faced with a lot of questions: Will the FTC adopt the proposed changes as-is? Will the Commission make further changes to address concerns raised by the public comments? Will the Commission hold off on updating the guides for a while and instead address the changes via the FTC’s rulemaking procedures? One way or another, we can expect to hear a lot from the FTC on endorsement-related issues in the coming year.  Regardless of the path that the FTC chooses to take, the current draft of the Endorsement Guides provides a good roadmap for how advertisers should consider thinking about their endorsements as we head into the new year. For more information on the substance of those revisions, check out our five-part blog post series on the changes: Part I (Purpose and Definitions) here, Part II (General Considerations) here, Part III (Consumer Endorsements) here, Part IV (Experts, Organizations, and Kids) here; and Part 5 (Disclosure of Material Connections) here."

Environmental marketing -- Jeff Greenbaum says, "The FTC just launched its review of the Green Guides in December, so we're quite a ways off from getting updated guidance from the Commission about environmental marketing.  It's been more than a decade since the FTC looked at these issues, so if you've got research or opinions to share with the FTC about environmental marketing claims, now is the time to do that.  And, if you're making green claims right now, it's a good idea to take a look at the questions that the FTC is asking in its Request for Public Comment, since it gives you some good clues about the types of issues -- such as carbon offset claims, compostable claims, degradability claims, recyclable and recycled content claims, and sustainability claims -- that the FTC may be focused on in the coming months.  And just because a long review process is underway, don't think this means that the FTC is going to hold off on green-related enforcement (just check out, for example, the FTC's multi-million dollar settlement with two retailers in August related to their marketing of products made from bamboo)."

Health claims -- Kate Patton says, "Especially as we continue to battle the 'tripledemic' of 2022, advertisers should heed the FTC’s warning that they will 'pay a price for making false and unsubstantiated claims, especially around people’s health.' To that end, the FTC just released its Health Products Compliance Guidance, which provides 'guidance from FTC staff on how to ensure that claims about the benefits and safety of health-related products are truthful, not misleading, and supported by science.' While this new document is intended to update and replace the FTC’s guidance on dietary supplements issued in 1998, it goes far beyond that scope, applying to all health claims, whether for a supplement, drug, food, health app, or other health-related product. It also reiterates the more stringent 'competent and reliable scientific evidence' standard we have seen articulated in recent FTC enforcement actions. As a result, this new Guidance is a must-read for those making advertising claims about the benefits or safety of health-related products."

Ingredient claims -- Ariel Radow says, "In 2022, like in recent years, we’ve seen an uptick in litigation in the food/beverage and consumer product space involving ingredient representations that consumers claim are misleading. Class actions have been brought over claims like 'honey lemon zest' cold medicine, judges have ruled on 'all natural' snack bars and 'veggie' meatless products, and companies have settled disputes over the beef content in hamburgers, among others. We have no doubt that other claims like these will continue to arise in different categories, so it is important that marketers be mindful of what claims they might be conveying about a product’s content and make an effort to understand what their consumers, acting reasonably in the circumstances, might derive from not only the information on a product’s label, but the context in which the statements are made."

Privacy -- Daniel Goldberg says, "2023 is the year of comprehensive state privacy laws. California, Virginia, Colorado, Connecticut, and Utah all have privacy laws that take effect in 2023. Businesses will need to update their privacy policies, review their contracts, and implement measures to address these laws."

Social media -- Hannah Taylor says, "2023 promises to be a year of change for the social media industry, with the Supreme Court reviewing the scope of platforms’ immunity under Section 230 of the Communications Decency Act, potentially reviewing laws passed in Texas and Florida restricting social media platforms’ ability to moderate content, and with users leaving traditional platforms for alternatives like Lens, Minds and Mastodon. It will be important to watch how changes in the law and the tech impact how brands interact with consumers and how we all think about risk in this space."

Sports marketing -- Chris Chase says, "The implosion of cryptocurrency exchange FTX and its subsequent bankruptcy filing has great implications on the world of sports and celebrity marketing. For example, several class action lawsuits have been filed against athletes and celebrities for their role in promoting FTX (as well as other crypto and NFT brands), arguing that such promotion was an unfair and deceptive practice under federal and state law – placing a spotlight on endorser liability. To avoid potential claims, athlete and celebrity endorsers should ensure that proper substantiation exists for any advertising claims that the endorser makes on behalf of a brand and that the endorser has a good faith belief in such advertising claims. While an indemnity from the advertiser for claims about its product is generally standard and protects an endorser from liability to some extent, it may not be worth much when the brand has little ability to back it up – so the athlete or celebrity endorser would be wise to consider the actual evidence for the advertising claims before agreeing to endorse the product or service.  Regarding sponsorships, the FTX situation is yet another cautionary tale for rightsholders (along the lines of SpongeTech from a decade ago…) – particularly when entering into agreements with entities in nascent industries. Seeking more payments up-front (and in dollars!), limiting the length of the contractual term, expanding the ability to terminate, and seeking regular audits or reviews of financial statements from sponsors (particularly ones that do not have publicly available financial statements) are all considerations rightsholders may want to take going forward. Now that FTX has filed for bankruptcy, rightsholders have to file motions to have the court reject the sponsorship agreement or otherwise lift the automatic stay so that the rightsholder can terminate the agreement – both procedural and substantive situations in which rightsholders do not want to be."

Thanks to all of you for reading our blog and we look forward to catching up with you in 2023.  We wish you a very happy and healthy new year. 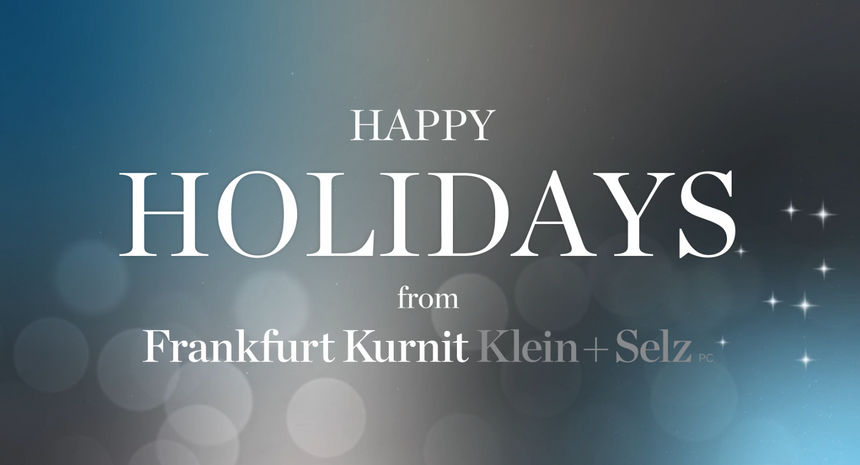