According to the Code of Responsible Practices of the Distilled Spirits Council of the United States, marketers of distilled spirits "should portray beverage alcohol products and drinkers in a responsible manner and reflect generally accepted contemporary standards of good taste."  So, does showing a celebrity drinking tequila, through a straw, directly from the bottle, comply with this standard?  That was the issue in a recent decision issued by the DISCUS Code Review Board.

Reality television show star Kendall Jenner is the founder of 818 Tequila.  She promoted the tequila on Instagram, through various posts, including in one post where she is shown drinking directly from the bottle through a straw, and in another post where she is shown holding a tray of tequila shots without a big crowd of people around her.

Another (unnamed) distilled spirits marketer challenged the posts, arguing that they violated the DISCUS guidelines by showing irresponsible drinking.  The challenger claimed that the photo of Ms. Jenner drinking directly from the bottle had the effect of "glamourizing the overconsumption of alcohol."  In addition, the challenger claimed that a photo of Ms. Jenner holding a tray of shots, without a lot of other people in the photo (who would, presumably, be drinking the shots) also "promotes and idealizes a lifestyle of overconsumption."  The challenged explained, "these portrayals of 818 Tequila flout standards of responsible drinking or good taste, in contravention of the DISCUS Code."

818 Tequila denied the charges.  The company argued that showing Ms. Jenner drinking directly from the bottle "does not demonstrate excessive consumption."  Saying that the "single still image is inconclusive," the company pointed to the fact that the photo does not actually show consumption of the alcohol (through, for example, video or before and after photos).  Regarding the photo of Ms. Jenner holding a tray of shots, 818 Tequila argued that, "the complaining industry member ignores the perspective of the camera angle, designed to emphasize the glasses, and misinterpreted the presence of the tray, without a reasonable basis, to believe that very few people were consuming many drinks, despite the fact that the balance of the photos in the series depict an event that is clearly larger in scale, with many more attendees."

The Code Review Board held, however, that the photo of Ms. Jenner holding a tray of shots didn't violate its standards.  The Board wrote, "these images did not display or promote irresponsible consumption but depicted a host distributing drinks to multiple guests at a party in a reasonable manner." 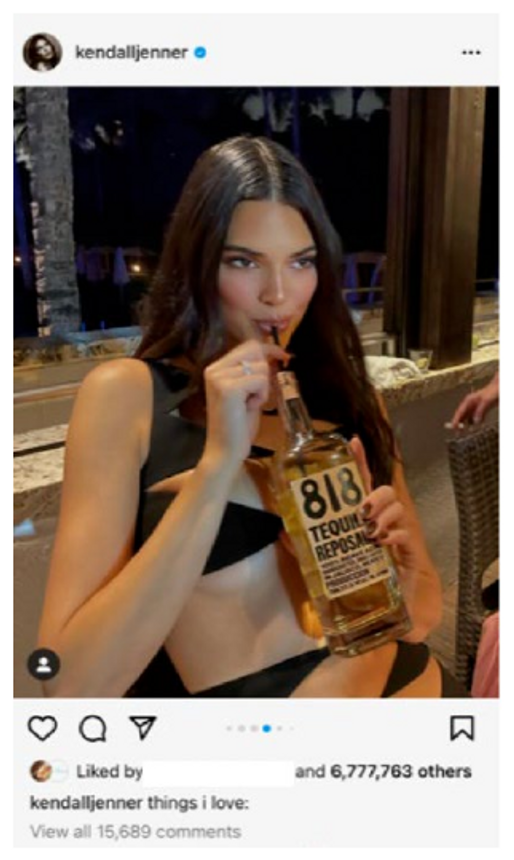