This post – about alcohol advertising, commercial speech and the First Amendment – is dedicated to the ascetics among us who are coming up on the end of Dry January.

Earlier this month, In Missouri Broadcasters Association v. Schmitt, the Eighth Circuit ruled that a Missouri statute that prohibits certain alcohol advertising practices violated the First Amendment. This decision creates a conflict between the Eighth and the Ninth Circuits, a conflict that could prove irresistible to those members of the Supreme Court who are interested in revisiting the scope of protection afforded to commercial speech under the First Amendment.

Missouri, like most other states, regulates the sale and distribution of alcohol through a three-tiered system. The tiers consist of:  (1) producers (distilleries, breweries and wineries), (2) distributors and wholesalers, and (3) retailers (restaurants, bars and liquor stores). Subject to certain exceptions, Missouri law requires that players in each tier, essentially, stay in their lane. As the court describes it:  “producers are prohibited from distributing and retailing, distributors are prohibited from producing and retailing, and retailers are prohibited from producing and distributing.” These laws – often called “tied house” laws – are aimed at forbidding vertical integration in the alcohol industry. A “tied house” is a retailer that is “controlled” (or “tied to”) a producer or distributor, typically through agreements pursuant to which the retailer is required to purchase at least some product from the applicable producer or distributer. As explained by the court:

Pre-Prohibition, alcohol was distributed through a tied-house system in various states. Under a tied-house system, an alcohol producer would set up saloonkeepers and provide them with premises and equipment. In exchange, the saloonkeepers agreed to sell only that producer’s products and to meet set sales requirements. Saloonkeepers often encouraged irresponsible drinking to meet those requirements. After the Twenty-first Amendment was enacted, many states adopted the three-tiered distribution model in part to preclude this system.

The plaintiffs – a winery, a bar, a radio station, and a broadcast industry trade group (the “Challengers”) – alleged that the following statute, as applied to them, and regulations, on their face, violated their right to freedom of expression under First Amendment:

After concluding that the Statute and regulations implicate the First Amendment because they restrict speech based on content and speaker identity, the court applied the familiar four-prong approach – often referred to as “intermediate scrutiny” – from Central Hudson Gas & Elec. Corp. v. Pub. Serv. Comm’n of N.Y. to evaluate whether they unconstitutionally burdened the Challengers’ commercial speech. Those prongs are:

With respect to the Statute, the first prong was not in dispute. The court sidestepped the question of whether, under the second prong, the state’s proffered interest – i.e., “preventing producers and distributors from unduly influencing retailers” – was substantial because it found that, even if it were, the state had failed to satisfy the third and fourth prongs. For the third prong, the court found Missouri’s vague appeal to “history” (that tied house laws have been around for nearly a century) and “consensus” (that the majority of states and the federal government have enacted tied house laws) insufficient to demonstrate that the Statute alleviates the harm of undue influence within Missouri. In the court’s words, “the fact that other states and the federal government have tied-house laws does not make Missouri’s version constitutional.” In addition, the court found that the many exceptions to the statute – e.g., that producers can support a retailer by providing on-premise advertising collateral but not billboards or print advertising – rendered “the Statute as applied ineffective in preventing undue influence “in a direct and material way.” Finally, the court held that the state failed to demonstrate that the Statute was not more extensive than necessary to further the interest of preventing undue influence. Specifically, the court noted that there were several alternatives that could advance the state’s interest without implicating the Challengers’ free speech rights, including policing rather than banning inter-tier advertising arrangements.

With respect to the Discount Regulation and Below Cost Regulations, the state argued that it had a substantial interest in reducing overconsumption and underage drinking (the second prong, which was not in dispute), and that the regulations advance those interests because they are aimed squarely at advertising promotions (alcohol sold below cost or at discount) that are more likely to cause overconsumption and underage drinking. Once again, the court sided with the Challengers, finding that the state had failed to offer any evidence that restricting advertising for these types of promotions actually furthers the state’s goals (third prong). The court noted that the state hadn’t proffered data that showed that overconsumption or underage drinking decreased after the Regulations were adopted in Missouri or that it is less prevalent in Missouri as compared to states without similar restrictions. The court also found that the state failed to demonstrate that the Regulations were not more extensive than necessary to further its interests (fourth prong). Once again, the court was persuaded that other options – e.g., an alcohol tax, educational programs, banning sales of discounted or below-cost alcohol, or enforcing penalties –  were available that wouldn’t burden commercial speech.

It is interesting that the Eighth Circuit did not cite Retail Digital Network, LLC v. Prieto, a Ninth Circuit decision from 2017 that involved a challenge to the constitutionality of California’s tied house laws and reached the opposite result. In that case, the plaintiff ran a business that provided liquor stores with digital screens on which a continuous loop of commercials played for the captive audience of shoppers. Various alcohol producers had refused to advertise on the plaintiff's in-store network, fearing that doing so would violate Section 25503(f)–(h) of the California Business and Professional Code, which prohibits alcohol manufacturers and wholesalers from providing anything of value to retailers in exchange for advertising their alcohol products. The plaintiff sued, seeking a declaration that the law constituted an unconstitutional restriction on commercial speech.

In an en banc decision, the Ninth Circuit sided with the state, holding that the laws were constitutional. Applying Central Hudson, the court found that the statute “directly and materially advances the State’s interest in maintaining a triple-tiered distribution scheme” (third prong) and that it was “sufficiently tailored to advance that interest” (fourth prong). (The first two prongs were not disputed.) With respect to the fourth prong, the court agreed with the state that the statutory restrictions were necessary to prevent producers and distributors from exerting “undetectable influence over retailers.” Indeed, the court believed that without the law, “retailers and wholesalers could side-step the triple-tiered distribution scheme by concealing illicit payments under the guise of ‘advertising’ payments.” (By contrast, the Eighth Circuit was far more willing to second guess the legislative choices and propose alternatives that it believed were less burdensome to free speech.) The Ninth Circuit also found that the various exceptions to the law (for example, exceptions applicable to stadiums, arenas, zoos, and aquariums) did not undermine its purpose; in the court’s view, because those exceptions applied only to a small subset of retailers, they could not have a material effect on the overall scheme. (The Eight Circuit, of course, viewed the Missouri’s exceptions very differently.)

Will the Supreme Court step in to resolve this conflict? I sure hope they will, not only to address the specific question of the enforceability of tied house advertising restrictions, but also to address confusion about the proper standard for evaluating the constitutionality of restrictions on commercial speech. In the forty years since Central Hudson was decided, subsequent Supreme Court decisions have raised questions about whether the Court's “intermediate scrutiny” approach remains good law. In particular, many lower courts and commentators have debated whether the  Court’s 2011 opinion in Sorrell v. IMS Health, Inc. (which involved a challenge to a statute restricting the sale, disclosure, and use of pharmacy records for marketing purposes) modified Central Hudson to require a more “heightened judicial scrutiny,” rather than traditional intermediate scrutiny when evaluating restrictions on truthful, non-misleading advertising for legal products. The Ninth Circuit’s majority decision explores this issue at some length and concludes that the Supreme Court did not intend to change Central Hudson; a dissenting judge, however, disagreed.

In the meanwhile, until such time, if ever, that the Supreme Court takes up the issue, we will have to live with a circuit split between Show Me State and the Golden State. 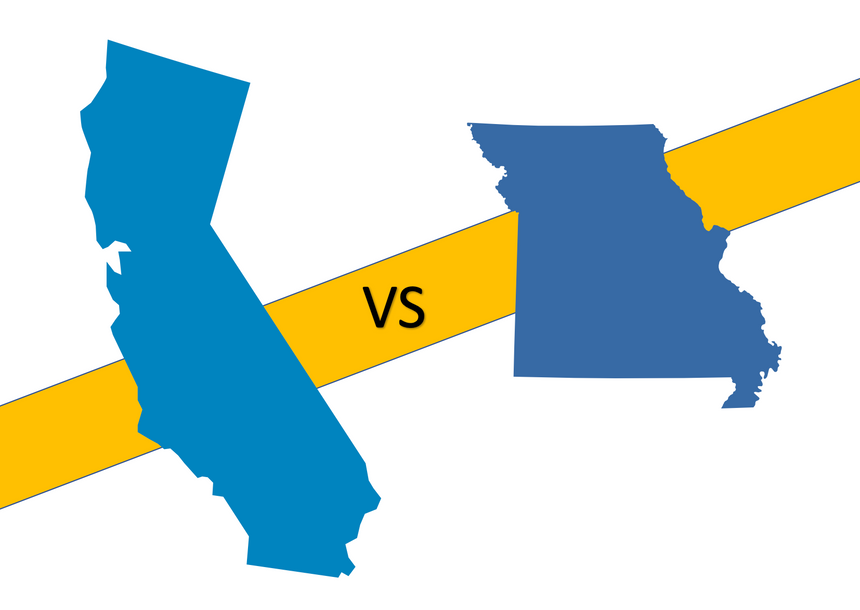