As we previously reported, CNN recently rejected a commercial for President Donald Trump's presidential campaign on the grounds that the claims in the commercial about Joe Biden were "demonstrably false."  Now, Facebook has come under fire for agreeing to run the same commercial.

Although the Biden campaign complained to Facebook about the fact that it was airing the spot, Facebook decided to allow it to run.  In a letter to the Biden campaign, a Facebook representative said, "Our approach is grounded in Facebook's fundamental belief in free expression, respect for the democratic process, and the belief that, in mature democracies with a free press, political speech is already arguably the most scrutinized speech there is."  Facebook said that while it will allow false claims by politicians, it won't allow politicians to include in advertising a "viral hoax," such as a link to an article or a video that has previously been debunked.  Facebook also pointed to the fact that, although a politician's advertising claims are not subject to Facebook's fact-checking requirements, its other advertising policies do apply.

Now, in response to Facebook's hands-off policy, Senator Elizabeth Warren has weighed in, saying, "Facebook holds incredible power to affect elections and our national debate.  They've decided to let political figures lie to you -- even about Facebook itself -- while their executives and their investors get even richer off the ads containing these lies."  To make her point, Senator Warren "intentionally made a Facebook ad with false claims," which she said was quickly approved by, and is now running on, Facebook.  The ad's headline reads, "Breaking news:  Mark Zuckerberg just endorsed Donald Trump" and shows a picture of the men shaking hands.  The ad goes on to explain that, even though the claim is not true, Facebook will run it anyway because "they're deliberately allowing a candidate to intentionally lie to the American people."

With television and social media platform advertising policies now the subject of national debate, there's going to be increased attention on the clearance decisions that they're making.  It's also likely that there will be increased pressure on other media outlets to stake out their positions on these issues.  It should also spark some interesting debate about the role that the media should play in reviewing and approving a politician's advertising claims. 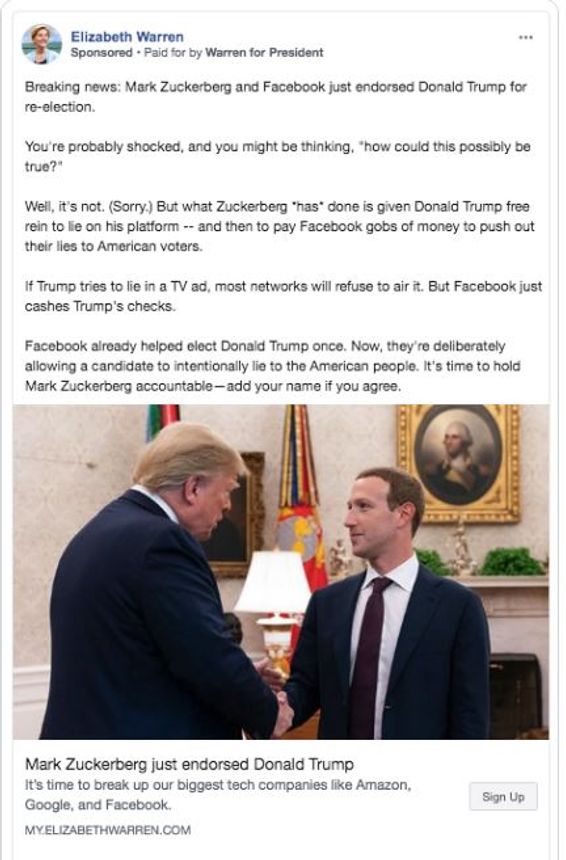