Not so long ago (last May), right here in our own galaxy, SAG-AFTRA focused its laser cannons directly at a squadron of six third party signatory companies that it considered to be a threat to the Galactic Empire.  Specifically, as I recounted in a previous blog post, the union revoked the signatory status of Checks in Motion, Inc., CMC/Forecast, Inc., CMS Productions, Talent Direct, Inc., Talent Solutions, and Waving Cat.  Now, after months of negotiations, the battle has ended, and the parties are poised to sign a treaty in the form of a unique (and truly extraordinary) Letter of Adherence ("LoA").  (It is reported that other third party signatories will have to sign the same LoA.)

Even a cursory review of the LoA leaves little doubt that, this time around, the Force was with the union.  Indeed, the union describes the settlement as a "significant victory" that imposes "rigorous new requirements" on the third party signatories that will help achieve "a core union mission:  properly protecting our members working under the Commercials Contracts."  (The operative provisions of the LoA go into effect on January 1, 2020.)

In this post, I offer my initial thoughts on this important development.  The settlement can be summarized succinctly as embodying two "commandments" that will govern third party signatories going forward:  (1) Thou shalt be the bona fide employer of talent, and (2) Thou shalt not work for non-signatory agencies.  I’ll examine each "commandment" in turn.

Thou Shalt Be the Bona Fide Employer of Talent (Paragraph 1)

The union had alleged that third party signatories were not bona fide employers of talent:  in other words, they were employers on paper only, and the non-signatory brands and agencies were, in reality, acting as the talent’s employers.  According to the union, this arrangement presented various ills – worse, perhaps, than being encased in carbonite or strangled by a dianoga in a trash compactor – because it meant that union had a direct relationship only with a middleman (the third party signatory) and not with the "real" employer (the brand or agency that hired the third party signatory).  Here’s how the union frames the concern:

"The union must have direct relationships with employers so we can enforce the standards established in our contracts.  This includes: a safe work environment, timely and proper payment, health insurance and pension contributions, responsible use of performance, and protection against sexual harassment and workplace abuse."

The signatories disputed the union’s characterization and argued that, in fact, they were co-producers of the commercials. They also disputed that there was evidence that SAG-AFTRA compliance issues were more prevalent on productions in which third party signatories were involved.

The very first operative sentence of the LoA addresses the union’s concern head on:  "Company must be the employer of the performers."  But what does it mean to be "the employer of performers"?  This LoA specifies that in order to qualify as "the employer," the signatory must perform "at least" each of ten listed activities.  Moreover, these ten activities must be performed by an "actual W2 employee" of the signatory and are "non-delegable."  This means that signatory companies cannot engage freelancers (unless they hire them as W2 employees) to perform any of these activities, nor may they delegate these activities to the production company, the advertiser, the advertising agency (see Part 2 below), or anyone else that they may encounter in the canteen when looking for safe passage to Alderaan.

The ten required "employer" activities are:

Thou Shalt Not Work for Non-Signatory Agencies (Paragraph 2)

Paragraph 2 is where things get interesting.  In this section, third party signatories agree that they "will only serve as signatory for advertisers, and only when the advertiser has not engaged and will not engage an advertising agency to perform any of the employer functions set forth in Section 1 above in connection with the commercial for which the Company is being engaged."

Translation:  third party signatories can only work for advertisers (not ad agencies), and they must ensure that no agency performs any of the ten "employer" activities.  To make sure signatories live up to this commandment, the LoA requires the following:

As a result of these procedures, the union secures written commitments from three parties – the signatory, the advertiser and the agency (if there is one) – that no agency will perform any of the ten "employer" activities.   (This belt and suspenders approach makes you wonder if during negotiation the signatory companies ever said to the union "I find your lack of faith disturbing.") I suspect that the union demanded these strict procedures because it was concerned that a renegade advertising agency might, perhaps by employing a Jedi mind trick, attempt to get a third party signatory to "look the other way" and allow it to participate, on the sidelines, in a union production. ("This is not the non-signatory agency you are looking for.  You can go about your business.  Move along.")

The advertising agency that developed the creative concept for a commercial has a compelling argument that it is in the best position to make sure that its creative vision is realized in the final production.  The LoA, however, will limit its ability to do this.  It is true that the LoA does not prohibit agencies from developing the creative, providing post-production services (such as editing), or providing (at least within parameters) certain kinds of creative consultation services.  However, by curtailing the agency’s involvement in the selection of the production company, director, and cast, the LoA bars the creative agency from providing input on key creative decisions.

Finally, while the union clearly won this battle, did it win the war?  If winning the war means protecting union performers from the potential perils of having anyone other than a signatory act as the bona fide employer, then, yes, the union won.  But if winning the war means taking actions that will result in more union jobs in the long run, then patience you must have, my young padawan.  Nobody can predict whether the net effect of this settlement will be more or fewer union productions (and union jobs).  Will brands that previously hired non-signatory agencies to produce union spots shift their work to signatory agencies?  Or will they stick with their cherished non-signatory agencies, resulting in fewer union gigs?  Will non-signatory agencies find a way to stay in the mix to protect their creative and comply with the letter and the spirit of the LoA?  Will non-signatory agencies relent and become signatories?  It is too soon to tell, and certainly too soon to have a princess pin a medal on anyone. 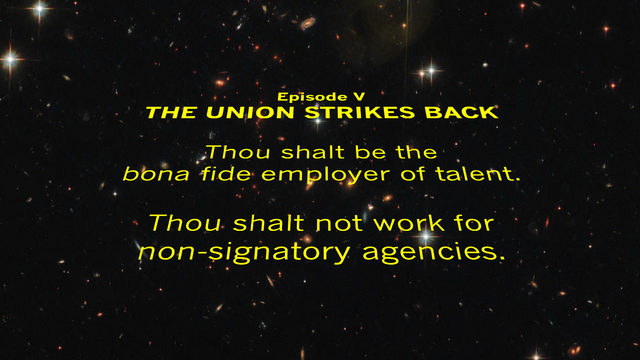 On the Barefoot Contessa, Peppermint Bark, and the Volitional Conduct Requirement for Copyright Infringement
Brian Murphy

Fair Use, "The Frankenstein," and the Mixed Up Files of Mrs. Basil E. Frankweiler
Brian Murphy
Recent posts from Advertising Law Updates