This is the first of a series of posts about the new provisions.  Today, I share my first impressions about the the most interesting (and exciting) part of the MOA:  the all-new Alternate Compensation Structure ("ACS").  To help unpack it, I've created some charts that provide a bird's eye view of some of the ACS's key provisions.  (These charts are a work-in-progress and will be updated from time to time.  Email me with any comments or suggestions.)

The Commercials Contract plays a hugely important role in the advertising ecosystem.  For more than half a century, the contract has grown by accretion, with each change to the media landscape resulting in a new layer of payment provisions and added complexity.  The "tells" are clearly visible to the discerning contract archeologist -  layers that reflect the "good ol' days" of live commercials (like this one for Jell-O starring Johnny Carson), the birth of cable, the internet, and "New Media," and so much more.  The ACS takes an entirely different approach to talent compensation, and it is a potential game changer.  The JPC and the union deserve credit for taking the leap.  There's a lot to like about the ACS - for producers and for performers.  #Respect.

As is often the case when something new is added to the Commercials Contract - and especially something novel - it is going to take time for the ACS’s contours to come into focus.  We may be tempted to shake it like a Polaroid picture, but, as everyone of a certain age knows, shaking a Polaroid doesn't make anything happen faster.  Patience is in order.  No doubt, questions will arise, and gaps will need to be filled in as producers apply the ACS in real world scenarios.

Quick reminder:  SAG-AFTRA's National Board unanimously approved the contract, and now union members get to vote on ratification (with a deadline set for approximately May 8th).  The union expects its membership to approve the contract.

Overview of the Alternate Compensation Structure

Compared to the compensation model in the main contract, the ACS provides a streamlined and simplified way to pay talent in commercials.  The ACS provides producers with three different "bundles" to choose from, each covering different usage rights and priced accordingly based on the scope of the included rights.

The Full Bundle.  As the name suggests, this is the broadest package, covering 10 Class A uses and unlimited use of the commercial in all other media, within a single one-year maximum period of use ("MPU").  Producers choosing this model pay a fixed fee of $20,000 for each on-camera principal performer ("OCP") and $15,000 for each off-camera principal performer.  Class A uses after the first 10 cost $100 each for OCPs.  Unlike in the main agreement, the rates for Class A uses do not decline with more uses, do not vary based on the length of the commercial, and are not discounted for guaranteed airings.  This bundle is akin to an "all you can eat" buffet, subject to a surcharge for caviar and lobster (i.e., Class A uses after the first 10).

"Digital Upfront" Bundle.  This bundle covers use across all digital media (internet, new media and over-the-top platforms ("OTT"), such as Hulu) for a one-year MPU for $3,825 per OCP ($2868 per off-camera performer).  This bundle is priced competitively compared to the amount a Producer would pay under the main contract to produce and use a spot on both the Internet and New Media for 1 year.  It is a no-brainer to predict that this bundle will become an attractive choice for "made for" digital spots.

"A la Carte" Bundle.  Under this bundle, producers pay an upfront guaranteed fee of $8,000 per OCP ($6,000 per off-camera performer) and then credit, against that guaranteed payment, specific "a la carte" usage fees, each of which covers a 13-week cycle of use in particular media.  Similar to a celebrity over-scale deal, if the cumulative usage fees exceed the guaranteed payment, then the overage is paid to the performer.  As is true in many things in life, you may save money in the long run if you "buy in bulk" and choose the "Full Bundle" up front rather than go with the pay-as-you-go A La Carte bundle.  To pick an extreme case (which is admittedly an unlikely one), a producer that elects to use the A La Carte bundle, but then ends up using the spot in the same media covered by the Full Bundle for a full year, would end up paying $39,900 per OCP.  That is nearly twice as much as the cost would have been under the Full Bundle.

This chart summarizes the key details for each bundle: 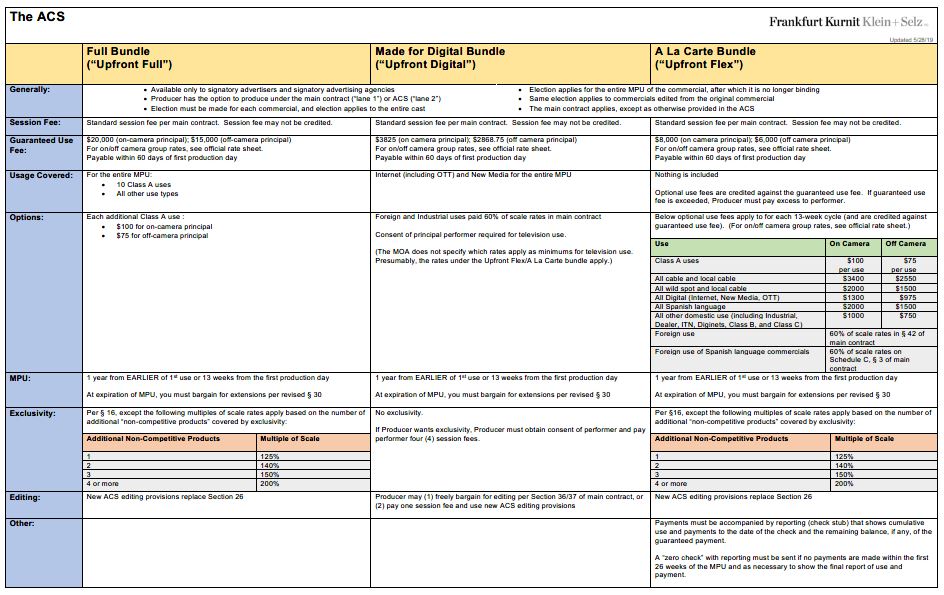 With the introduction of the ACS, a signatory agency or advertiser has five different options when producing spots made for digital use, as shown in this chart: 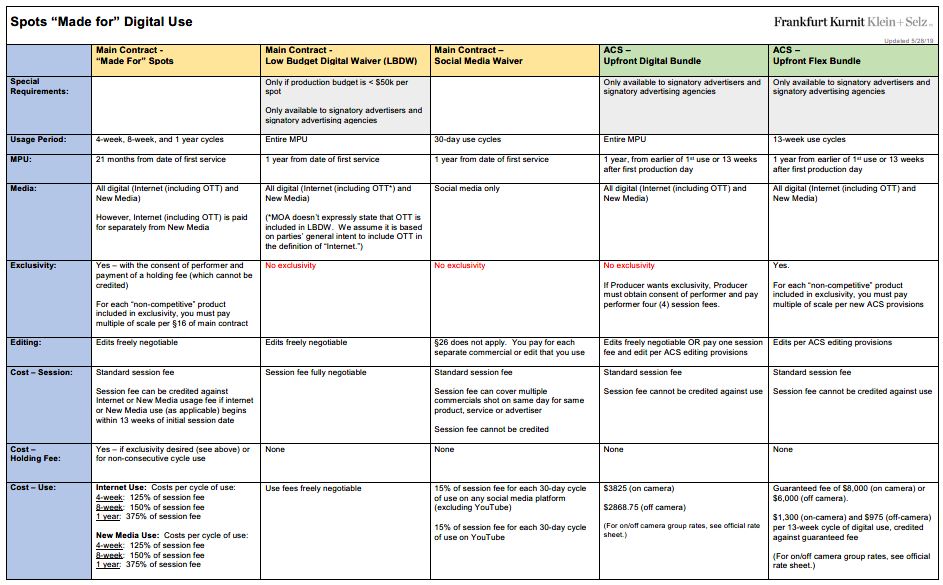 At the outset, it is important to note that three of the five options are available only to signatory brands and advertising agencies - and not to non-signatories that rely on third party signatory companies to produce union spots.  This is part of the efforts by the JPC and union to "level the playing field" (a topic I plan to cover in a future post).

Producers will, of course, need to plan ahead to determine which option best meets their needs for each production.  A few thoughts:

Exclusivity:  If exclusivity is a "must have" for a client, then the Low Budget Digital Waiver and Social Media Waiver are off the table.

Longer-Term Use:  A brand that absolutely, positively, needs to use the spot for more than one year (and that doesn't want to risk the possibility that performers will not renew after the one-year MPU expires) should consider producing under the main contract (lane 1), which will allow the brand to enjoy the longer 21-month MPU (albeit it in exchange for the higher rates under the main contract).

Social Content with a Short Shelf Life:  For the advertiser producing social media content with a short shelf-life, the Social Media Waiver is a much more attractive option than before, now that it has been expanded to cover YouTube.  (This is a very welcome change!)

Low Budget Content:  The Low Budget Waiver remains available for brands that are producing low budget content that qualifies for the waiver.  Under this option, the brand can freely bargain with performers for both session and use fees, and the usage covers all digital media.

The ACS Digital Bundle:  When the production budget is too high to qualify for the Low Budget Digital Waiver, the ACS's Digital Bundle provides a really attractive option, both because it is priced fairly (and competitively) and because it covers use across all digital media for one year.  Indeed, I wouldn't be surprised if, at least in certain cases, producers choose to produce under the Digital Bundle even if they might otherwise qualify for the Low Budget Digital Waiver - out of a desire to dispense with direct bargaining with performers and their agents.

Under the ACS, there are three categories of edits that do not result in the creation of a new commercial for talent payment purposes:  Permitted Edits, Paid Edits and Addressable Edit.  Anything that doesn't fall in these categories constitutes an Unpermitted Edit which is tracked and paid for as a separate commercial.

Here are the details: 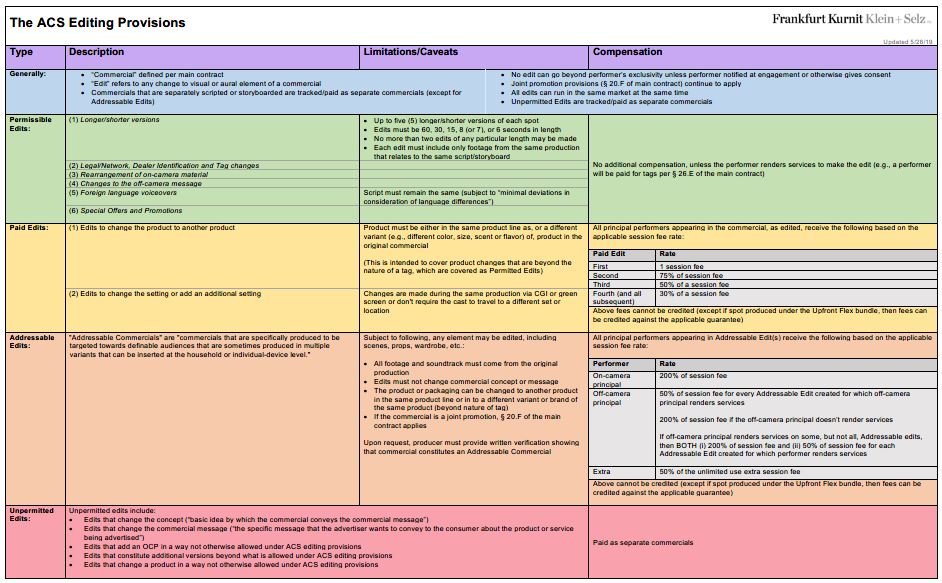 The ACS provide several examples aimed at providing guidance as to the types of changes that will result in an edit falling in the Unpermitted Edits category.  Two observations here:

First, if you change the commercial message, the edit will constitute a new commercial.  “Commercial message” is defined as “the specific message that the advertiser wants to convey to the consumer about the product or service being advertised.”  In the example in the MOA that illustrates the point, the base commercial has a caveman buying insurance to promote that buying insurance is so simple that even a caveman can do it, and the edit shows the same caveman filling out an insurance claim to promote that, in modern times, even a caveman needs insurance.  This example is clear enough: the takeaway from the base spot and edit are different, which makes the edit a Nonpermitted Edit.  Of course, determining the commercial message of a spot sometimes can be tricky - especially when the spot conveys implied rather than (or in addition to) express claims.  In more complicated situations, application of this "rule" may prove to be trickier.

Second, if you change the concept of the commercial, the edit will be a Nonpermitted Edit.  “Concept” is defined as “the basic idea by which the commercial conveys the commercial message.”  The MOA provides an example that suggests that the “concept” of a commercial should be defined narrowly.  Here's the example in full:

Of course, at an abstract level, every commercial has the same "concept":  please buy our amazing product.  (This is advertising's analog to the Hero's Journey, the kernel of every story ever told.)  Clearly, conceptual similarity at that high level can't be determinative.  However, in this example, an argument could be made that (i) the concept of the spot and the edit are the same - i.e., that buying insurance is easy, (ii) the edit is merely a different execution of that same concept, and (iii) this type of edit is the kind of executional variation that Addressable Edits are intended cover (to allow customization by brands to reach specific target audiences).  Indeed, this example, at least arguably and to some degree, is in tension with the other examples that are included in the MOA to illustrate what constitutes proper Addressable Edits.

This reminds me (a little) of the challenge, in copyright law, of distinguishing between unprotectable ideas and protectable expression.  In that context, Judge Hand famously wrote in Nichols v. Universal Pictures Co.:

Upon any work ..., a great number of patterns of increasing generality will fit equally well, as more and more of the incident is left out. The last may perhaps be no more than the most general statement of what the work is about, and at times might consist of only its title; but there is a point in this series of abstractions where they are no longer protected, since otherwise the [author] could prevent the use of his "ideas," to which, apart from their expression, his property is never extended.

When applying the ACS editing rules, we sometimes will be tasked with a similar exercise:  identifying, from within a "series of abstractions," the concept of the original spot that will define the scope of the editing rights.

I would love to hear what others think about the new ACS specifically and the 2019 Commercials Contract generally.   Email me, call me, text me, post a comment on LinkedIn ...

And ... look for future posts about the 2019 SAG-AFTRA Commercials Contract ... published soon! 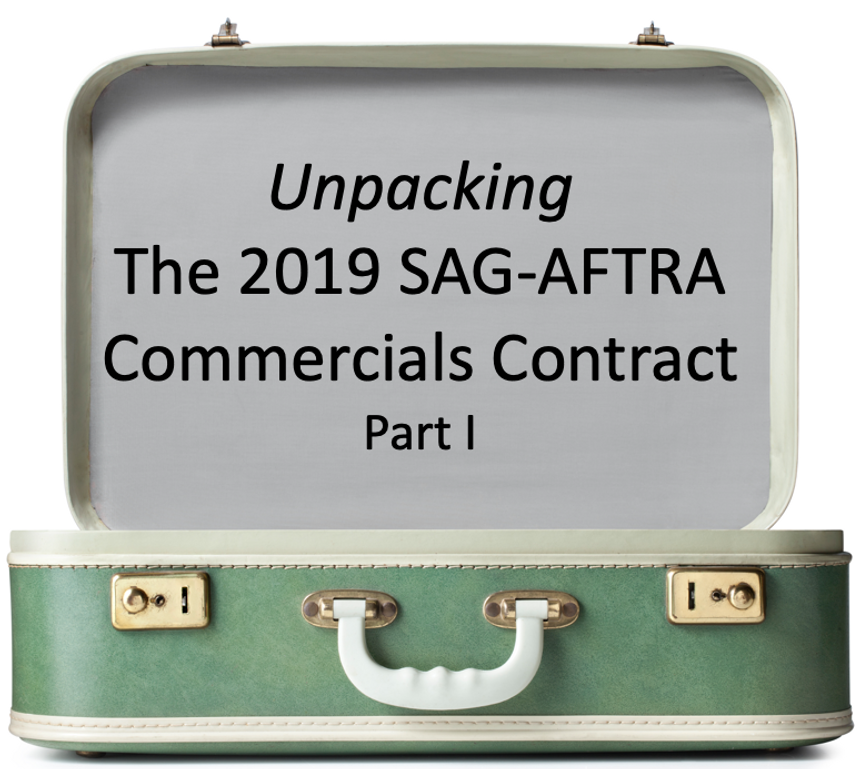