The consumer sued for false advertising and other claims under New York law.  In determining whether advertising is misleading, courts must determine whether the advertising is "likely to mislead a reasonable consumer acting reasonably in the circumstances."  It's not enough that a few consumers might conceivably be misled.  Rather, in order to state a claim, the plaintiff must plausibly allege that "a significant portion of the general consuming public or of targeted consumers, acting reasonably in the circumstances, could be misled."

In order to measure the carbon footprint of its products, which it then promotes in its advertising, Allbirds uses a life cycle assessment tool.  Conducting a proper life cycle analysis is no simple task, and it invariably leads to judgments being made about what to include. The plaintiff argued that the methodology that Allbirds was using was insufficient, because it didn't fully take into account all of the potential environmental impact associated with wool production.

The court really wasn't interested in the plaintiff's opinions about the life cycle assessment tool that Allbirds had chosen to use or in trying to assess what the optimal method would be to conduct a life cycle analysis.  Rather, the court focused on whether Allbirds conducted the analysis that it said that it conducted.  The court wrote, "it is not plausible that a consumer would be misled into thinking that Defendant undertook its carbon-footprint calculation in any manner other than the one it describes in its literature, and Plaintiff has not suggested that Defendant does not do it in this manner."

While this is certainly not the last word on this issue, this decision is good news for marketers who are attempting to conduct life cycle analyses of their products in order promote the environmental benefits of their products.  This court, at least, didn't seem all that concerned about whether the analysis was conducted perfectly, but instead focused on whether the advertiser has been transparent about the analysis that it did conduct.

The plaintiff also alleged that Allbirds' claims about the way its sheep are treated were misleading as well.  As the court explained it, "Plaintiff takes issue with Defendant's marketing scheme that involves depictions of 'happy' sheep in 'pastoral settings,' alleging that they rest on 'empty welfare policies that do little to stop animal suffering.'"

The plaintiff pointed to advertisements for Allbirds which show the sheep in beautiful, pastoral settings, and which include statements such as, "What if every time you got a haircut they made shoes out of it?  That would be pretty cool."  and "Behind every shoe is a sheep.  And behind every sheep, is another sheep, probably."  Here, the court held that the plaintiff "fails to identify any misstatement in any advertisement that would deceive consumers."

The plaintiff also alleged Allbirds' marketing claim, "Our Sheep Live The Good Life," along with depictions of "happy" sheep in pastoral settings, is also misleading.  The court held that this is non-actionable puffery, however.  The court explained that the phrase is a "subjective, non-specific, unmeasurable, and vague statement" -- not one "that a reasonable consumer would regard as making a factual claim on which she could rely."

While "live the good life" was only puffery here, the result would likely have been very different if the statement were paired with specific company commitments to comply with certain animal welfare standards (and if the company hadn't been in compliance with those standards). 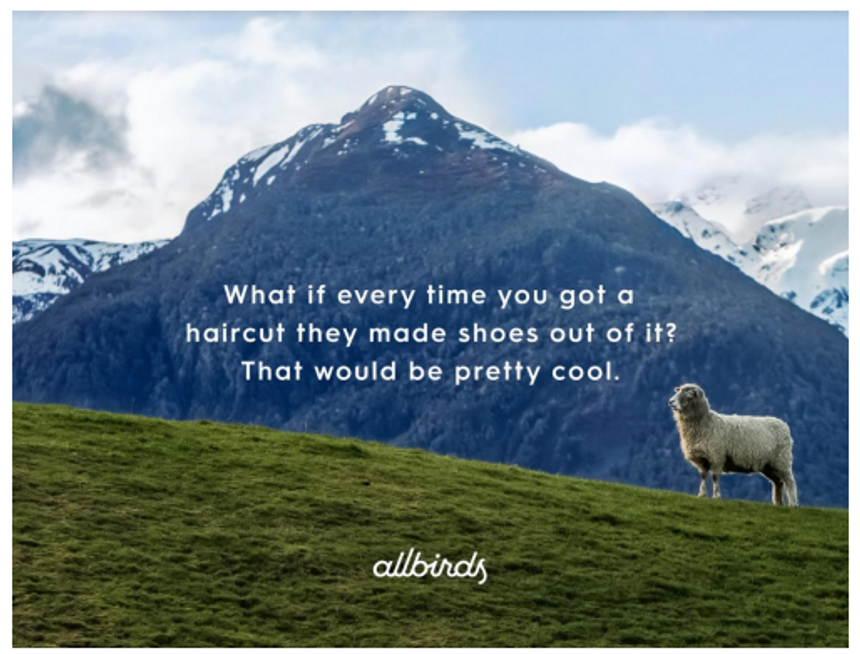