Saying that "harmful stereotypes in advertising must not be a forever problem," the National Advertising Division said that it was time to start a conversation about developing a mechanism to address representation in advertising.  Noting that other countries have had self-regulatory systems in place for years that have addressed these issues, the NAD asked, "is this type of advertising self-regulation even feasible in the United States?"

The NAD said that a necessary first step in increasing positive representation in advertising is raising awareness, and the next step after that is accountability.  The NAD wrote, "Advertising self-regulation is well-suited for this role and many self-regulatory organizations have already stepped up to the challenge."  (Last year, the International Council for Advertising Self-Regulation issued a report that said that, of the self-regulatory organizations that participated in its survey, all of them, except the United States, include the principle of non-discrimination.)

Noting that the NAD has historically evaluated advertising primarily for truth and accuracy, the NAD raised the possibility of opening the NAD process, or creating a separate process, to create accountability for harmful stereotypes.  The NAD wrote, "while government enforcement of such standards raises First Amendment concerns, our use of public decisions and press releases could initiate industry dialogue around issues of gender expression, race, religion, sexuality, and age."  The NAD added, "A small number of cases could have a very big impact on industry."

NAD's sister organization, the Children's Advertising Review Unit, already has standards in place to address stereotyping in advertising directed to children under the age of 12.  Last week, in a blog post, CARU encouraged advertisers to focus on diversity and inclusion in their advertising, raising the possibility that CARU plans to increase its enforcement efforts in this area.

This is not the first time that the NAD has raised the question of whether its standards should be changed to address harmful stereotypes in advertising.  At the NAD's annual conference last year, the NAD held a panel addressing these questions as well, "Diversity, Inclusion & the Elimination of Bias in Advertising Law."

It will be interesting to see how NAD, and its parent organization, BBB National Programs, decides to tackle these issues in the coming months.  We'll report back as we learn more. 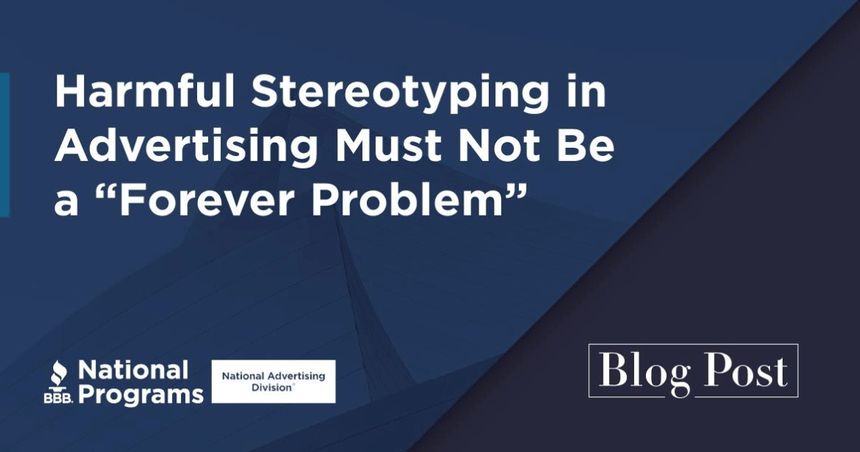