Regular readers of this blog know about my "Subway Series" (and my pandemic-inspired "Not On The Subway Series"), but newcomers may be wondering what the subway has to do with advertising law. Absolutely nothing! But I used to occasionally riff on ads I'd see on the subway during my commute to and from work. When I stopped commuting last March, I started writing occasional pieces about ads I'd see online or about advertising law issues I was just pondering (in addition to my regular posts about new cases and enforcement actions). This post is an example of a "just pondering" ad law issue and I hope it gets you thinking about this interesting issue too.

A few times a year I get a question from a client about pricing similar -- or even identical -- products differently. Sometimes the client wants to price two products differently even though the product formulations themselves are the same because the accompanying delivery technology differs. Or the two skus are meant for different use cases. Or they’re sold in different markets or under different brand names. Whatever the situation, the question always gets me thinking long and hard, especially if the two skus differ only in their packaging and price.

Interestingly, and with just a few notable exceptions, the courts are not all that receptive to plaintiffs' claims that pricing the same items differently is unfair or deceptive. Perhaps not surprisingly, courts are reluctant to second-guess merchants’ pricing practices in the absence of non-competitive activity or in the absence of false or deceptive claims about the prices (e.g., claiming that a price is a “sale” price even if no higher price had ever been charged, or claiming the price is lower than competitors’). As more than one court has noted, “price regulation is a quintessentially political question and thus nonjusticiable.” (See, e.g., Boris v. Wal-Mart Stores, Inc., 35 F. Supp. 3d 1163 (C.D. Calif. 2014), aff’d 649 Fed. Appx. 424 (9th Cir. 2019)). Caveat emptor, anyone?

However, there are at least a few cases where such a challenge has been successful, like this old Bausch & Lomb enforcement action where the AGs were concerned that the labeling on the differently-priced but identical contact lenses led consumers to mistakenly believe that there was something significantly different between them. Hence a careful analysis is needed when this situation presents itself.

Here are the different issues I like to consider:

None of these issues are dispositive but all could be relevant in considering what impressions are created for consumers not just from the different prices themselves but by the accompanying materials and claims. Pricing itself may be largely “nonjusticiable” but claims made in advertising or on labels are certainly not and prudent marketers should consider the net impression created through all elements of their offerings, including their prices.

(Description of graphic for visually-impaired readers: a drawing of two eggs, one with a mustache.) 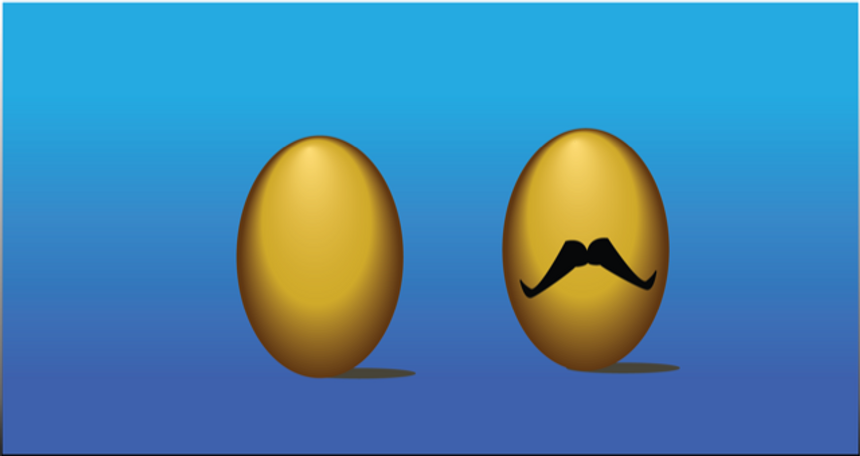