The bold headline screams “Official Election Defense Fund” and features a photograph of soon-to-be-ex-president Donald Trump.  The copy underneath breathlessly announces “President Trump needs YOU to step up to make sure we have the resources to protect the integrity of the Election!  For a short time, ALL GIFTS 1000%-MATCHED!”  It goes on to further state that there is "FRAUD like you've never seen..."

Trump’s relentless fundraising since his defeat at the polls has been covered widely, but I thought I’d add my two cents, from my own vantage point as an advertising lawyer.  Much has already been said about the fact that Trump’s disclosures about where the money is going are far from clear.  (See the New York Times’s coverage here.) To reiterate, although the copy on the fundraising page and, reportedly, in the emails, says that contributions are for Trump’s “Election Defense Fund,” the small print below the fold says that “75% of each contribution first to Save America, up to $5,000/$5,000, then to DJTP’s Recount Account, up to a maximum of $2,800/$5,000.  25% of each contribution to the RNC’s Operating account, up to a maximum of $35,500/$15,000. Any additional funds will go to the RNC for deposit in the RNC’s Legal Proceedings account or Headquarters account, up to a maximum of $213,000/$90,000.”  Crystal clear, right?

To translate, according to a source quoted by the New York Times, that means that “small donors who give thinking they’re helping to defend the integrity of our election are in fact largely helping to finance Trump’s post-presidential political ventures.”  Will his supporters care?  Maybe not.  But as an advertising lawyer, I don’t like headlines that scream one thing and disclosures that say another.  Disclosures are meant to explain and qualify, not contradict.  And, as we know, even if as few as 20% of target audience members are misled about the meaning of an advertising claim, that claim may be considered false and potentially actionable.

Another claim in this appeal strikes me as concerning from an advertising law standpoint: “ALL GIFTS 1000%-MATCHED.”  I don’t think I’ve ever seen a 1000% match! And I rarely see a matching donation campaign that isn’t capped at a certain amount because the person or entity providing the matching funds is only willing to give up to a certain amount, which is disclosed in the copy.  There’s no cap stated in this copy.  And who is the person or entity matching the contributions here?  The copy doesn’t say. And, though I’m no elections lawyer, I would think that even matched funds would be subject to campaign contribution limits.  And, is there even a match taking place, or has someone just promised a certain donation amount that will be provided regardless of individual contributors’ actions?  If so, though promising that donations will be matched – 1000%! --  may be very compelling, it is not truthful.

As we all know, politicians are not “hampered” by the same truth-in-advertising laws and principles governing brands. That pesky First Amendment!  But as an advertising lawyer, I still think the standards of truthfulness, transparency and fact-based proof should prevail.

(Description of graphic for visually-impaired readers: drawing of a $100 bill with Donald Trump's face in the center.) 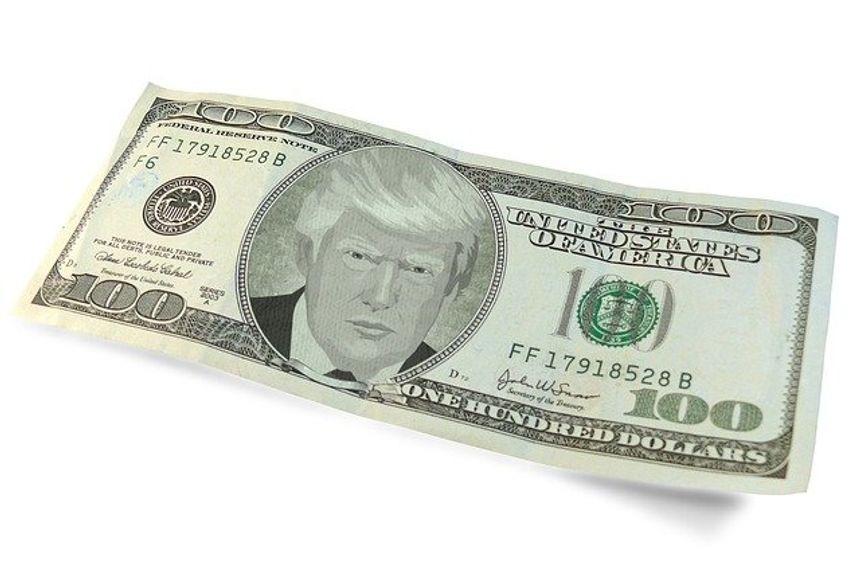