Like many people around the world right now, I have found myself doing some baking.  Here's a case about the marketing of baking chips that is of particular interest to advertising lawyers, like me, who are under a "stay-at-home" order.

Ghirardelli Chocolate Company sells bags of "Classic White Chips" for making cookies and other baked goods.  The packaging shows a picture of cookies with white chips in them, along with the statement, "Premium Baking Chips."  Here's the issue.  They're not white "chocolate" chips.  They're simply "white chips" made from other types of ingredients, such as sugar, palm kernel oil, and whole milk powder.

The plaintiff sued, alleging that she was misled into buying the "white chips" because she was under the misimpression that these chips actually contained chocolate.  Essentially, her argument is that consumers will understand "white chips" to mean "white chocolate chips."  She asserted claims under California's Unfair Competition Law, False Advertising Law, and Consumer Legal Remedies Act.  Ghirardelli moved to dismiss the complaint, and the United Stated District Court for the Northern District of California agreed.  Here's why.

In order to determine whether Ghirardelli's packaging for its "white chips" is misleading, the court used the "reasonable consumer" test.  In California, the plaintiff must show more than a mere possibility that consumers might be misled.  Rather, the plaintiff must demonstrate a probability that, "a significant portion of the general consuming public or of targeted consumers, acting reasonably under the circumstances, could be misled."

Here, the court simply did not buy the argument that a reasonable consumer would necessarily understand "white chips" to mean that the chips contained chocolate.  Noting that there is nothing on the packaging that affirmatively states that the chips contain chocolate, the court held that the use of the word "white" simply describes the color of the product, not what its ingredients are.  The court analogized, "white wine may define the characteristic of the wine's color but does not inform the consumer whether the wine is a zinfandel or gewurztraminer."  The court concluded, "Simply because some consumers unreasonably assumed that 'white' in the term 'white chips' meant white chocolate chips does not make it so."

And what about the picture of the cookies with the white chips in them?  The court didn't believe that this communicated that the chips had chocolate in them either.  The court wrote, "it is not reasonable to conclude from an image of a cookie with chips a specific message about the quality of those chips."

Notwithstanding Ghirardelli's victory here, it highlights the importance of being careful about how you describe and depict your product.  These types of lawsuits are common -- and this case could have easily come out differently.  What's a bit surprising to me about this case is that it didn't struggle with the question of what reasonable consumers would actually think that the chips were (if they weren't white chocolate).  While the court relied heavily on the fact that there were not express misrepresentations on the packaging that the chips contained chocolate, the court didn't come up with any theories about what consumers -- in light of their understanding about what types of cookies people make -- thought those white chips actually contained.  Another court could have been more troubled by this.

Another important takeaway from this decision is that, if you're planning on making white chocolate chip cookies during this very strange time we're all living through right now, you'd better read the label.

"Simply because some consumers unreasonably assumed that 'white' in the term 'white chips' meant white chocolate chips does not make it so." 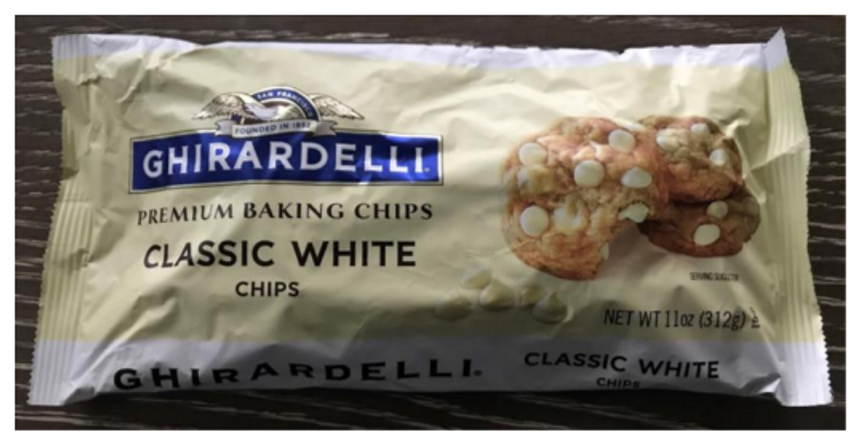