Last week, Massachusetts Attorney General Maura Healey sued e-cigarette retailer Eonsmoke, alleging that the company illegally marketed its vaping products to children.  The AG also alleged that Eonsmoke failed to verify the age of online purchasers of its products and failed to ensure that shipments of these products were received by a person 21 years or older, the state’s minimum legal sales age for smoking products.

While this action is more evidence that Juul and other e-cigarette retailers are going to be facing increasing scrutiny about their marketing tactics, the complaint in this case also provides useful insights for advertisers about how to avoid engaging in marketing tactics that are seen as directed to children.  Here are some important take-aways.

Don't design the product so that it is appealing to children.  The AG pointed to the fact that Eonsmoke sells e-liquids that come in more than fifteen sweet fruit flavors, including sour gummy, pink lemonade, pineapple crush, and peach madness.  The AG also said that Eonsmoke sells e-liquids that are associated with candy and cereal flavors that are appealing to kids, including gummy bear, donut cream, and cereal loops.  In addition, the AG said that Eonsmoke's products were more appealing to kids because they were customizable with skins, colors, finishes, and accessories.  It's important to consider, then, whether the product design itself may have particular appeal to kids.

Don't use social media content that may be appealing to children.  The AG alleged that Eonsmoke used social media to promote its products as "cool, sexy, a social necessity, sweet like candy," and better and cheaper than other products.  The AG pointed to examples of social media posts that included references to candy, a character from "The Simpsons," and the fact that the product is concealable.  Where content may have appeal to both kids and adults, it's important, then, to try to avoid content that may be seen as having some particular appeal to kids.

Don't use hashtags that may have youth appeal.  The AG alleged that by using certain hashtags -- such as #juulnation, #juulgang, #juulmemes, and #vapetricks -- the company knew or should have known that it would target an underage audience.  The AG said that thousands of posts containing these hashtags promote the use of vaping products by kids, including showing kids vaping and doing vaping tricks, cartoon imagery, pop culture memes, and sexual imagery.  These allegations have pretty significant implications.  The AG appears to be taking the position here that, in some situations, you're not only responsible for the content of your own social media posts, but for other posts that use the same hashtag.

Make sure your celebrity influencers don't have large numbers of youth followers.  The AG alleged that the influencers chosen by Eonsmoke were popular with kids.  If your'e trying to avoid marketing to kids, it's important, then, to get good data about the demographics of the influencers you are working with.

Ensure that influencer content doesn't target kids.  The AG said that the content created by Eonsmoke's influencers also had particular appeal to children.  For example, the AG pointed to one influencer video entitled, "How to HIDE and HIT Your JUUL at SCHOOL WITHOUT getting CAUGHT."  The AG also alleged that other influencer content promoted the use of vaping products with sexualized, profane, and sophmoric humor targeting kids.  Before choosing an influencer, you should consider what other content the influencer has posted -- and whether that content has particular appeal to kids.  And, when an influencer is posting on your behalf, it's important to have procedures in place to ensure that the content is consistent with your own brand strategy and guidelines. 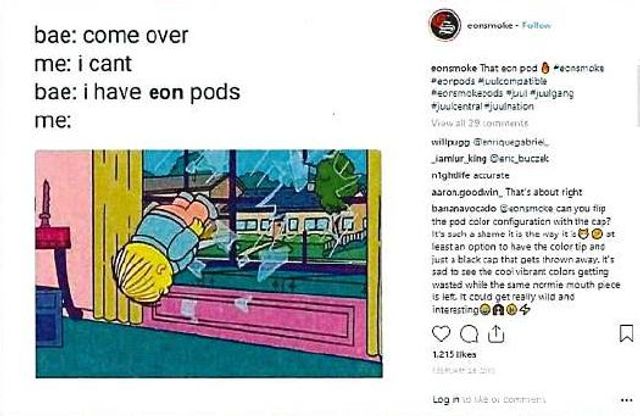