A recent article in Law360 caught my eye: it described a pending motion to dismiss in a deceptive marketing case in which the Doe class plaintiffs asserted RICO violations.  You don't see that everyday!  But the allegations are especially grave ones; this is not your garden variety false advertising case.  Plaintiffs allege that the defendants "operated a large and complex enterprise with a singular goal: to enrich themselves by systematically defrauding economically marginalized people looking to invest in their educations, start their own small businesses, and pursue the American Dream."

Oh, and the defendants are The Trump Corporation, Donald Trump and three of his children, Don Jr., Eric and Ivanka.

According to the amended complaint, at the heart of the fraudulent scheme was American Communications Network, a multi­level marketing company selling videophones. Defendants are alleged to have received "millions of dollars in secret payments to promote and endorse" the company and its products, "bombastically" telling prospective investors that the products were selling like hotcakes, that investors could invest without risk and that Trump, personally, had "done a lot of research" and that his endorsement "was not for any money." However, according to the complaint, "[n]ot a word of this was true."  Further, the defendants amplified all of these messages by providing a platform for the company on The Celebrity Apprentice and by appearing publicly at events sponsored by ACN, with which they are alleged to have a number of other "side deals" and financial ties.

Worse, the complaint alleges, the "victims were then and are now among the most economically marginalized and vulnerable Americans. Indeed, the victims were specifically targeted because they were not experienced in financial and commercial matters" and they "suffered considerable financial loss because of their reliance on the false and willfully misleading [messages] disseminated by defendants."  One Doe plaintiff, a hospice worker "of limited resources," paid the $499 registration fee to participate in the program, and subsequently paid thousands of dollars in fees and expenses to attend ACN events and host ACN meetings in an effort to succeed with the business, in reliance on Trump's endorsement. "But, ultimately, she had extremely limited success—she earned a single check for $38."

The complaint also details various other business ventures operated by the defendants in the same manner and charges defendants with liability under RICO and well as under a number of state false advertising and unfair and deceptive trade practices statutes.  Plaintiffs seek compensatory and punitive damages, equitable monetary relief, and injunctive relief.

Defendants have moved to dismiss the amended complaint, arguing that the defendants' promotional statements on behalf of ACN were "opinion" and "puffery," upon which no "reasonable investor" would have relied.  Further, defendants argue, "Plaintiffs will be unable to establish more than that, no matter how seasoned and sophisticated the ACN marketing tools, the inherent challenges of cold-calling customers, even with the assistance of social media, are what caused Plaintiffs to fail as [independent business owners] and not recoup their expenses, and not the celebrity endorsement they say inspired them to enroll in the first place."

Stay tuned for more.  The case is pending in the Southern District of New York, before U.S. District Judge Lorna Schofield. 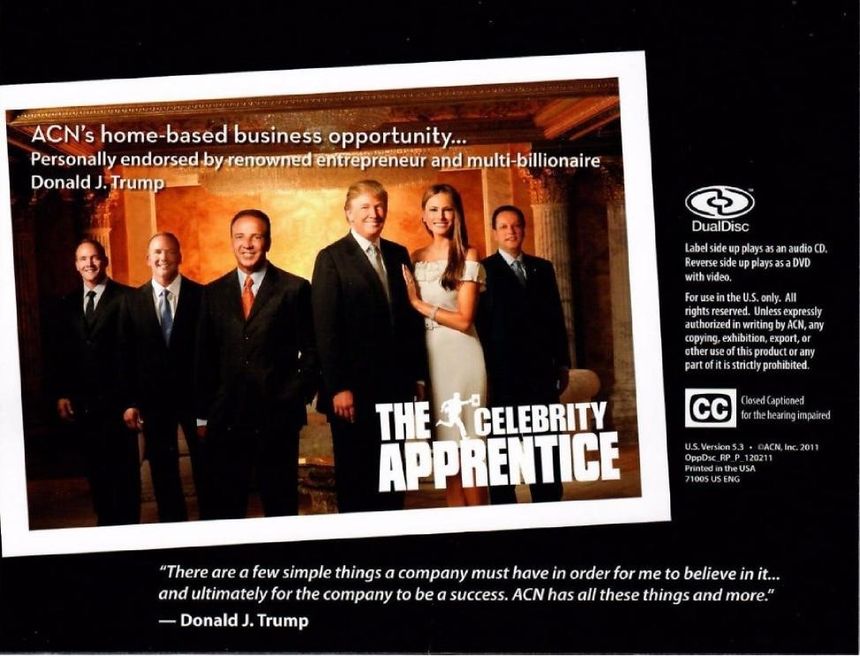