Back in 2017, Washington's Attorney General sued TVI, Inc., the for-profit company that owns Value Village, the country's largest for-profit thrift store chain.  The complaint alleged that the company misled consumers and donors into believing that donations and purchases would benefit various charities, and created the impression that Value Village itself is a non-profit or charity.  The lawsuit alleged that this deception is a violation of Washington's Consumer Protection Act and Charitable Solicitations Act.

The AG claimed that only after initiating its investigation, Value Village began paying charities for the donated items it sold at its stores, but only for pennies per item sold.  For example, the store might charge $80 for a table donated to it, and then give only 2 cents to a charity. Indeed, the AG claimed, "the... amounts [donated to the charities] are drastically lower than the impression created by Value Village’s ads, which create the impression that charities receive a significant benefit from donations made at Value Village stores."

To bolster its case, the AG commissioned consumer research, finding that more than 75% of Washingtonians surveyed in a test group believed that the company was a charity or nonprofit organization, and that 90% overestimated the amount of money the charity would receive from sales, with a majority of respondents believing that a charity would receive one third or more of the item’s sales price from Value Village.

In addition to misleading consumers and potential donors through its ads, Value Village also failed to include the disclosures required by the state's Charitable Solicitation Act, according to the AG's complaint.  The complaint alleged that Value Village, though registered as a fundraiser, failed to disclose its status as a for-profit commercial fundraiser, and failed to disclose certain contact information for the Secretary of State. "Not only are these disclosures required by law, they are important to donors, because without them, many Washington donors may be unaware of the fact that Value Village is actually a d/b/a of the for-profit corporate entity TVI, Inc."

As of this writing, I have been unable to access the briefs filed by Value Village.  But according to an article published about the litigation on Crosscut.com, Value Village is appealing a partial ruling from a King County Superior Court judge that allowed the AG to pursue the state’s claims.  According the the article, the defendants are asking the Court of Appeals to review the judge’s ruling in part on First Amendment grounds, i.e., that charitable fundraising is protected speech.

Although I haven't seen Value Village's arguments, it seems unlikely that a First Amendment argument will succeed if the Court is moved by the AG's evidence of deception: while speech is protected, false and deceptive speech is not.  (See here and here for other AGs' successful cases against deceptive fundraisers.) At least, not false or deceptive speech uttered by for-profit advertisers and fundraisers.

In fact, no portion of Value Village in-store sales benefits its charity partners, and contrary to Value Village's marketing, for years, some types of donations — including furniture and housewares — did not benefit charities at all. Others provided far less benefit than consumers were led to believe, or did not go to the charity indicated to donors. In many cases, the donations were in reality pooled and shared among multiple charities. 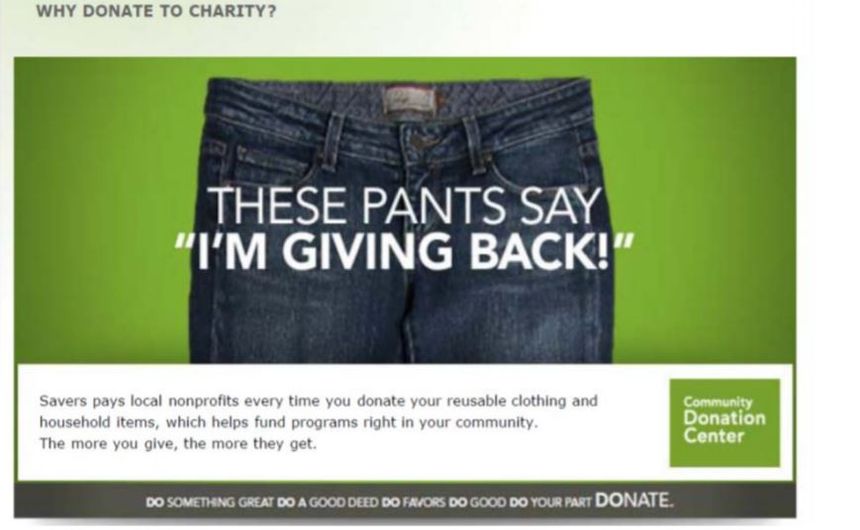