Oh, this is a fun one.  This past weekend, the Long Island based brewery, Blue Point Brewing Company, ran a full-page ad in the New York Times advocating the passage of a federal law to make Election Day a national holiday, so that more people can vote. The ad states that a majority of non-voters claim that work or school conflicts prevent them from getting to the polls.

To make its point, the company brewed a Voters Day Off beer and put a petition on the can.  Consumers can sign the can advocating for the day-off law and then send it to the Senate (before or after drinking the beer?). The ad also says that “proceeds benefit Rock the Vote” and that if the law passes, the company will sponsor an “epic cocktail hour” in Central Park, at which perhaps Taylor Swift and Kanye could be enticed to perform.

(1) Here’s a beer company doing non-partisan political advocacy that encourages the purchase of beer.  Americans can vote at 18 but can’t drink till they’re 21.  Note that the Beer Institute has promulgated a voluntary Advertising and Marketing Code which provides – among other things --  that “beer advertising should not suggest directly or indirectly that any of the laws applicable to the sale and consumption of beer should not be complied with.” Kids, you can send the can to your Senator; just don’t buy or drink the beer -- sign the online petition instead (link is in the ad).

(2) The ad says that “proceeds benefit Rock The Vote.”  That’s a commercial co-venture.  The ad is geared to New Yorkers and New York does not require registration of CCVs, so no problem there.  But, given recent enforcement in New York regarding charitable solicitations, the brewery better make good on its promise.

(3) It’s a pretty bold move to mention two huge celebrities in an ad, especially an ad by an alcohol brand.  Why a bold move? Because right of publicity laws protect individuals against the use of their names and likenesses for commercial purposes without permission. Celebrities are often quick to enforce their rights under these laws, even in the context of ads where it’s clear that they’re not endorsing the product itself.  Here, the brewery has a very respectable argument that this is not an ad in the traditional sense but First Amendment-protected political speech.  But, as a general matter, putting celebrities in branded content without permission is not for the faint of heart.

(4) I don’t know about you, but I can’t help but think about a certain famous beer drinker and his recent testimony before Congress and all I can say is TOO SOON.  But, anything that gets consumers -- I mean, citizens -- thinking about voting and out to the polls is a good thing.

We're proud to say that Blue Point employees will have Election Day off. But not everyone is lucky enough to work at a company with such progressive, good-looking and humble leaders. We need to rally our lawmakers to make Election Day a federal holiday so that all Americans have the same time and opportunity to vote. 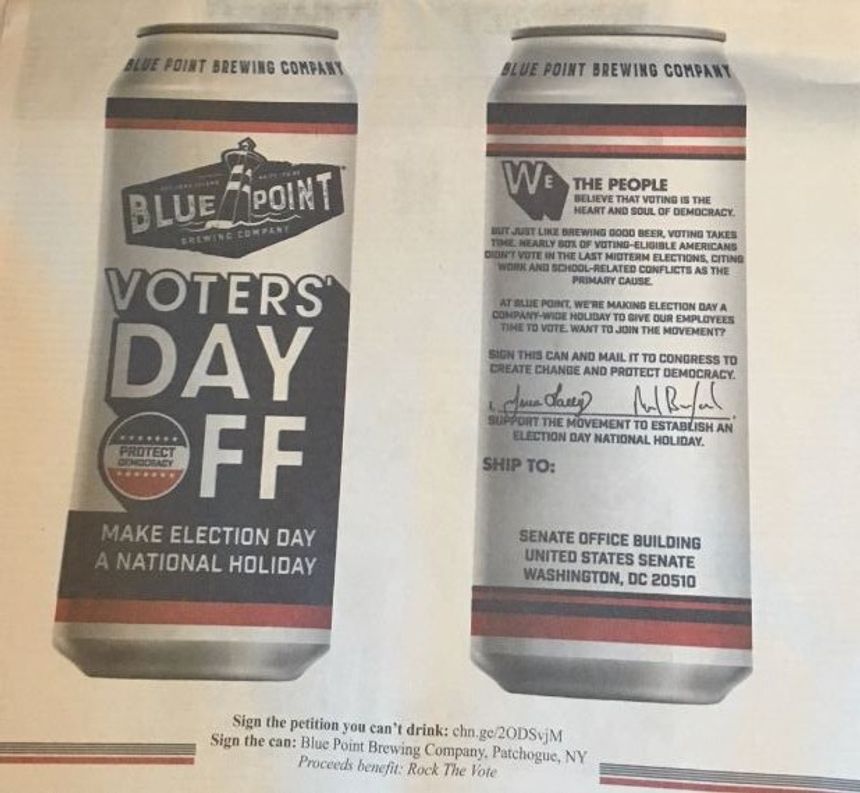