As a Brooklyn resident, I immediately paid attention to news about four lawsuits involving formerly hippie and now hipster beverage kombucha.  (For the uncool and uninitiated, kombucha is a fermented beverage, made with tea, sugar, and a culture called a SCOBY, which looks like a big mushroom.  People -- other than yours truly -- love the stuff and attribute various health benefits to it.)

Back in April, Tortilla Factory, maker of the Kombucha Dog brand beverage, sued four competitors, alleging that their beverages are mislabeled with respect to alcohol and sugar content.  Plaintiff alleged that it tested the alcohol content in the competitors' products and determined that their alcohol levels exceeded the .5% threshold necessitating a health warning statement under Alcoholic Beverage Labeling Act of 1988.  Plaintiff also alleged the competitors' labels understated the sugar content of their drinks.

One of these complaints has now been dismissed.  The Central District of California found three grounds warranting the grant of defendant Rowdy Mermaid's motion to dismiss.  First, the court found that the complaint did not sufficiently allege that plaintiff suffered injury as a result of any conduct by Rowdy Mermaid. Plaintiff had alleged that the two companies are “vying for the same dollars from the same consumers” and that the kombucha market is “sensitive to perceived health-benefits.”  However, the court noted, plaintiff failed to allege that the two companies’ products are sold in the same stores, through the same channels, or even in the same geographic areas.  Moreover, Plaintiff failed to allege any facts supporting its claim that Rowdy Mermaid’s purportedly inaccurate alcohol content labeling caused consumers to purchase Rowdy Mermaid products instead of plaintiff's.

Second, with respect to plaintiff’s claims regarding alcohol content, the complaint failed to specify which Rowdy Mermaid products were tested, what third-party lab performed the test, whether the tests were performed multiple times, or any details about the test itself or the specific results. And with respect to plaintiff’s sugar content claims, plaintiff did not allege to have even tested the sugar content of Rowdy Mermaid’s products. Rather, Plaintiff’s claims of inaccurate labeling were based “on information and belief” and the company’s "own experience brewing kombucha."  The court noted that "plaintiff has not stated any factual basis for this belief beyond mere suspicion, which is insufficient."

Finally, the court found that, under the doctrine of primary jurisdiction, "resolution of issues pertaining to the measurement of alcohol in kombucha is best reserved for the [Alcohol and Tobacco Tax and Trade Bureau] TTB." The court noted that "there appears to be a need to resolve the appropriate methodology for testing and labeling alcohol content in kombucha, which is better left to the expertise of the TTB rather than the courts."  Moreover, the court found, "Congress gave exclusive authority to the Treasury Department, which then delegated its duties to the TTB, to regulate the labels on alcoholic beverages. This regulation is comprehensive and requires both uniformity of administration and expertise that the Court lacks."

So, what's so special about this decision other than the fact that it involves an actual Lanham Act lawsuit over a niche hipster beverage?   First, it certainly demonstrates the importance of some key pleading issues: as the court noted, there are heightened pleading standards under the federal rules and these requirements apply to claims of unfair competition and false advertising under state and federal law.  Here, the plaintiff failed to adequately specify how the defendant was competing with it, and the actual factual basis for its charge of inaccurate labeling. Also, this decision -- like so many other recent cases -- highlights the give and take between regulatory standards and general truth-in-advertising principles. Courts may defer to the regulators to set the standards, as here, but compliance with those standards doesn't necessarily mean that advertisers are in the clear.  But that's a lawsuit for another day.

If manufacturers cannot ensure that the alcohol in their kombuchas remains consistently below 0.5% throughout the shelf life, they should stop falsely advertising them as soft drinks and compete “fairly” by selling them alongside alcoholic brands such as Kombucha Dog, argues a wave of new lawsuits. 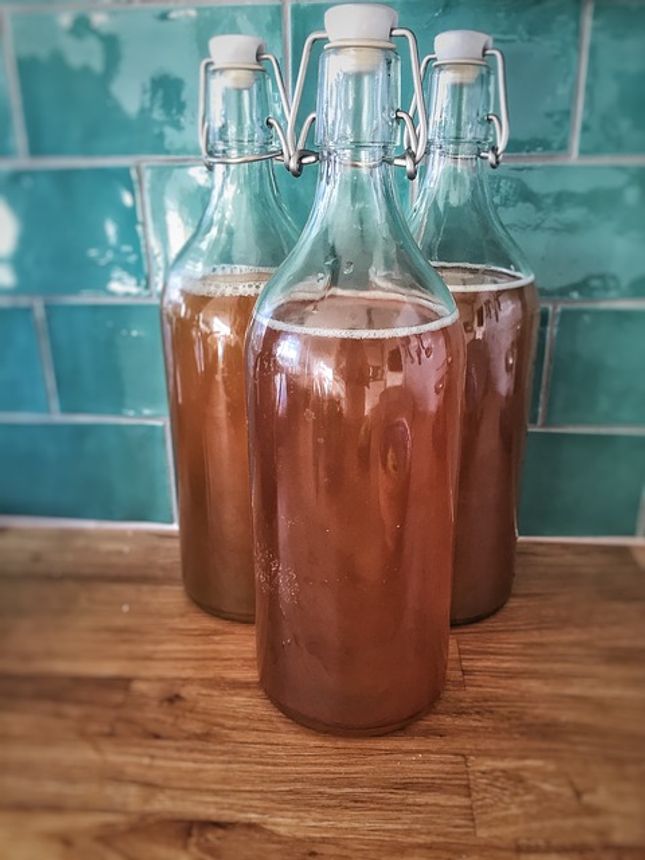