We've written quite a bit on this blog about the difficulty of substantiating "up to" claims, in light of the fact that courts, regulators, and our advertising self-regulatory system seem to have pretty different views about what "up to" claims actually communicate to consumers.  A recent decision from a federal court in New York, while interesting, doesn't help to clear up any of the confusion.  If anything, the court may have actually come up with an entirely new way to think about "up to" claims.

Retail chain Big Lots sells large canisters of Fresh Finds coffee that it promotes as being able to make "up to 210" servings of coffee.  A consumer sued, asserting false advertising and other claims under New York law.  She alleged that when she followed the instructions on the package, she was unable to brew "anywhere close" to that amount of coffee.  She claimed that, instead of 210 cups of coffee, she was only able to make 152 cups.  She alleged that not only did she not get the amount of coffee she was promised, "her discovery of the alleged discrepancy on the Product label has made her a fearful and embittered shopper, who 'wants to purchase ground coffee,' but finds herself 'unable to rely on the labeling of not only this Product, but other brands and varieties of ground coffee, because she is unsure of whether their representations are truthful about how much coffee they actually contain.'"

Big Lots moved to dismiss on various grounds, including because the plaintiff had failed to plausibly allege that a reasonable consumer would have been misled by the product label.

In evaluating the plaintiff's allegations, the court focused on the instructions provided on the packaging about how make the coffee.  According to the instructions, if you're just going make one serving of coffee, you'll need to use one tablespoon of coffee.  Based on the plaintiff's allegations, if you make one serving of coffee at a time, you'll only get 152 servings out of the package -- about 28% less than advertised.  The court noted, however, that if you followed the instructions for making larger batches of coffee, you could actually get 190 servings of coffee out of the package, which is only about 9% less than the advertised amount.

In what may come as a surprise to many, the court doesn't see this shortfall as a concern at all.  The court wrote, "While there is no fixed 'bright line' as to the precise point where a yield representation for a product intended to be prepared in varying strengths becomes a misrepresentation so material as to mislead a reasonable consumer, I am not convinced that plaintiff’s allegations are sufficient to nudge her claim over that theoretical boundary."

Another federal court -- considering very similar claims about coffee yield -- used what I would call the "ceiling test" for determining whether the "up to" claim was substantiated.  In other words, the court didn't think that "up to" meant that virtually all consumers would achieve the maximum results (the FTC standard) or that an appreciable number would achieve them (the NAD standard).  Instead, the court held that "up to" simply communicated that this was the maximum that consumers could achieve, under limited circumstances.

Here, though, the court seems to be applying an entirely new standard -- what I might call the "approximate test."  In other words, the court doesn't think that an "up to" claim necessarily communicates even what the maximum yield might be.  Instead, the court seems to believe that it communicates a rough approximation of what the maximum yield will be, taking into account that people's results will vary based on how strong they like their coffee (but not taking into account the label instructions).  The court wrote, "Indeed, 'up to' statements are generally not construed as concrete promises about a product’s maximum yield, particularly in relation to products such as ground coffee, for which it is well-known (and as the Product label reflects) that the greater the batch being prepared, the smaller the proportion of product that is necessary to produce a given strength." 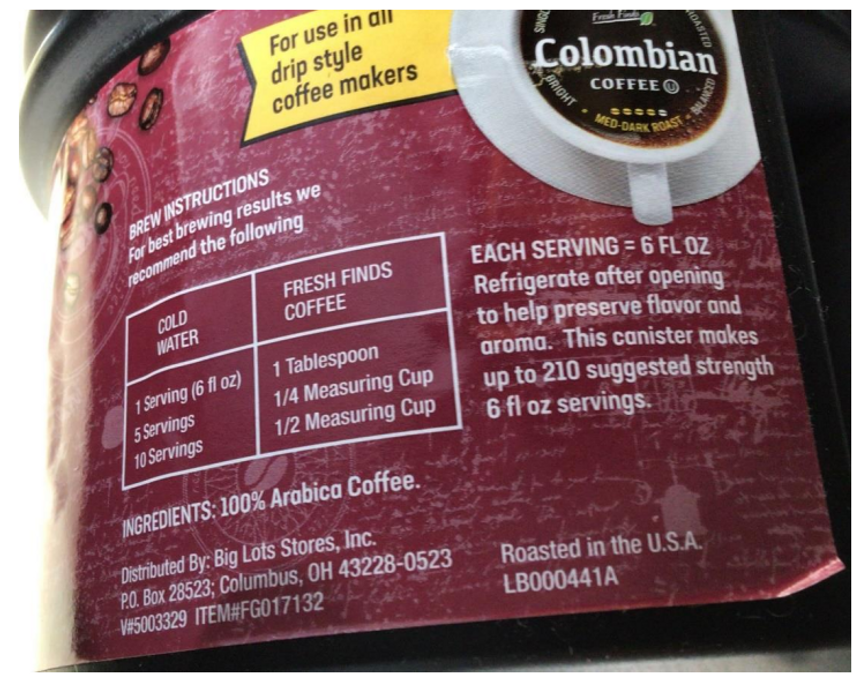