Film buffs may remember “Paper Moon,” the 1973 film directed by the late great Peter Bogdanovich. The film, set in Depression era America, starred father and daughter Ryan and Tatum O’Neal and the inimitable Madeline Kahn.  The elder O’Neal played a con man, Moses Pray, whose con was to visit recently widowed women and convince them that their deceased husbands had just ordered a fancy personally-inscribed Bible for them.  The widows would then pay the con man for the Bibles.  The movie is a charming comedy/drama.

In real life, however, targeting the vulnerable is not so charming.  Back in 2018, the New York Attorney General filed a lawsuit against Harris Jewelry, alleging that the company engaged in false and deceptive acts and illegal lending in connection with the financing of jewelry sales to active-duty service members. Now, the FTC has just announced that the company is entering into a settlement with the FTC and 18 states. The FTC and the Attorneys General alleged that Harris Jewelry used deceptive marketing tactics to induce active-duty service members, in particular young service members at the lowest military pay grade, to sign up for the company’s financing program. The company’s purported tactics included the sales agents falsely claiming that investing in the program would improve service members’ credit scores.  The agents also failed to provide the mandated disclosures for these arrangements; and failed to obtain the requisite affirmative consent for electronic fund transfers.

According to the complaint, as a result of Harris Jewelry’s tactics, tens of thousands of service members wound up with “high-interest loans on overpriced, poor-quality jewelry that saddled them with thousands of dollars of debt and worsened their credit.”

Thank you for your service indeed.

Based on these and other allegations, the FTC and the states charged the defendant with violation of the FTC Act, the Electronic Funds Transfer Act (EFTA), the Holder Rule, state law violations, and, for the first time, the Military Lending Act.  And, now, under the proposed order with the FTC and the state AGs, the company must stop collection of millions of dollars in debt, provide nearly $11 million in refunds for purchased protection plans, provide refunds for overpayments, and assist consumers with cleaning up their credit reports.  The company also must complete its shutdown of operations and to dissolve pursuant to applicable state laws once it meets the obligations of the order.

This is not the first, and will certainly not be the last, enforcement effort aimed at the predatory and deceptive advertising and practices targeting service members.  As reported by the New York Times, “soldiers’ steady paychecks — and the financial naïveté of many young recruits — are a potent lure for hucksters.”

Our troops bravely put our protection above their own and deserve to be treated with integrity and respect. Predatory lenders and businesses harming servicemembers should be warned that their actions will not be tolerated. 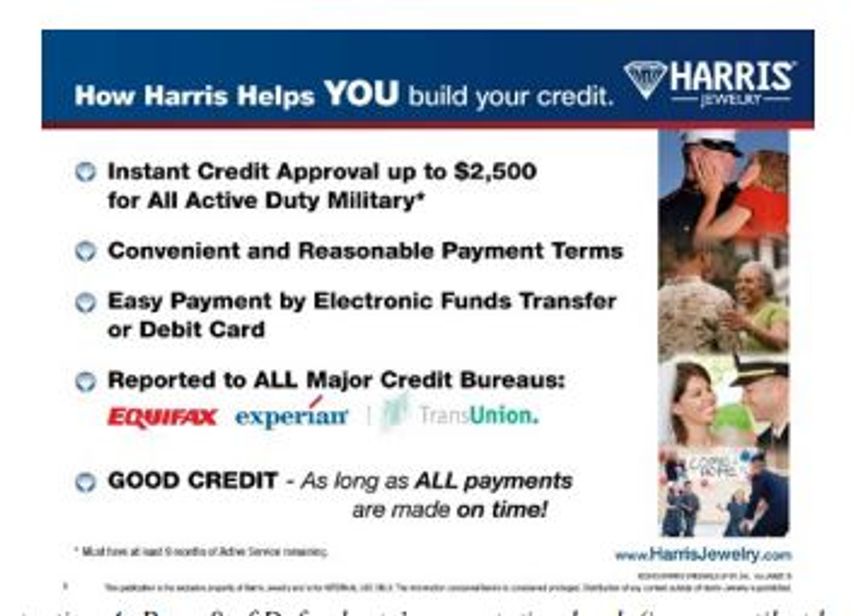