This enforcement action is worth a close look by online retailers, since the NYAG's allegations here provide a great roadmap for a whole host of deceptive marketing tactics to look out for and avoid.

The NYAG charged that Fareportal used "nefarious" marketing tactics known as "dark patterns" to manipulate and trick consumers into buying airline tickets and hotel rooms.  While dark patterns can take many forms, they're often thought of as user interface designs and other marketing tactics that are employed by online marketers to manipulate consumers' ability to make informed choices about the products and services they are buying.

The NYAG also alleged that Fareportal created false urgency by falsely claiming that a specific number of consumers were currently looking at the same tickets, such as, "33 people are looking at this flight."  The NYAG charged that the number shown was actually randomly generated and didn't bear any relationship to the number of consumers, if any, that were actually considering buying those tickets.

The NYAG also said that a countdown displayed -- that supposedly showed the amount of time left before tickets ran out -- was also fake.  The NYAG charged that, "the time left in the running countdown timer was arbitrary and unrelated to the availability of tickets.  Fareportal did not reserve tickets for the consumer while the timer was counting down; indeed, another consumer could have selected and purchased the selected tickets at any time."

The NYAG charged that Fareportal engaged in some similar practices in connection with the sale of hotel rooms as well.

Specifically, the NYAG alleged that Fareportal marketed "certain airline tickets on its websites using price comparisons that appeared to show that Fareportal was offering tickets for sale at a discounted price."  The NYAG charged, however, that the slash-through pricing shown by Fareportal, which made it appear that tickets were being offered at a discount, did not generally reflect actual savings.  The NYAG explained, "In most cases, the advertised tickets were never offered for sale at the higher, slashed through comparison price."

The NYAG also alleged that, when breaking down the elements of the price, Fareportal misrepresented what "Taxes and Fees" included.  Specifically, even though Fareportal's service fees were listed under "Taxes and Fees," they were not actually included in the amount charged for taxes and fees.  Instead, the service fees were charged as part of the base price for the tickets.

In addition, the NYAG alleged that Fareportal misled consumers about its policies for cancelling ticket purchases.  The NYAG charged that, although Fareportal advertised "24-hour cancellation," it didn't clearly and conspicuously disclose that consumers would be charged a cancellation fee.  The NYAG explained that, "Fareportal disclosed this information through a pop-up window that was activated only if a consumer clicked the small 'i' icon next to the '24-hour cancellation' and in the terms and conditions displayed in fine print during check out."

In the Assurance of Discontinuance entered into with the New York Attorney General, Fareportal agreed to pay $2.6 million in disgorgement and costs.

Fareportal also agreed not to make false claims in the future about airline ticket and hotel room availability or about the number of people who are currently reviewing or have purchased the same same tickets or add-ons.  In addition, if Fareportal uses a countdown timer, it agreed that it will explain the consequences of the timer running out of time.

Regarding pricing claims, Fareportal agreed to only engage in strike-through pricing if the item was available for purchase by the public "in reasonable quantities and for a reasonable period of time" either immediately prior to the offer or during a time frame that was clearly disclosed.  Fareportal also agreed to clearly identify and describe the comparison price, and not to use a comparison price that was used for the purpose of establishing a fictitious price.

The Assurance also requires Fareportal to properly identify its service fees and to clearly and conspicuously disclose that service fees apply when purchases are cancelled.

On one level, there's no big news here.  At its most basic, this enforcement action really just communicates the importance of telling the truth, not misleading consumers, and clearly and conspicuously disclosing material terms and conditions.

The fact that the NYAG characterized the investigation as a "dark patterns" case is significant, though.  While the dark patterns allegations here are largely based on the use of false claims, the case highlights the fact that regulators are concerned about marketing practices that may impact consumers' ability to make free and fully informed choices, even when those practices don't involve (expressly) false claims.  The use of a countdown clock is a great example.  Is the use of a countdown clock, that doesn't tell you what will happen when the time expires, a "dark practice" because it misleads you into thinking something will happen -- even if the marketer doesn't make any express claims about that?  We're going to see a lot more attention to "dark patterns" from regulators in the coming months and years, both in the United States and around the world.

This case is also a great reminder that the "everyone is doing it" defense isn't likely a defense at all.  While you might see other online marketers engaging in practices that create false urgency, or that exaggerate the demand for their products, that doesn't mean that those claims are legal.  It just means that they haven't been targeted yet.

And, finally, this case is yet another in a long line of regulatory enforcement actions that emphasizes the importance of disclosing material qualifications clearly and conspicuously.  Regulators will tell you that consumers have virtually no obligation to hunt for important details.  If there's something that consumers need to know, you must ensure that the information is prominently disclosed, in a place where consumers won't miss it.  Disclaimers hidden by an inconspicuous question mark, or that are buried at the bottom of the page, are unlikely to convince a regulator that you've told consumers what they need to know. 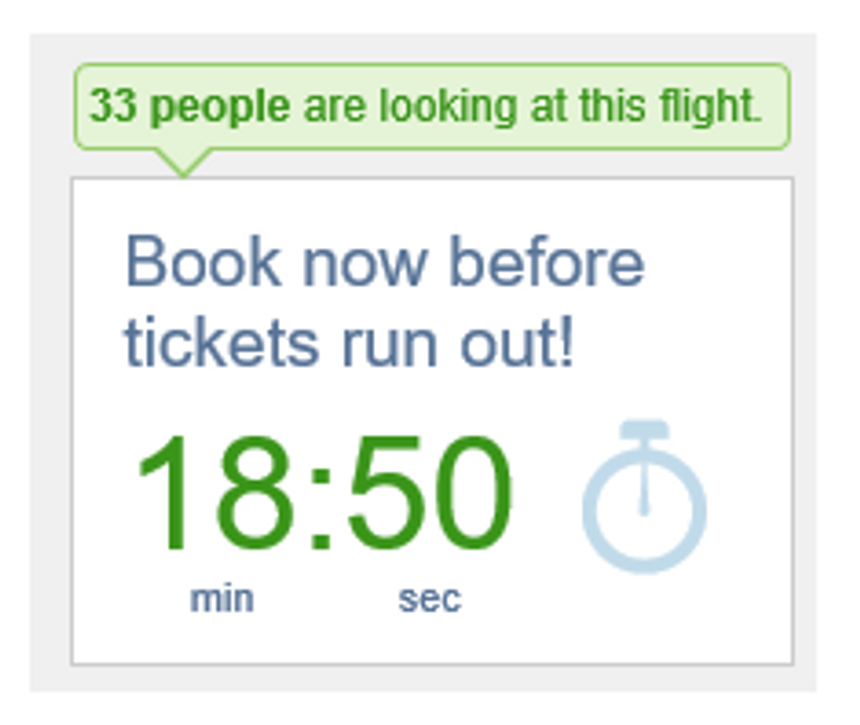