The Unstereotype Alliance, an industry-led initiative convened by UN Women that is encouraging marketers to move away from using stereotypes in advertising, recently released the results of a study measuring the progress that marketers made in 2021.  The study measured more than 300,000 ads across 70 countries.

While some progress has been made, the study found that that there is still considerable work to be done.  Here are a few key findings.

In 2021, more ads included diverse skin colors and ethnicities.  The study found that 35% of ads depicted a mixture of skin colors or ethnicities, up from 22% in 2020.  The study also found that progressive depictions of men and women improved.  In addition, since 2018, both women and men are more likely to be present in advertising together, with the sole male presence declining.  And, women are also increasingly being given speaking lines in advertising.

On the other hand, men and women are still generally shown playing traditional roles -- with only 8% of women and 9% of men being cast in non-traditional roles.  The study also found that, in 2021, fewer ads depicted men with diverse body types.  In addition, the study found that while ageism "still abounds" in advertising, more men and women aged 40+ are being depicted.

For some concrete guidance about how to address your brand's use of stereotypes in advertising, check out UNICEF's recent report, Promoting diversity and inclusion in advertising:  a UNICEF playbook.  I'll be discussing the report, in a virtual fireside chat, with Shreyasi Jha, Senior Gender Advisor, at UNICEF, on Wednesday.  No pre-registration is necessary.  In order to join the fireside chat, which is sponsored by the International Advertising Association, simply join the livestream here on YouTube at 9:00 a.m. ET. 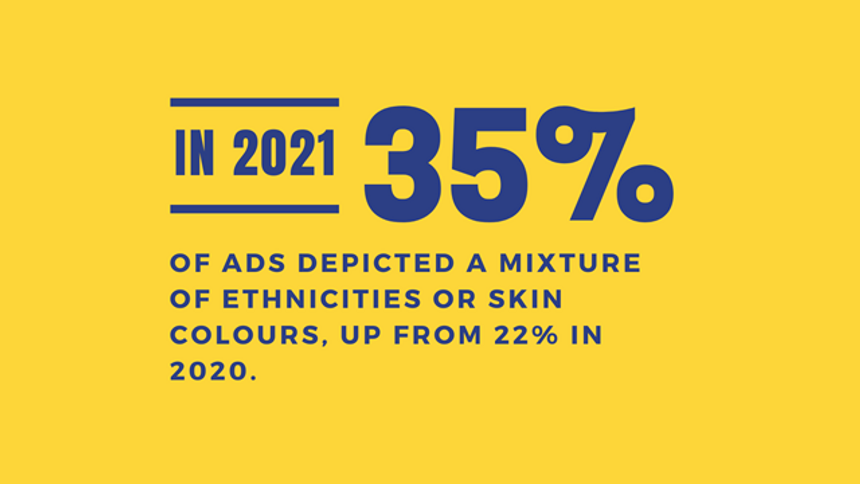