Can you advertise tea as having been made in the United States if the tea itself is grown overseas?  That was the issue in a recent lawsuit brought against tea company R.C. Bigelow, the maker of the famous "Constant Comment" black tea.

The front of the packaging for Bigelow teas -- such as Earl Grey, English Teatime, and "Constant Comment" -- says that the product is "America's Classic."  On the back, the packaging states, "Manufactured in the USA - 100% - American Family Owned."  Suing under California law, the plaintiffs alleged that these statements are false and misleading because the tea is grown on tea plantations, and processed by tea processing plants, located overseas, such as in Sri Lanka and India.  The plaintiffs also alleged that some of the additional flavors and spices used by the company are also imported.

Bigelow moved to dismiss, arguing that (1) no reasonable consumer would be misled by the packaging, (2) the challenged statements are non-actionable puffery, and (3) the challenged statements are true.  The United States District Court for the Central District of California denied the motion to dismiss the plaintiffs' core claims, and allowed the case to continue.  Here's why.

In order to state a cause of action under California's consumer protection statutes, the plaintiffs must plausibly allege that a "reasonable consumer" is likely to be deceived by the advertising.  This means that there is "a probability that a significant portion of the general consumer public or of targeted consumers, acting reasonably in the circumstances, could be misled."

As an initial matter, the court found that it was plausible that a reasonable consumer, viewing Bigelow's claims together -- "America's Classic," "Manufactured in the USA," "100%," and "American Family Owned" -- would understand them to mean that Bigelow's products are manufactured in the United States.  The court wrote, "Accepting the allegations as true, Plaintiffs' have plausibly alleged that the representations are likely to deceive reasonable consumers."

The court also said that, at least at the motion to dismiss stage, it wasn't going hold that "America's Classic" is non actionable puffery, since the statement could contribute to the alleged deception created by the packaging as a whole.  The court wrote, "even statements that might be innocuous puffery or mere statement of opinion standing alone may be actionable as an integral part of a representation of material fact when used to emphasize and induce reliance upon such a representation."

In addition, the court looked at the plaintiffs' claims under Section 17533.7 of California's Business and Professions Code, which prohibits the labeling of a product as made in the United States if it has "has been entirely or substantially made, manufactured, or produced outside of the United States."  Bigelow had argued that the claim asserted under California's own "Made in USA" law should be dismissed because (1) the statement "Manufactured in the USA - 100% - American Family Owned" is true, (2) the labeling doesn't state that its products are "made" in the United States and that the statement is qualifying in and of itself, and (3) the packaging contains a qualifying statement on the side panel.

Regarding Bigelow's first argument -- that the statement is true -- the court held that it was premature at the motion to dismiss stage to evaluate whether the claim was substantiated.  The court acknowledged, however, that the plaintiffs were going to have to demonstrate more than the fact the tea leaves themselves came from overseas; they were going to have to demonstrate that the tea was in fact processed overseas.  The court wrote, "One would not violate the statute by making, manufacturing, or producing merchandise solely in he United States even though using raw materials acquired from a foreign source."  (This is at odds with the FTC's Enforcement Policy Statement on U.S. Origin Claims, which would likely prohibit a product made entirely of imported material from being advertised as made in the United States.)

The court also rejected Bigelow's second argument -- that the statute doesn't address the use of the term "manufactured."  The court explained that the statute prohibits not only the misleading use of the words "Made in U.S.A.," 'Made in America," and "U.S.A.," but also prohibits the improper use of "similar words" as well.

Finally, the court also didn't buy Bigelow's third argument -- that a statement on the side of the packaging, in a small font, that said "Blended and Packaged in the U.S.A." adequately qualifies Bigelow's U.S. origin claims.  The court wrote, "The court fails to see how this overall impression could be dispelled by the significantly smaller font statement on the side panel . . . ." 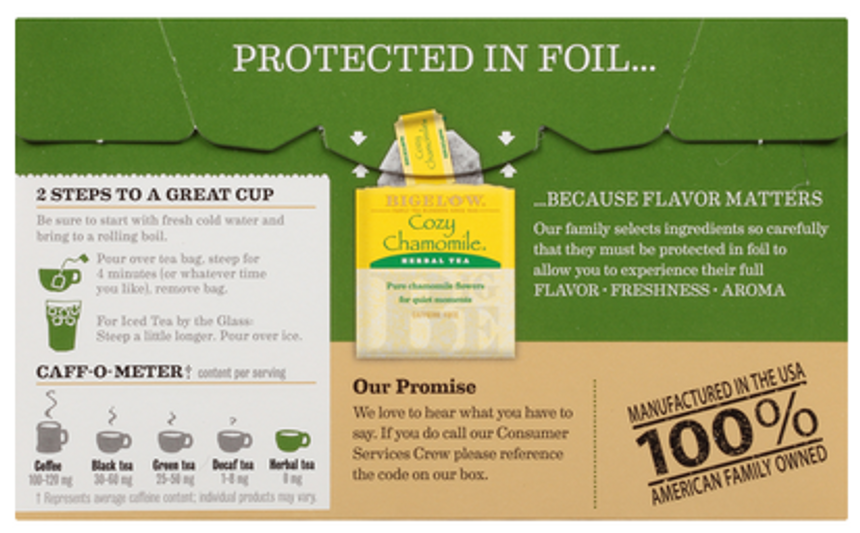