Two new decisions from the Southern District of California remind us, once again, that automatic renewal programs are not only a frequent area of legislative activity, but a favorite of the plaintiffs’ bar.  Although California courts have held that California’s automatic renewal law (“ARL”) does not itself have a private right of action, they have also stated, as does one of the decisions here, that “a consumer who has been harmed by a violation of the ARL may bring a claim pursuant to other consumer protection statutes, including the FAL [False Advertising Law], the CLRA [Consumer Legal Remedies Act], and the UCL [Unfair Competition Law].”

In one of the cases, the plaintiff alleged that he was unwittingly enrolled in Bed Bath & Beyond’s Beyond Plus program, in which, for 29 dollars a year, customers receive a 20 percent discount on all of their BB&B purchases and free shipping.  The plaintiff claimed that when he made a purchase on the BB&B site, he was charged for the Beyond Plus program and that the defendant did not adequately disclose that the program would automatically renew every year.  He filed an action under the ARL, the CLRA and the UCL.  The defendant filed a motion to dismiss.

Although the defendant argued that the ARL was intended to cover just magazine subscriptions, the court rejected that argument.  It stated that “[a]lthough the Legislature relied on investigations into magazine subscriptions when drafting the statute, there is nothing to suggest it intended to limit the protections under ARL to magazine or periodical subscriptions.”  Next, defendant argued that it satisfied the requirements of the ARL by including the requisite disclosures “through a hyperlink that was a few centimeters from the request for consent.”  The court rejected that argument as well, holding that “the terms themselves—not the access point to them—need to be in visual proximity to the request.” Although, as the court acknowledged, the use of hyperlinked terms is often adequate, even to form a contract, the ARL itself specifically requires more: “the disclosure of terms in a specific manner and location.”  Thus, “[g]iven the terms appear nowhere near the request for consent, Plaintiff has plausibly alleged Defendant did not comply” with the statute.   And, although plaintiff’s pleadings were deficient as to other factual allegations, the court granted him leave to amend.

In the second case, putative class action plaintiffs sued a large magazine publisher and its fulfillment vendor, claiming that the defendants violated the ARL by failing to disclose all of the required automatic renewal offer terms, failing to disclose the automatic renewal offer terms in a clear and conspicuous manner, and charging plaintiffs’ credit cards for magazine subscriptions without obtaining their consent to the automatic renewal offer terms.  They further alleged that “at each step of their purchases of the magazine subscriptions, Defendants’ forms, emails, and webpages either did not contain any disclosure that the subscriptions would be automatically renewed or contained a disclosure that omitted required terms and that was in a type smaller text than the surrounding text.”  As a result, plaintiffs claimed, they didn’t know that they were enrolling in continuous service programs and, if they had, they would not have subscribed to the magazines.

The Court determined that plaintiffs’ factual allegations were sufficient to plead a violation of the ARL, and thus state a claim under the UCL and FAL, notwithstanding the fact that included in the allegations was the fulsome disclosure actually used in at least one of the solicitations: “Continuous Service Program: I understand that unless I tell you otherwise, I will receive uninterrupted service and access; my subscription(s) will be automatically renewed at the end of each subscription term, at the rate(s) then in effect. I authorize you to fulfill my subscription(s) and charge the credit/debit card if provided, or send me a bill if not. I won’t be bothered with any renewal notices, instead, I will receive a clearly marked reminder notice with the then current rate(s) about 30 days prior to charging my credit/debit card or receiving a bill. I may opt out of the automatic renewal at any time by contacting customer service referenced below and receive a refund for all undelivered issues.”  However, this disclosure was allegedly “in a type smaller than the surrounding text.”

It appears that the courts – or at least the Southern District of California – will allow a case to move past the pleading stage if plaintiffs allege even technical noncompliance with the requirements of the ARL.  Therefore, it is certainly worth reviewing those requirements if you’re offering any kind of continuous service program to California residents.  And remember that New York has just enacted very similar ones.

(Description of graphic for visually-impaired readers: the words "I agree" next to a un-checked check box, with a pen nearby.) 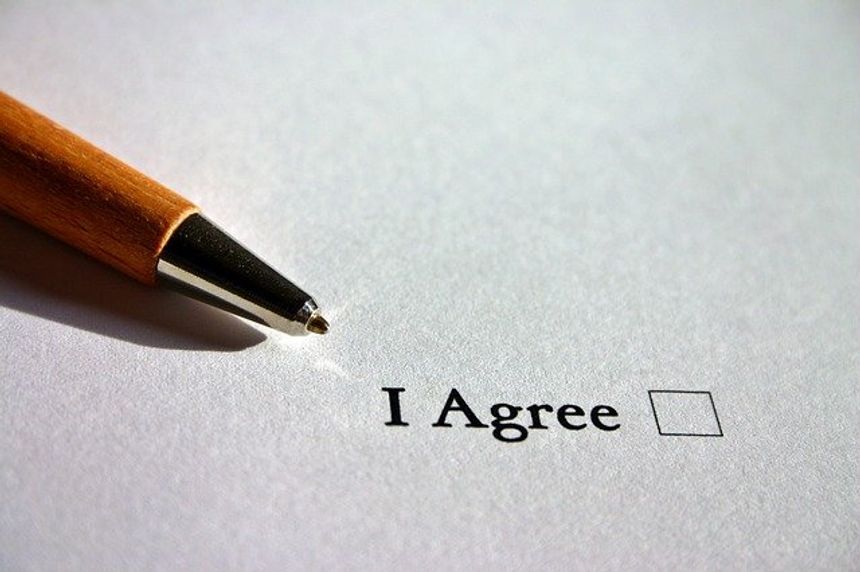