Apparently in response to the backlash over Goya CEO Robert Unanue praising President Trump while visiting the White House, White House advisor Ivanka Trump tweeted a photo of herself holding a can of Goya black beans with the statement (in both English and Spanish), "If it's Goya, it has to be good."

Whether you're interested about the propriety of Ms. Trump's tweet, or you're thinking about partnering with a member of executive branch for your next campaign, here's what the rules have to say.

The United States Office of Government Ethics rule on "Endorsing Organizations, Products or Persons" states that "Executive branch employees may not use their Government positions to suggest that the agency or any part of the executive branch endorses an organization (including a nonprofit organization), product, service, or person."

There are several exceptions to the rule, however.  An executive branch employee may give an endorsement when statutory authority exists for an agency to promote products, services or organizations, the agency documents compliance with agency requirements or standards, or the agency gives recognition for achievement under an agency program of recognition for accomplishment in support of the agency's mission.

Here's the example that the OGE gives as a endorsement that would be prohibited by its rules:  "A commissioner of the Consumer Product Safety Commission (CPSC) may not appear in a TV commercial in which she would endorse a blender produced by her former employer and would state that it has been found by the CPSC to be safe."

And, here's an example of something that the OGE says would not be prohibited by the rules:  "The Administrator of the Environmental Protection Agency may sign a letter to an oil company indicating that its refining operations are in compliance with Federal air quality standards even though he knows that the company routinely displays letters of this type in TV commercials portraying it as a 'trustee of the environment for future generations.'"

So, did Ms. Trump's tweet violate the OGE's rules?  That's for the OGE to decide.  But, Walter Shaub, who was the director of the OGE from 2013 to 2017, said, "Ms. Trump's Goya tweet is clearly a violation of the government's misuse of position regulation." 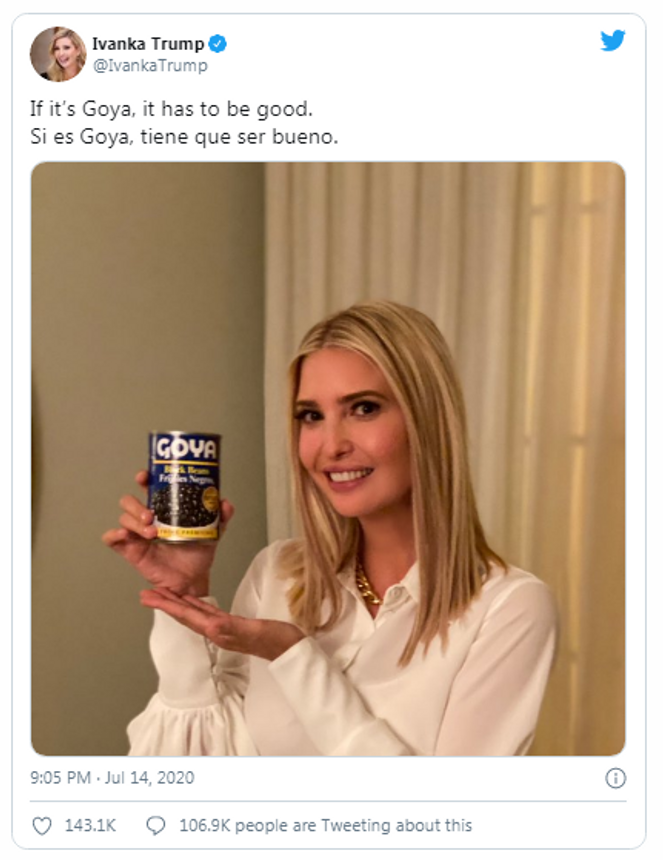