If you offer a "100% Satisfaction Guarantee" on your product, are you promising that consumers will, in fact, be satisfied by the product?  And, if so, do you need to have substantiation for that claim?  That was one of the issues in a recent lawsuit over light bulb marketing in the Southern District of New York.

In Wedra v. Cree, Inc., the plaintiff sued Cree, a light bulb manufacturer, alleging that the company made a variety of false claims (under New York law) about the company's LED bulbs, including that they would last 22+ or 45+ years, that customers would save hundreds of dollars over the lifetime of the bulbs, and that the company offered a "100% Satisfaction Guarantee."  The plaintiff alleged that, notwithstanding these promises, the bulbs burned out within six months.  Here are a few of the key issues that the court considered on Cree's motion to dismiss.

The court first considered whether the plaintiff's claims were preempted by the Energy Policy and Conservation Act, which requires light bulb manufacturers to make certain statements on their packaging regarding energy use, efficiency, and estimated annual operating costs, and which also specifically preempts any state law claims regarding such statements.  The court held that Cree's statements about the minimum estimated lifespan of its bulbs were preempted, but that statements not required by EPCA, such as estimated cost savings and the satisfaction guarantee, were not.

Cree also argued that the plaintiff's claims should be dismissed because its allegedly misleading statements were immaterial and therefore were not actionable.  Under New York law, only those acts or practices that are "likely to mislead a reasonable consumer acting reasonably under the circumstances" are actionable.  As the court explained, a material claim is "one that involves information that is important to consumers and, hence, likely to affect their choice of, or conducting regarding, a product."  Since the plaintiff had alleged that she had relied on the company's statements when deciding whether to buy Cree's light bulbs, the court didn't buy this argument (at least at the motion to dismiss stage).

In addition, Cree argued that any allegedly misleading statements were non-actionable puffery.  Puffery is an "exaggeration or overstatement expressed in broad, vague, and commendatory language."  In other words, it's a subjective statement about a product that can't be proven true or false -- and that a consumer wouldn't rely on when making a purchasing decision.  Here, the court held that Cree's statements about cost savings and the company's 10-year warranty were not puffery, but that the satisfaction guarantee was.  The court wrote that the satisfaction guarantee was "merely a commendation of the goods, and therefore non-actionable puffery."

Although the court doesn't get into this issue in detail, it's important to understand this puffery ruling as one that is limited to the question of whether the manufacturer is promising that consumers will be "satisfied."  Although the court holds that the "satisfaction guarantee" claim is puffery, the court is not saying that the marketer gets a free pass on the guarantee itself.  In other words, while the marketer may not need to substantiate that all of its customers will be satisfied, if they are not, in fact, satisfied, they're still likely entitled to their money back.

"exaggeration or overstatement expressed in broad, vague, and commendatory language" 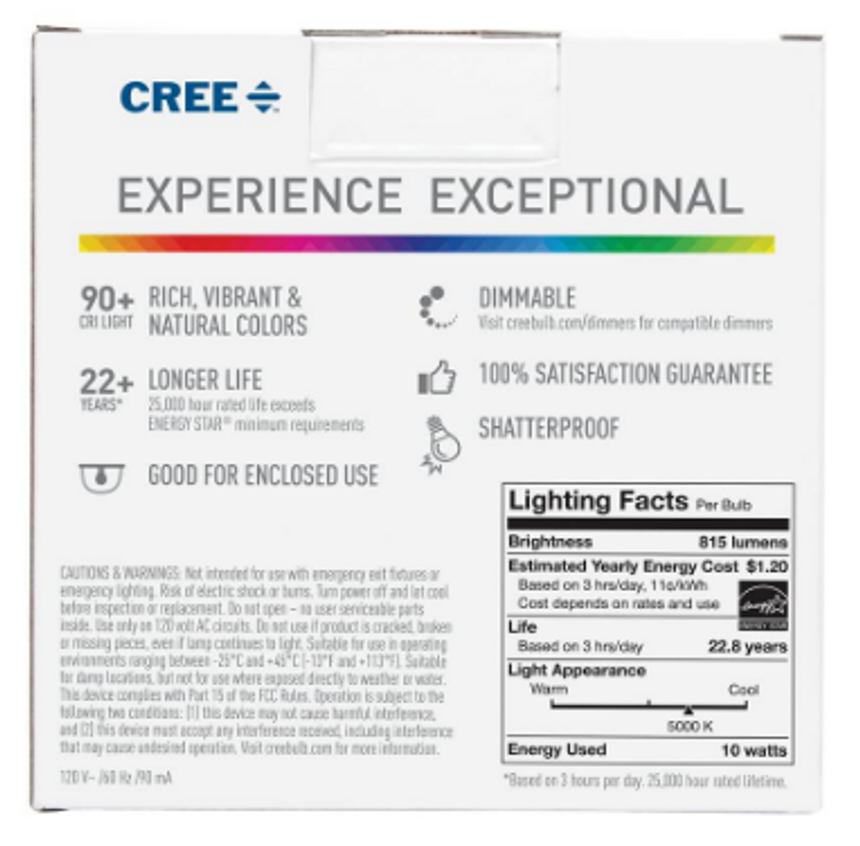