The Federal Trade Commission announced that it entered into a settlement with the marketer of a dietary supplement called Synovia, resolving allegations that the company falsely advertised that the product treated arthritis and helped to alleviate joint pain.  The settlement, with A.S. Research ("ASR") and its owners, requires them to pay more than $800,000 in damages.

Andrew Smith, the Director of the FTC's Bureau of Consumer Protection, said, "This company claimed to sell a miracle supplement that cured joint pain and arthritis, but they lied to consumers about the product’s results and also used fake testimonials and fake doctor endorsements."

The FTC alleged that through newspaper, direct mail, and online advertising, ASR made false and unsubstantiated claims about the effectiveness of Synovia, including that the product provides "dramatic relief from swelling, pain and stiffness" and "restores and rebuilds your joints at the molecular level to wipe out pain."

The FTC also charged the marketer will using false and misleading consumer testimonials to promote Synovia.  The FTC said that some testimonials were obtained by giving consumers free product in exchange for "especially positive and inspiring" reviews" of Synovia.  Those testimonials were false and misleading, the FTC said, because not only did the marketer fail to disclose that they were paid for their endorsements, but they had actually used a prior version of the product with different ingredients.  The FTC said that ASR also misled consumers by having one of its owners endorse the product in its advertising without disclosing his connection to the company.  The FTC also alleged that ASR used consumer testimonials that were completely fabricated, including, for example, by inventing an "Iowa man, Harold Jenkins" who "no longer needs his walker at age 74."

The FTC said that ASR also used false and misleading expert endorsements from medical doctors who did not have expertise in joint pain relief and who did not review or examine the advertised formulation of Synovia.

The FTC also alleged that ASR used telemarketing scripts that were false and misleading as well.  The FTC said that, no matter what medical complaint consumers called about, ASR's telemarketers would respond, "We’ve been getting amazing feedback from people with similar issues which tells me Synovia is going to be a great fit for you!"

The FTC said that ASR also used deceptive pricing tactics to get consumers to pay extra for the product.  The FTC alleged that the company upsold consumers to Synovia "Plus" for an additional $9.95 per bottle, even though both versions of the product contain the same ingredients.

While at first glance, this is just a case about yet another marketer being charged with making false health claims about a dietary supplement, there's actually some important guidance here for marketers generally:

As for "Harold Jenkins," well, I guess he's still using that walker.  Unless he never used one to begin with . . . .

“If you lie about the effectiveness of your product, the FTC will hold you accountable" -- Andrew Smith, Director, FTC Bureau of Consumer Protection 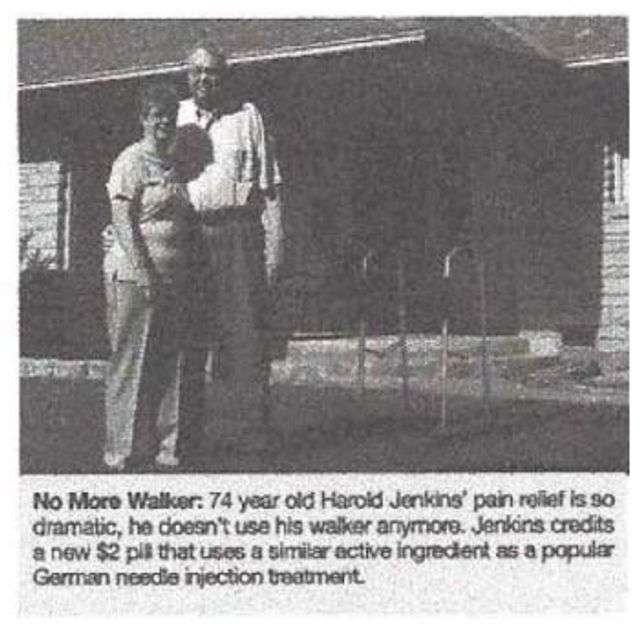