You want to advertise that you've got the better product.  Is there a problem with taking a photo of a damaged version of a competitor's product, digitally altering the photo to make the problem look worse, and then including the photo in an advertisement as proof that your product is better?  That was the question in a recent lawsuit between two competitors in the building siding industry, Louisiana-Pacific and James Hardie Building Products.  The answer may surprise you.

Louisiana-Pacific sells engineered-wood siding and Hardie sells fiber-cement siding.  To prove the superiority of its fiber-cement product, Hardie ran a "No Wood Is Good" advertising campaign, which claimed that all wood siding is vulnerable to damage by pests.  The advertising featured a photo that a Hardie employee had taken of a hole that he had found in home that was fitted with Louisiana-Pacific wood siding.  Apparently believing that the hole itself wasn't compelling enough, Hardie's advertising agency sharpened the colors in the image, darkened the interior of the hole to make it appear deeper, and then superimposed a woodpecker into the hole.

Louisiana-Pacific sued Hardie, and moved for a preliminary injunction, alleging that the advertising violated the Lanham Act as well as Tennessee prohibitions on false advertising.  To prove false advertising under the Lanham Act, a plaintiff must first establish that the defendant made a "false or misleading representation of fact" about a product.  Louisiana-Pacific alleged that Hardie's digital alterations to the photograph make the photograph literally false.  The lower court denied Louisiana-Pacific's motion for a preliminary injunction, finding that there was no likelihood of success on the merits, however.  Earlier this summer, the 6th Circuit affirmed.  So, why did the court hold that there was no problem using digitally altered photos of a competitor's product in advertising?

Second, the court felt that the advertisement fairly represented engineered wood's susceptibility to woodpecker damage.  The court credited Hardie's expert evidence that the photo conveyed an accurate message -- that a woodpecker probably created the hole and that woodpeckers often damage wood-based siding.  The court wrote, "Thus, though its digital enhancements might, colloquially speaking, render the image 'false," they are not the sort of literal falsity the Lanham Act targets."

Louisiana-Pacific also argued that Hardie's advertising claim that "Pests Love It" is also false.  The court rejected this argument as well, finding that the statement was simply puffery.  The court wrote, "No reasonable consumer would believe that Hardie knows -- or could discover -- whether pests 'love' engineered-wood siding."  The court didn't believe that consumers would think that "Pests Love It" conveys a quantifiable, objective fact about pest preference.

Is the 6th Circuit forging a new path in advertising law, disregarding well-established principles that product demonstrations should be real, and that any mock-ups or special effects should be disclosed?  While this case could have gone another way, I don't think the court is breaking ground here.  All the court really held was that reasonable consumers won't think that the woodpecker image is a real demonstration, but is simply an illustration of what could happen if you choose wood siding for your home.

When faced with this type of issue more fifty years ago in the Supreme Court's Colgate-Palmolive case, Chief Justice Warren said that the critical question was whether the advertiser made a "misrepresentation that viewers have objective proof of a seller's product claim over and above the seller's word."  Looking at the issue here through Chief Justice Warren's eyes, it seems that the court just found that because the image was not "visual proof" of a claim, without more, the fact that the image was digitally altered was not misleading.

"The Lanham Act doesn't require advertisers to lie in wait, cameras in hand, for an actual woodpecker to drum away at a house's siding" 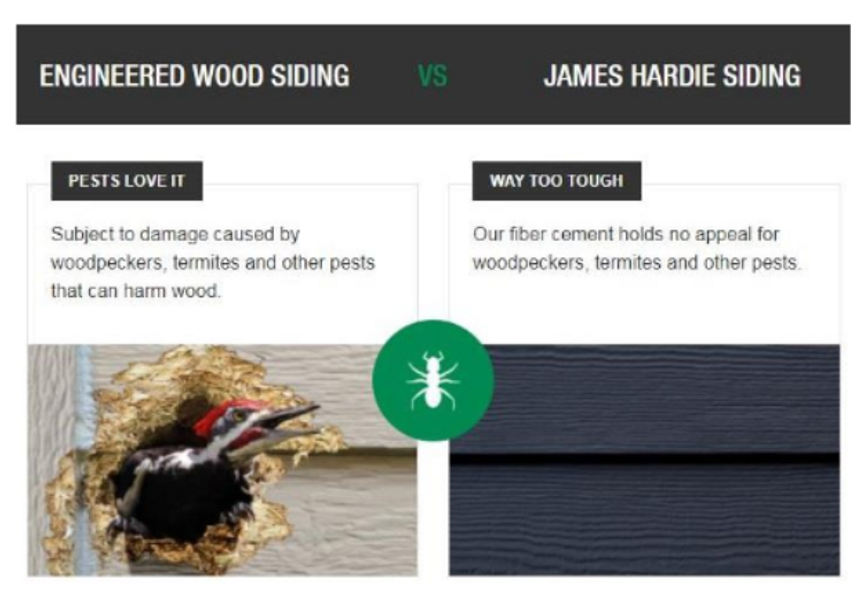