On July 24, 2019, the FTC announced a $5 billion settlement with Facebook to address Facebook’s alleged violations of the FTC Act and its 2012 consent order with the FTC. The settlement comes as no surprise to the privacy community – Facebook has been closely scrutinized by the public and regulators since the Cambridge Analytica data incident in March 2018 and indicated to investors earlier this year that it anticipated a fine from the FTC between $3 and $5 billion.

We have read the complaint, settlement, and press releases issued by the FTC and Facebook, and provide our thoughts below on what it means for business:

The settlement is attracting significant press, in part, because of the size of the fine. Facebook must pay $5 billion, which is the largest penalty ever by a U.S. regulator for privacy violations. According to the FTC, the fine constitutes nearly 9% of Facebook’s annual revenue from 2018. That fine is more than two times the maximum fine set out by the GDPR (4% of annual revenue) and nearly 20 times the size of the Equifax settlement of $275 million. While the fine is seemingly quite large, many in the privacy community view the fine as insufficient. FTC Commissioner Rohit Chopra issued a dissenting statement that the settlement does little to address Facebook’s unjust gains from its data practices. Providing further support to this perspective, Facebook posted strong quarterly earnings the same day the FTC announced the settlement. While we can debate the sufficiency of the fine, it is clear that privacy compliance is a paramount concern for regulators and the public in 2019. Failure to incorporate privacy by design has real monetary consequences for business, which will amplify once the California Consumer Privacy Act (“CCPA”) takes effect in January 2020.

According to the complaint, Facebook required third parties (including developers) to agree to its terms, but failed to conduct due diligence on third parties’ practices. Where Facebook discovered a violation, Facebook allegedly did not enforce its terms or consider the amount of money generated by the third party as part of determining whether to enforce its terms. The settlement requires Facebook to take responsibility for the actions of third parties on its platform. Facebook must require third parties to disclose their data practices and self-certify to their compliance with Facebook’s terms; deny or terminate access to third parties that fail to certify to the terms; monitor third party compliance with the terms (including through review and audits at least once every 12 months); and take enforcement action with respect to violations of the terms. These obligations are notable because they directly impact advertisers and publishers that use Facebook’s platform. Although Facebook rolled out new terms last year for Custom Audiences and other services, companies should expect further tightening of the terms and auditing oversight, which may limit certain data practices on the platform. The flow down obligations increase the need for companies to conduct their own due diligence around the data they provide to the Facebook platform and service providers and vendors to whom they provide data from the Facebook platform.

The complaint alleges that Facebook informed users that they could exercise choice over their privacy by making their comments public or private, but did not inform users that such settings did not affect Facebook’s sharing of data with third parties. The complaint further alleges that while Facebook did offer controls for users to limit their sharing of data with third parties, such settings were not readily apparent to users and often hidden in menus without sufficient disclosure. According to the FTC, while Facebook at one point disclosed the settings through a disclaimer at the top of its desktop settings page, Facebook removed such disclaimer after four months. The takeaway for business is that disclosure and choice need to be clear, conspicuous, and accurate. While marketing and sales teams may want to limit or hide disclosures and choice to create a more frictionless experience, regulators could deem such practices as unfair or deceptive.

For our full analysis on what the settlement means for business, please visit our privacy blog Focus on the Data here. 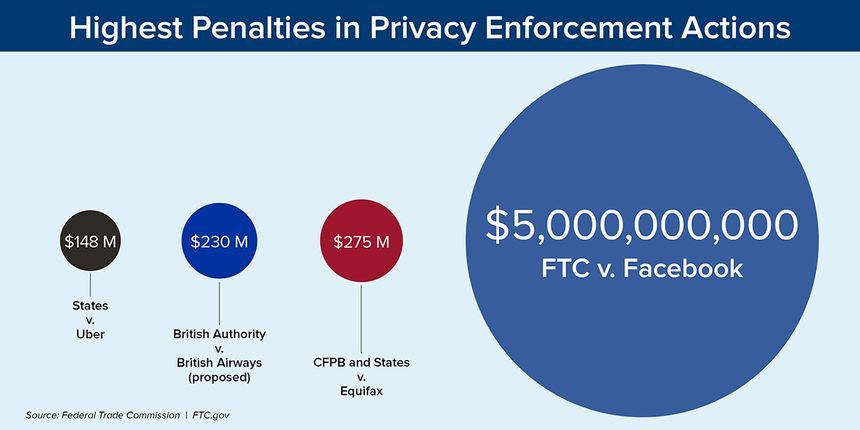