Earlier this month, the Federal Trade Commission announced that it had reached a settlement with Gerber Products in a long-running litigation involving allegations that Gerber deceptively advertised that feeding its Good Start Gentle formula to infants with a family history of allergies prevents or reduces the risk that they will develop allergies.

In October 2014, the FTC sued Gerber, alleging that the company misled consumers about whether feeding infants Good Start Gentle formula prevents them from developing allergies and about whether the product's claims were approved by the Food and Drug Administration.  The FTC said that Gerber made allergy-prevention claims such as, “You want your baby to have your imagination . . . Your smile . . . Your eyes . . . Not your allergies," and “1st & ONLY Routine Formula TO REDUCE THE RISK OF DEVELOPING ALLERGIES."  In addition, through the use of a gold badge that said, "1st and only" and "meets FDA qualified health claim," the FTC alleged that Gerber misrepresented that is claims were FDA-approved.

The FTC did acknowledge, however, that several years before, Gerber received permission from the FDA for permission to make a claim connecting some of the ingredients in the formula with the reduced risk of one type of allergy -- atopic dermatitis -- in infants, so long as Gerber carefully qualified its statement to make it clear that there is “little scientific evidence” for the relationship.

Now, fast-forwarding to July 2019, the FTC settled with Gerber.  In the settlement, Gerber agreed:

All-in-all, it's a pretty quiet end to a very long-running dispute, with an consent order that's pretty typical in these kinds of cases.

What is the important take-away here?  This case is a great example of the importance of ensuring that there is a close fit between the substantiation you have and the claims that you are actually making.  The FTC didn't dispute that the FDA has approved Gerber's making of a limiting allergy-prevention claim.  The thing that gave the FTC hives, however, was the fact that it believed that the advertising communicated claims that were far broader than what the substantiation could support.

“Parents trusted Gerber to tell the truth about the health benefits of its formula, and the company’s ads failed to live up to that trust. Gerber didn't have evidence to back up its claim that Good Start Gentle formula reduces the risk of babies developing their parents' allergies” -- Jessica Rich, former Director of the FTC’s Bureau of Consumer Protection (2014) 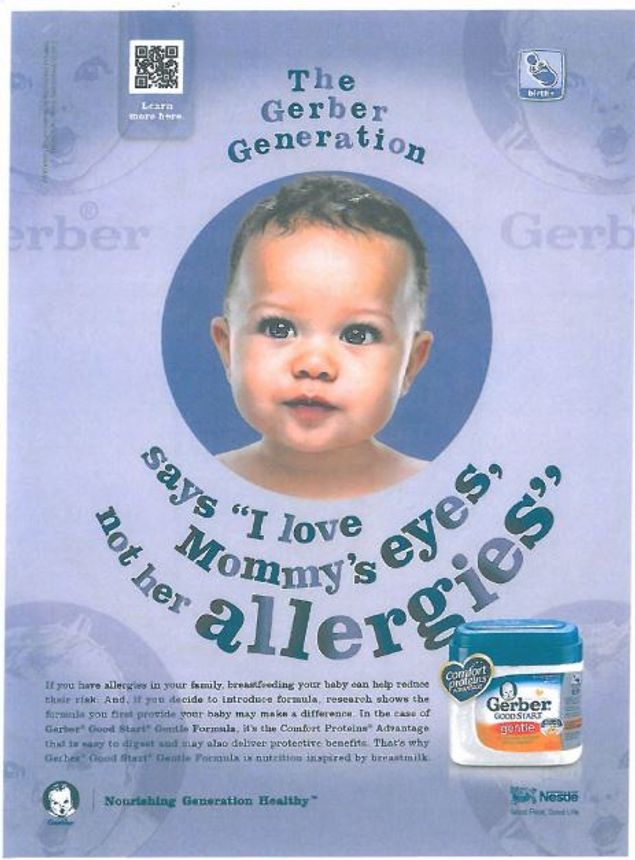