If you're promoting your airline on social media, what do you think are some of the most effective marketing techniques?  How about, "we've got less legroom" or "we'll probably lose your bags"?  Or how about, "if we crash the plane, you're least likely to die if you sit in the back of the plane"?

Social media quickly responded with horror and surprise, and the airline soon apologized for the Tweet.  KLM India wrote, "We would like to sincerely apologise for a recent update.  The post was based on a publically available aviation fact, and it isn't a @KLM opinion.  It was never our intention to hurt anyone's sentiments.  The post has since been deleted."

These kinds of social media missteps don't just fly by, however.  Not only do they attract great (negative) attention on social media, but they make national news.  For example, this Tweet was reported on by The Washington Post, National Public Radio, and many other media outlets in  the United States and around the world.  And it wasn't the only time that KLM attracted negative attention for its social media in the last week.  KLM also received widespread criticism, and media attention, for its Tweet telling passengers that they may be required to cover up when breastfeeding if other passengers complain.

What are some lessons to be learned from KLM India's latest social media snafus?  Here are a few thoughts.

If you take these steps, you should be able to sit back, relax, and enjoy the rest of your day.

"Seats at the back of the plane are the safest!" 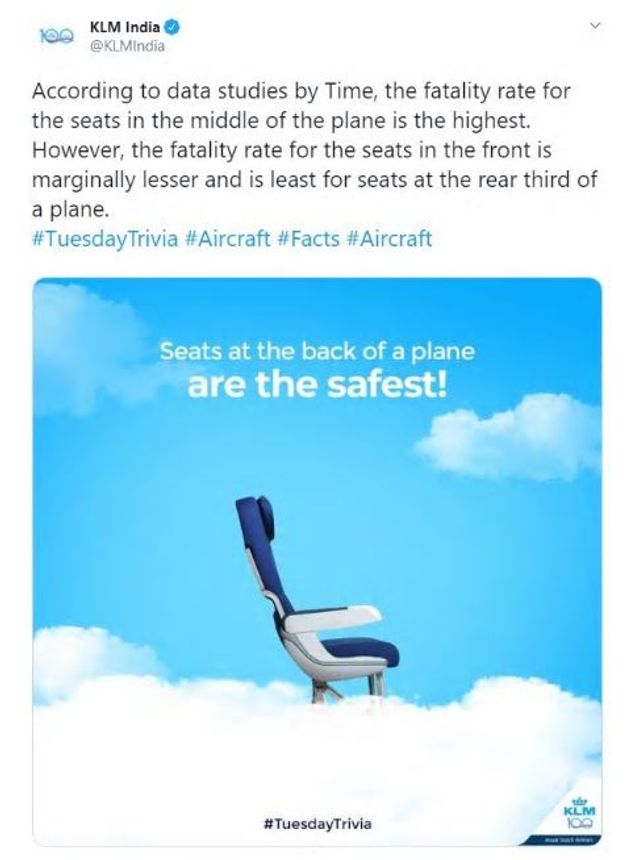