Plaintiff Klauber Brothers has been making lace for more than 150 years. Defendant Badgley Mischka produces (among other things) bridal dresses and, one can assume, is always itching for interesting and intricate lace designs.

Last year, Klauber sued Badgley (and retailer Saks Fifth Avenue) in the SDNY, alleging that a Badgley garment (below on the right) incorporated fabric that infringed upon one of Klauber's designs (below on the left): 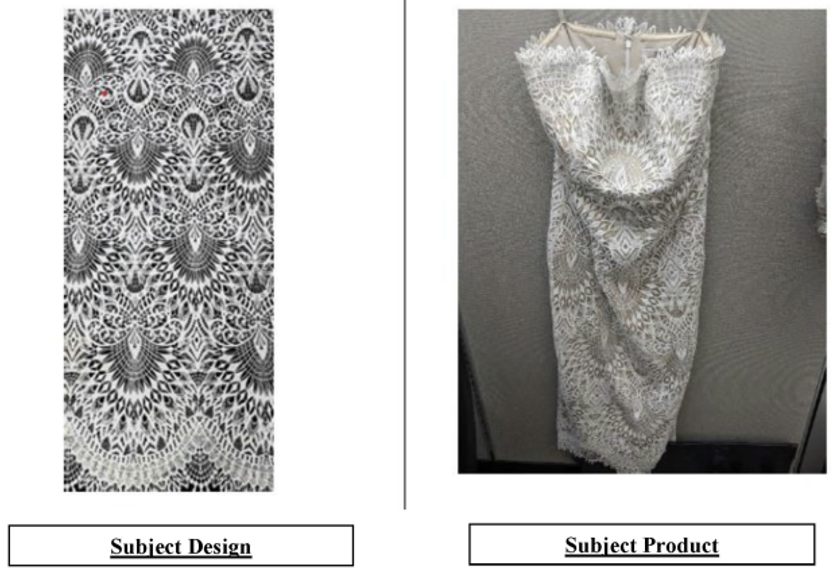 The defendants moved to dismiss the complaint on the grounds that Klauber had failed to properly plead facts to support that the defendants had access to (and therefore copied) Klauber's design. The court agreed with the defendants and dismissed the case.

To prove copyright infringement, a plaintiff must demonstrate (1) ownership of a valid copyright in the work and (2) copying, by the defendants, of protected aspects of the plaintiff’s work. The second prong, in turn, requires the plaintiff to show both that (a) the defendants actually copied the work, and (b) the defendants’ copying constituted "unlawful appropriation" (or, to use Nimmer’s term, "actionable copying"). It is rare that a plaintiff will have direct evidence of actual copying. Instead, typically, actual copying is proven by circumstantial evidence that (i) the defendant had access to the plaintiff’s work, and (ii) the two works share similarities probative of copying rather than coincidence, independent creation, or prior common source. (Nimmer calls this "probative similarity.")

Klauber argued that the defendants' access could be presumed because its lace design was widely distributed. Widespread dissemination of a copyrighted work - for example, of a song that becomes an ear worm because it is in heavy rotation on radio stations - can give rise to an inference of access. However, Klauber's complaint specified only that it had distributed a specific quantity (23,881 yards) of lace in a general location (New York City) during a general time period (“beginning in 2016”). The court found that these facts, standing alone, were not sufficient to support that the distribution was sufficiently widespread to give rise to an inference of access.

Moreover, Klauber had failed to plead facts that showed a "plausible" link between the distribution of its lace and the defendants. In the complaint, Klauber alleged, upon information and belief, that the defendants had accessed Klauber's lace designs "including without limitation" via:

"(a) access to Plaintiff’s showroom and/or design library; (b) access to illegally distributed copies of the Subject Design by third-party vendors and/or Doe Defendants, including without limitation international and/or overseas converters and printing mills; (c) access to Plaintiff’s strike-offs and samples; and (d) garments manufactured and sold to the public bearing fabric lawfully printed with the Subject Design by Plaintiff for its customers."

The court held that these assertions were not supported by specific factual allegations and amounted to “nothing more than a generic list of means by which any infringer might gain access to any fabric design." It's worth noting that the court was not writing on a clean slate: over the years, Klauber has brought numerous infringement cases in the SDNY. On at least three other occasions, courts have dismissed Klauber's cases based on the insufficiency of the complaint's bare-bones allegations of how the defendants had accessed its designs - allegations that were "identical or nearly identical" to those made by Klauber here. Klauber failed to persuade the court that a different result was in warranted here.

Next, Klauber argued, in the alternative, that Badgley's fabric was "strikingly similar" to its copyrighted lace design. When two works are "strikingly similar" - i.e., when they contain the type of verbatim, literal similarity that is so extensive that any explanation other than copying defies reason - a court can presume that the defendant had access to and copied the original work. See Three Boys Music Corp. v. Bolton, 212 F.3d 477, 485 (9th Cir. 2000) (“In the absence of any proof of access, a copyright plaintiff can still make out a case of infringement by showing that the songs were ‘strikingly similar.'")

In support, Klauber noted the both designs use the “same diamond inside diamonds with similar fillings," the “same overall geometric patterns in similar arrangement” and the “same arrangement of curlicues.” Klauber submitted these illustrations to support its argument: 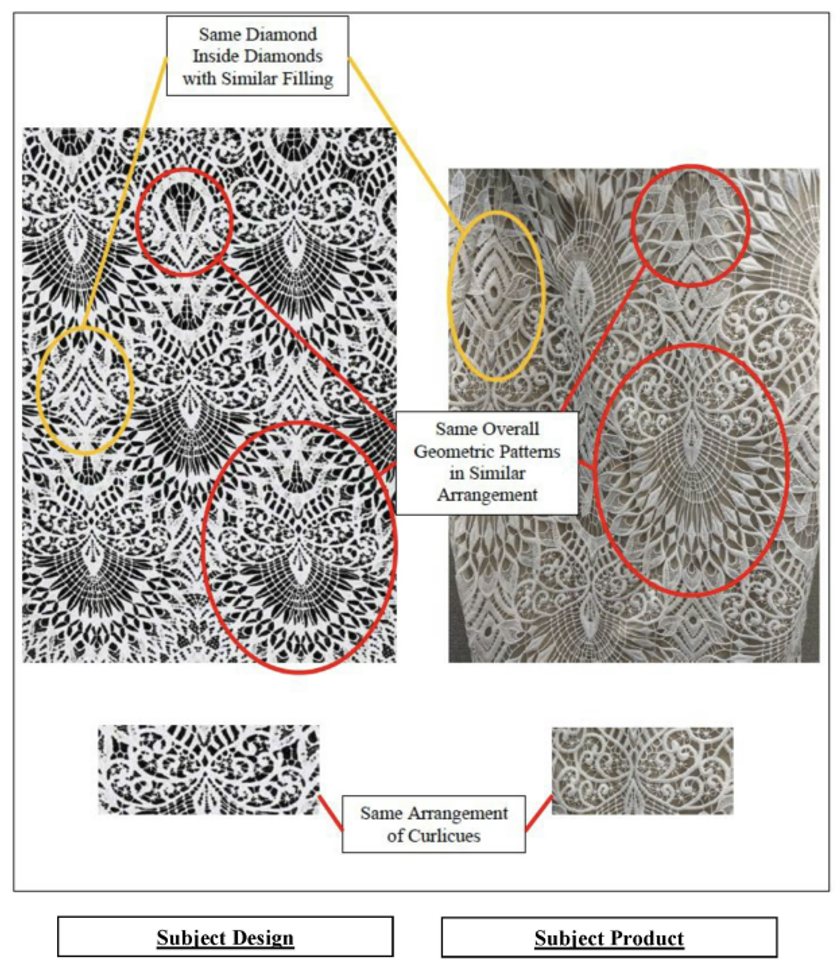 In response, the defendants list numerous differences between the designs, including: (1) the diamond patterns in Badgley's design (unlike in the plaintiff's) are convex (curved outward), contain two leaves, and includes scrolling pattern running through the middle of it, (2) the elements within each design's "geometric arrangement" are arranged differently, with certain elements spaced differently, curved differently, or intertwined with different shapes or patterns, (3) the curlicues in each design contain a different number of “scrolls," and (4) there are differences in the spacing and appearance of the fan motifs, diamond motifs, and petal patterns in the designs (5) the designs have different color schemes, and more.

After performing a side-by-side comparison, the court concluded that the plaintiff could not satisfy the "heightened standard of striking similarity" because "the works reflect several significant differences with respect to elements, arrangement, and overall layout."

The court, however, granted Klauber leave to file (another) amended complaint. So this may not be the end of the matter. 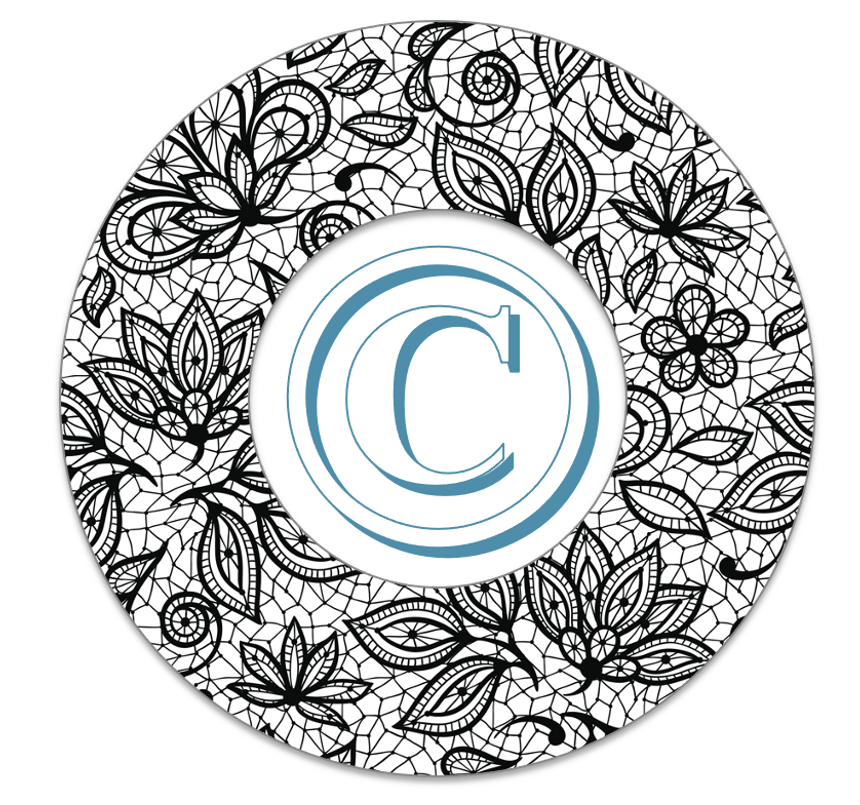