Last winter, I blogged about the lawsuit filed by sculptor and prop designer Michael Hayden against Jeff Koons, in which Hayden alleges copyright infringement based on Koons' inclusion of one of Hayden's sculptures in a series of works Koons created in 1989-1990.

The Works at Issue

In the 1980s, Hayden designed sets and props for films featuring Italian adult film star (and future member of the Italian Parliament) Ilona Staller, better known as “Cicciolina.” Knowing that Staller was (as he puts it) "fond of snakes," Hayden created and then sold to Staller's company (as he describes it) "a large sculptural work depicting a giant serpent wrapped around a rock pedestal." Hayden alleges in his complaint that the "intended purpose of [his sculpture] was to serve as a work of fine art on which Cicciolina could perform sexually explicit scenes, both live and on camera." Here is a photo of the sculpture from the court's decision: 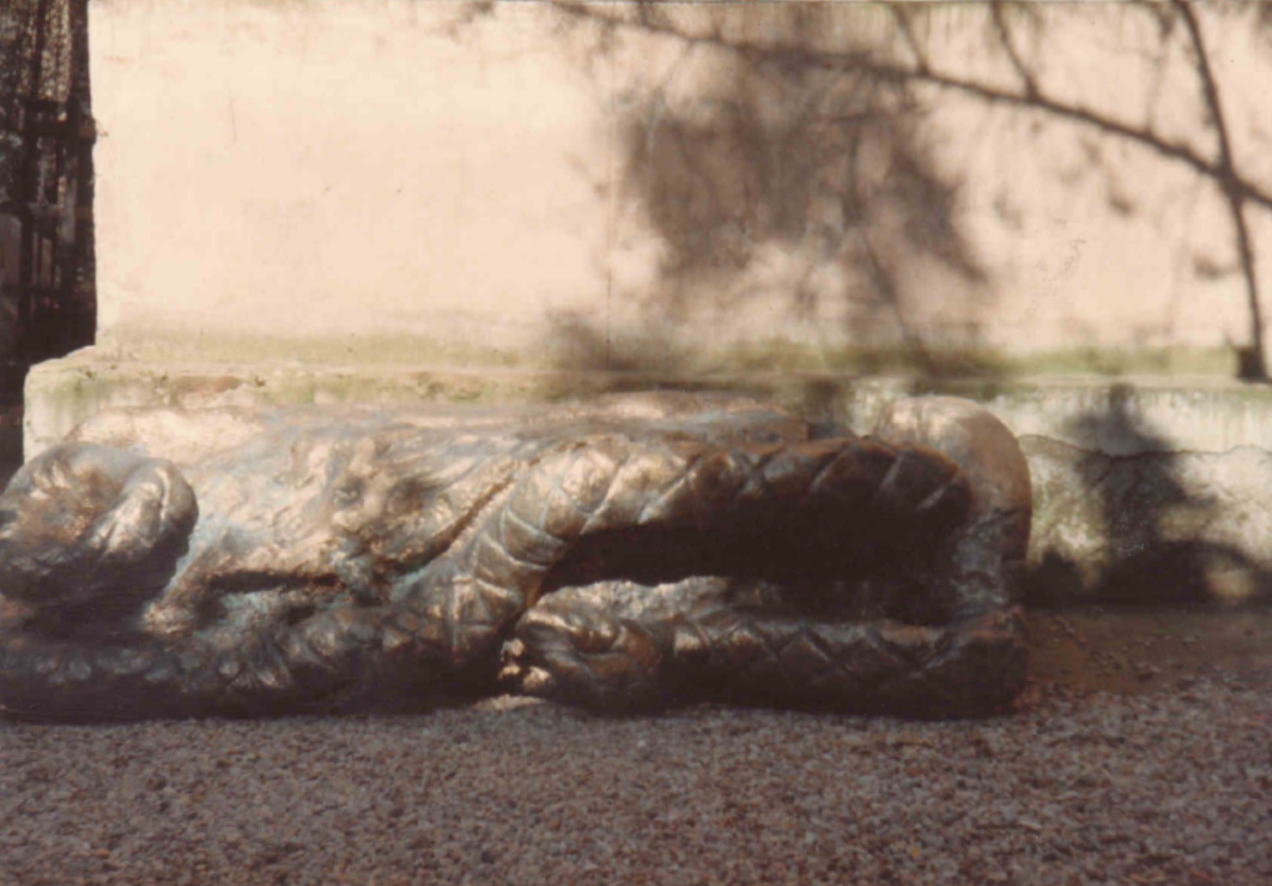 In 1989, Koons and Staller appeared together in a series of photographs that were shot in Staller's studio in Rome. In some of the photos, the couple appear to be partaking in some horizontal refreshment atop Hayden's sculpture. Koons used those photos to create a billboard, canvas and sculpture that were included in the series titled Made in Heaven. The three works at issue are:

Jeff and Ilona (Made in Heaven) (1990) (a polychromed wood sculpture): 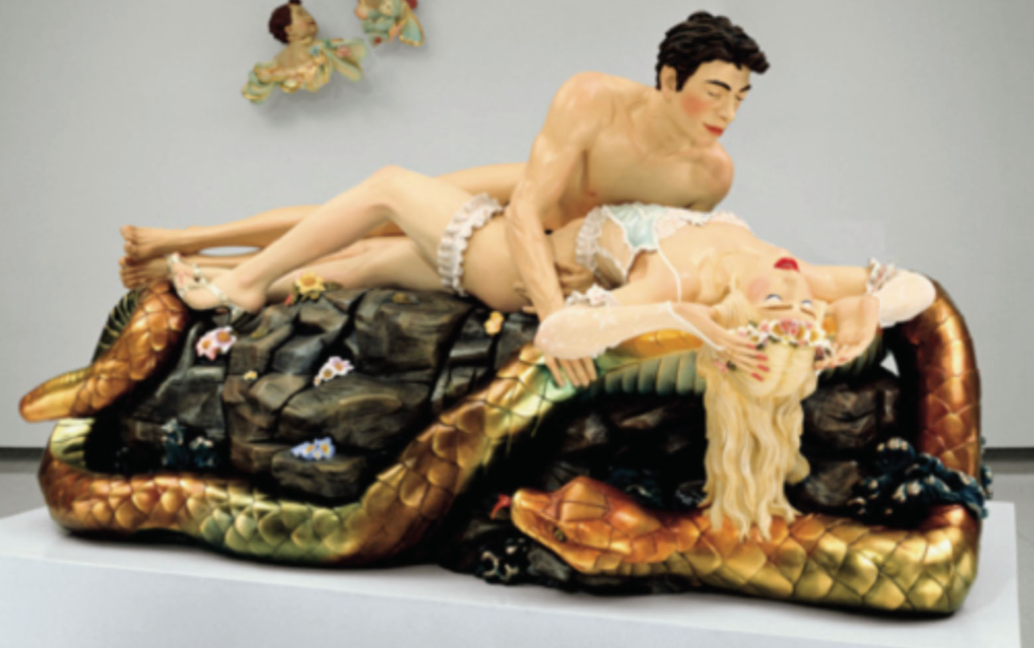 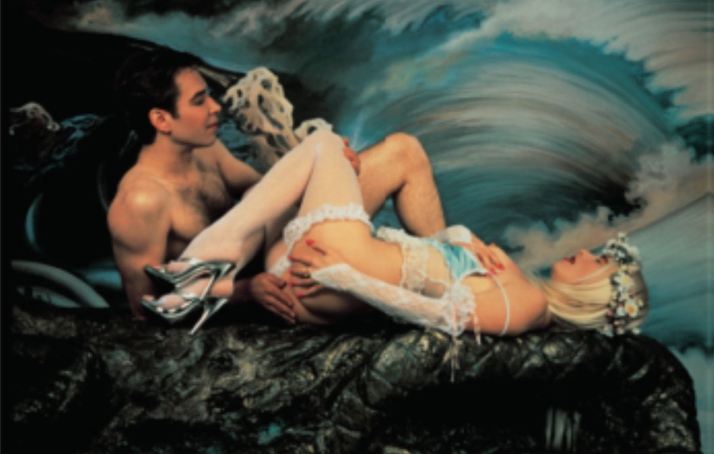 Hayden claims he was unaware of Koons's series until 2019, when he read an article about a lawsuit filed by Staller against Sotheby’s that included a photograph of one of the challenged works. After obtaining a copyright registration for his sculpture, under the title Il Serpente for Cicciolina, Hayden sued Koons, alleging, among other things, copyright infringement and violation of the right of attribution under the Visual Artists Right Act ("VARA").

Is the Plaintiff's Work a "Sculptural Work" or a "Useful Article"?

The court didn't buy Koons' argument that the case should be dismissed on the grounds that the sculpture was a "useful article" that had no claim to protection under copyright law. The Copyright Act defines “useful article" as "an article having an intrinsic utilitarian function that is not merely to portray the appearance of the article or to convey information." Citing the Compendium of U.S. Copyright Office Practices, the court observed that “a useful article must have "an intrinsic utilitarian function” that “is an indispensable characteristic of the article itself" and that is "objectively observable or perceivable from the appearance of the item and is an inherent part of its very nature." Noting that, “[n]ot all items that may be described as ‘useful’ are ‘useful articles’ under the Copyright Act," the court concluded:

Moreover, even if the snake sculpture could be categorized as a useful article, Judge Schofield found that its sculptural features would be eligible for copyright protection under a separability analysis because (1) they can be identified separately from, and (2) are capable of existing independently of, the utilitarian aspects of the article (see Star Athletica, L.L.C. v. Varsity Brands, Inc.):

"Here, the sculptural serpentine features are clearly discernible and can be identified separately from the rock base of the [plaintiff's work]. Given the intricate design, detail and craftmanship, the serpentine portion of the [plaintiff's work] could exist as its own sculptural work separate from the rock boulder or platform upon which it sits. Plaintiff’s subjective or stated intent that the [plaintiff's work] would be used as a platform for Cicciolina’s performances is not relevant to the separability analysis, as this inquiry is limited to how the article and feature are perceived, not how or why they were designed. Defendant’s focus on the physical intertwinement of the serpent and the rock discounts the fact that physical separability is not required for a finding of separability." (Citations omitted and cleaned up)

Koons also moved to dismiss the complaint on fair use grounds. The court denied the motion because "at least two of [the statutory] factors cannot be fully evaluated at the motion to dismiss stage."

The first factor - the purpose and character of the use - requires the court to examine, among other things, whether the plaintiff's work was published or unpublished. Hayden contends that his sculpture is unpublished (which cuts against a finding of fair use); Koons disputes this. The Copyright Act defines publication as:

"the distribution of copies or phonorecords of a work to the public by sale or other transfer of ownership, or by rental, lease, or lending. The offering to distribute copies or phonorecords to a group of persons for purposes of further distribution, public performance, or public display, constitutes publication. A public performance or display of a work does not of itself constitute publication."

While Hayden acknowledges that he agreed, in the 1980s, that Cicciolina could use the sculpture commercially in public performances, he denies that he ever “authorized the making or distribution of copies” or assigned authorship, copyright ownership, or sublicensing rights of the sculpture to Cicciolina (or her company). Moreover, Hayden contends that he may have retained his right to control the public display of the sculpture under Italian law. (The sculpture was created in Italy.) The court concluded that because "it is unclear the extent to which Plaintiff may have retained creative control over first publication, a full assessment of the 'nature of the copyrighted work' cannot be made based on the face of the Complaint."

The court also found that fourth statutory factor - the effect of the use upon the potential market for or value of the copyrighted work - could not be determined on a motion to dismiss. Among other things, it was unclear, based on the allegations on the complaint, whether the market for the sculpture and Koon's works “meaningfully overlap.” Moreover, Hayden was not required in the complaint to include factual allegations to anticipate (and refute) Koon's expected fair use argument. Thus, Hayden's failure, at this stage of the case, to have identified potential derivative markets that were harmed by Koon's alleged infringement was not dispositive. "The Complaint sufficiently alleges a market for Plaintiff’s work and is not required to plead more with the aim of negating the fair use defense."

Does Hayden Have a Viable VARA Claim?

Koons also moved to dismiss Hayden's claim that Koons violated the right of attribution under VARA. The court noted that, pursuant to § 106A(d)(2), VARA protects works that were created prior to the statute’s effective date so long as "title" has not passed as of the effective date. The issue of whether "title" had passed here was not clear. Does "title" mean transfer of ownership of the physical object (as Koons argued) or transfer of copyright ownership (as Hayden alleged), or something else? The court reserved judgment on this issue, pending further briefing at the summary judgment stage.

What About an Implied License?

The motion to dismiss did not address a potential implied license defense: since Hayden sold the sculpture to Staller for the express purpose of using it as a platform on which she would be photographed, he had granted to Staller an implied license to photograph the sculpture. (See this post and this post on recent cases where implied copyright licenses have been recognized by courts.) In his complaint, Hayden anticipates this argument and alleges that he "never granted Mr. Koons permission to use the Hayden Work in the Infringing Works, nor did any license Mr. Hayden may have implicitly granted to Cicciolina [or her company or manager] permit Mr. Koons to use, copy, make, or profit from copies of the Hayden Work." In the complaint, Hayden drops a footnote that hints that there could be a complicated choice of law lurking here: "to the extent that Italian Law applies to this transaction, it is possible that no rights to use, display, copy, or exploit the Hayden Work could have been transferred, explicitly or implicitly, to anyone absent a written instrument providing for such transfer, regardless of intent." We can expect that the implied license theory will get some play as this case proceeds. 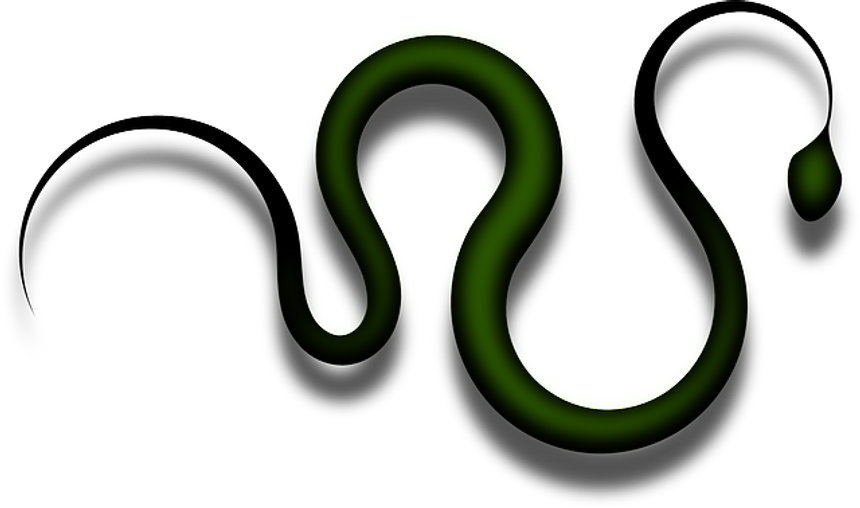