In 2019, the Federal Trade Commission sued Match Group, Inc., the owner of Match.com and other dating sites, alleging various claims, including that the company used fake love interest advertisements to trick consumers into purchasing paid subscriptions to Match.com.

According to the FTC's allegations, Match allowed users to create Match.com profiles free of charge, but prohibited the users from reviewing or responding to messages from potential love interests without upgrading to a paid subscription.  When someone expressed an interest in a non-subscriber, Match would send an automatically-generated e-mail to the non-subscriber letting the non-subscriber know about it.  The e-mail sent by Match included statements such as, "He just e-mailed you!  You caught his eye and now he's expressed interest in you . . . Could he be the one?"  The FTC alleged that these e-mail advertisements, which encouraged users to subscribe to Match.com, were false and misleading, however, because many of the contacts that generated these types of notifications came from accounts that Match had already flagged as likely to be fraudulent.  In other words, the FTC alleged that Match used communications from fraudulent accounts in order to induce non-subscribers to purchase a subscription, touting the communications as romantic interest from a legitimate user, which then exposed consumers to a risk of being defrauded.

Match moved to dismiss these and other claims asserted by the FTC.  In a decision recently issued by the United States District Court for the Northern District of Texas, the court granted Match's motion to dismiss these specific claims on the grounds that they were barred by Section 230 of the Communications Decency Act (but allowed other claims to proceed).

Section 230 of the Communications Decency Act provides certain immunity to publishers arising out of the materials they publish when:  (1) the defendant is "a provider or user of an interactive computer service"; (2) the plaintiff's claims treat the defendant as a "publisher" of the allegedly damaging information; and (3) that information was "provided by another content provider."

Match argued that, as the provider of an interactive computer service, it was immune from liability for false advertising claims arising out of its advertising promoting that someone had received interest from a user, since the FTC's claims are based solely on the content provided by the user.  That's because, "An interactive computer service provider has immunity under the CDA as long as it is not also the provider for the content in question."

So, was Match the provider of the problematic content, because it sent automatically generated e-mails promoting the fact that the non-subscriber had received a message on Match.com?  The Court held that it was not.  The court wrote, "No matter how artfully pled, it is clear from the Complaint that the underlying communication created by a third-party, a Match.com user, is truly 'the specific harmful material at issue,' not the automatically generated advertisement sent by Match." The court's view here is that it was the underlying communication that caused the e-mail advertisement to be deceptive, and Match had no involvement in the creation of that communication. The court further explained, "Website features such as recommendations and e-mail notifications are 'the type of content-neutral tools" that are used to facilitate the communication and content of others . . . and are not content in and of themselves."

This is an important decision for marketers -- and a big loss for the FTC. Not only does it confirm, yet again, that Section 230 can immunize marketers from FTC claims, it suggests that, in certain cases, some content created by the marketers themselves may be protected as well, when it is based on content provided by others.

"The automatically generated advertisements, as alleged by the FTC, are not content created by Match such that it is the information content provider" 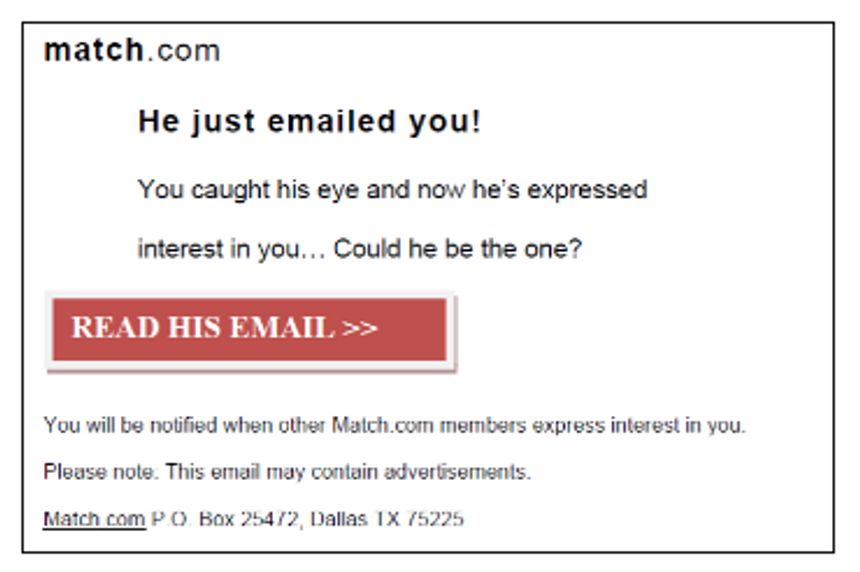