In response to Russia's invasion of Ukraine, Facebook, Twitter, and Google have made changes to their advertising policies.

Facebook announced that it is prohibiting Russian state media from running advertising on its platform worldwide.  Facebook said that it has started to roll out this change and that it will continue to implement it over the weekend.  Facebook also said that, "We are closely monitoring the situation in Ukraine and will keep sharing steps we’re taking to protect people on our platform."

Twitter also said that it is taking various measures in response to the Ukraine invasion.  Regarding its advertising policies, Twitter said that it is temporarily pausing all advertising in Ukraine and Russia "to ensure critical public safety information is elevated and ads don't detract from it."  In addition, Twitter said, "We’ll continue to take steps to safeguard people on the service and the communities they operate within, while enforcing the safety & integrity of the platform during this time."

According to media reports, Google is also taking steps to limit the ability of Russian state media to use its platforms.  Apparently, Google is also blocking Russian state media from running ads on its platforms and also suspending their ability to monetize its content.  Google said, "We're actively monitoring new developments and will take further steps if necessary." 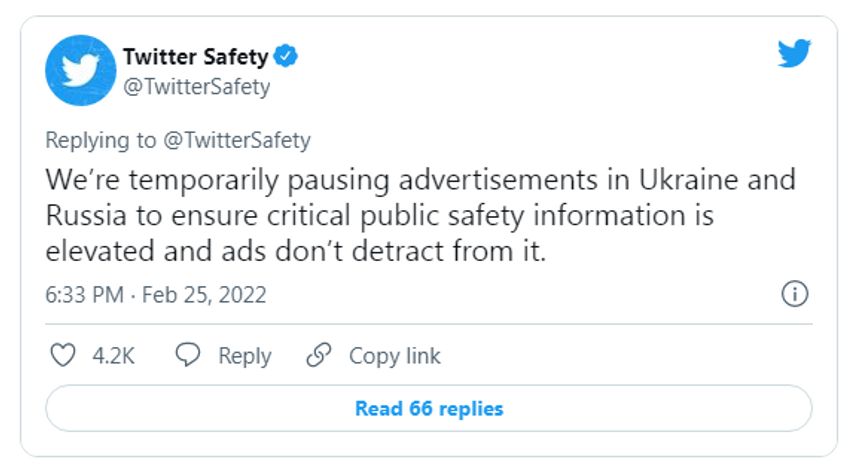