Massachusetts Attorney General Maura Healy announced that she reached a settlement with e-cigarette retailer Eonsmoke and its owners, resolving allegations that they marketed and sold nicotine vaping products to minors.  As part of the settlement, they agreed to pay more than $50 million and are prohibited from selling or marketing any tobacco product to consumers in Massachusetts.

In announcing the settlement, Healy said, "Eonsmoke coordinated a campaign that intentionally targeted young people and sold dangerous and addictive vaping products directly to minors through their website.  We were the first to take action against this company and its owners, and today we are holding them accountable and permanently stopping them from conducting these illegal practices in our state."

According to the amended complaint, Eonsmoke sold some of the sweetest flavors and highest nicotine concentrated e-liquids on the market, with names such as "sour gummy," "gummy bear," "donut cream," and "cereal loops."

The Massachusetts AG alleged that the company targeted kids in its marketing by referencing youth popular culture, including memes, profanity, and sexual imagery, and by advertising on social media platforms such as Instagram and YouTube.  The AG said, "Eonsmoke promotes its brand of vaping products as cool, sexy, a social necessity, sweet like candy, and better and cheaper than vaping products made by the brand JUUL."  The AG also said that the company targeted kids through the use of hashtags and celebrity influencers who are popular with youth.  The AG said, "This advertising plainly appeals to young people and contributes to youth use of vaping products."  For example, the AG cited an Instagram post that featured a Simpsons character (a child named Ralph Wiggum) and another Instagram post which reads, "Mom!  It's a USB drive!!"

The AG also alleged that the company's e-cigarettes were designed in a manner to target kids.  The AG pointed to devices that were shaped like USB drives -- that are "easily concealable and can be used covertly" -- which are customizable with "skins," colors, skins, and accessories.  In addition, the AG cited bracelet versions of the e-cigarettes that resembled fitness trackers, which "enable users to hide their device in plain view as a fashion or health accessory."  The AG also said that the devices can be used to perform vaping smoke tricks which had been popularized by Eonsmoke's advertising, influencers, and hashtags.

For any company that sells adult-oriented products, this lawsuit is a great lesson in the things to avoid doing -- and the factors you should consider -- if you don't want to be charged with marketing to kids.  The AG took a holistic approach here, looking at a many of the choices that the company made, including product design, advertising content, choices of celebrities and influencers, media channels used, and even the company's hashtags. 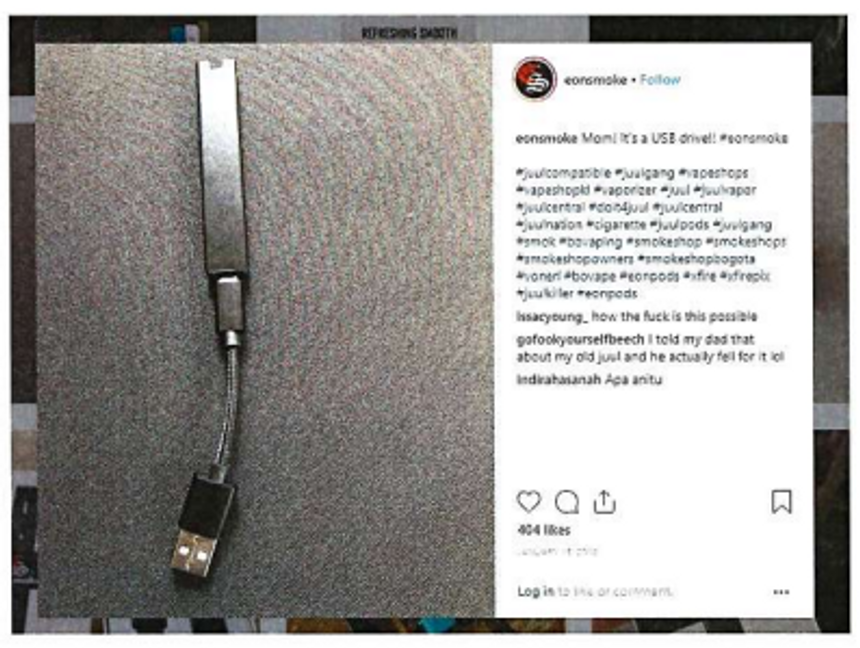