Earlier this month, Fox News refused to air a television commercial from the political action committee MeidasTouch, which criticizes the GOP's response to the attack on the Capitol, according to the organization and various media reports.

In the commercial, Capitol police offers talk about their experiences during the January 6th attack on Capitol, saying things like, "an attack on American democracy right here in the nation's capital," "they were all shouting at us calling us traitors," "it's been very difficult seeing elected officials and other individuals whitewash the events of that day or downplay what happened," and "it's sad to see us attacked by our fellow citizens."  The spot ends with the super, "THE GOP BETRAYED AMERICA."

On Twitter, MediasTouch said it tried to buy media time for the commercial, but that "Fox News just denied airing our ad."  The Los Angeles Times reported that one of the leaders of MeidasTouch, Ben Meiselas, said, "We couldn't have fathomed in our wildest imaginations that even a Fox News would reject an ad that simply condemns the insurrection, and condemns people who support the insurrection."

Television networks and other media have broad discretion to accept or reject advertising that runs on their platforms, and they reject ads for a wide variety of reasons.  It's also not uncommon to see an advertisement be rejected by one network, and get accepted by others.  For example, MSNBC decided to run the MeidasTouch commercial.

Some media organizations, as a matter of policy, don't accept issue adverting as all -- and some may step away from it temporarily.  For example, Facebook paused the acceptance of all political and issue advertising after the presidential election.  According to Fox's advertising guidelines, while Fox does accept issue advertising, it also "reserves its right to decline or restrict advertisements that do not meet its standards, are contrary to the expectations of its audience or disparage our company, people or partners, or members of our audience." 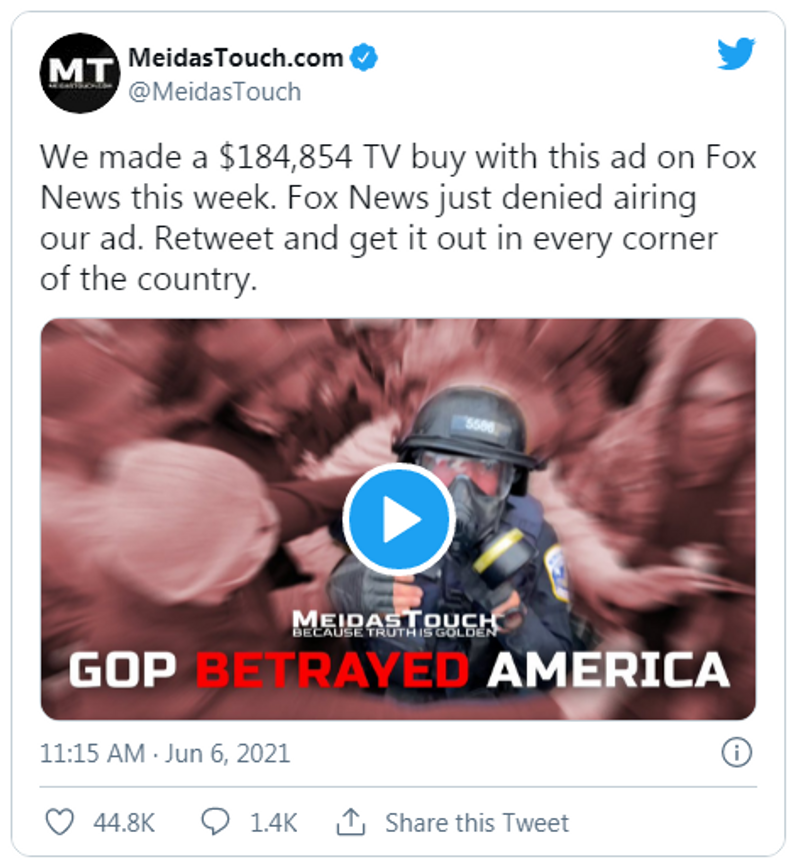