In May, the Federal Trade Commission closed two investigations related to marketers' "Made in USA" claims.  Here's a quick recap.

In a May 6th letter to Alpha Brewing Operations, the FTC expressed concerns that the company may have overstated the extent to which certain of its beer canning lines are made in the United States.  The FTC explained that, even if a product doesn't satisfy the FTC's "Made in USA" standard, a marketer may still make claims that a particular manufacturing process was performed in the United States or that a particular part was made here.

The FTC -- which hasn't frequently given guidance on how to use alternative terms (other than "assembled") -- indicated, for example, that "a marketer may be able to substantiate a non-deceptive claim that a foreign-origin product is 'Designed' in the United States."  The FTC cautioned, however, that, even when making a "designed in USA" claim, the marketer should not imply that the product is of U.S.-origin.

Ultimately, the FTC decided not to take action against Alpha Brewing, based on (among other things) the fact that the company removed all of its unqualified U.S.-origin claims from all of its marketing materials and notified its dealers and staff of the change.

The FTC told GhostBed that it is appropriate to promote the fact that it employs workers in the United States and offers a line of U.S.-origin mattresses and pillows.  The FTC cautioned, however, that GhostBed's marketing materials that promote imported products or products that have imported components must not overstate the extent to which its products are made in the United States and must include, were required by the Textile Act and Rules, appropriate country-of-origin disclosures.

In order to come into compliance with Section 5 of the FTC Act, as well as the Textile Act and Rules, GhostBed implemented a remedial action plan, which included:  (1) removing broad, unqualified U.S.-origin claims from advertisements, including Google and Facebook ads and social media posts; (2) implementing a quarterly employee training program; (3) enhancing review of U.S.-origin claims; (4) working with partner affiliates to update and correct claims; (5) discontinuing non-compliant partners; and (6) ensuring "mail order advertising" contains required origin information.  And, again, in light of the GhostBed's remedial efforts, the FTC decided not to take action against the company. 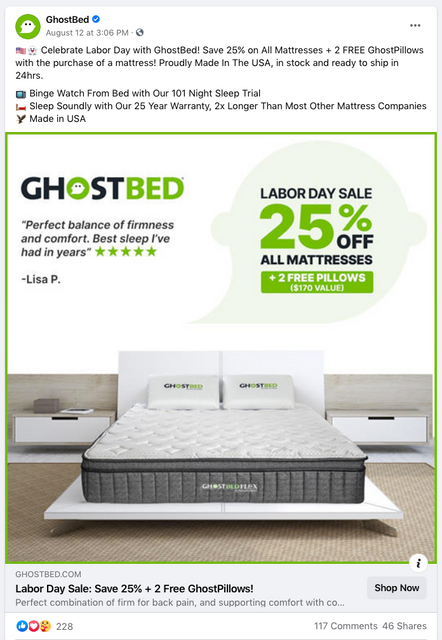 "All" Doesn't Mean "All," At Least According to New York's Highest Court
Jeff Greenbaum

Can a Brand Use Ice Cube's "Signature Catchphrase" in a Newsletter Without Permission?
Brian Murphy

Posting Pap's Pic on Instagram Not a Fair Use
Brian Murphy