The closing letters that the Federal Trade Commission posted in September both relate to referrals from the National Advertising Division.  Here's a quick recap.

The first matter involves a company called Matherson Organics d/b/a Vitamin Bounty and its Elderberry Immune Support product.  As part of its monitoring program, the NAD reached out to the advertiser to ask for substantiation for its claim in an Instagram post that, "As restrictions are gradually lifting, it’s more important than ever to keep your immune system strong. Our Elderberry Immune Support keeps you protected with vitamin C, zinc, elderberries, garlic and echinacea; a powerful immune-boosting combo."  The NAD expressed the concern that the advertiser's claim communicated that the dietary supplement protected individuals from COVID-19.

Because Vitamin Bounty didn't submit a substantive response to the NAD's inquiry despite "repeated outreach attempts," the NAD referred the advertiser to the FTC.  After the FTC then reached out to Vitamin Bounty, the advertiser agreed to participate in the NAD process.  In a letter to the NAD dated August 28, 2020, the FTC said that, as a result, no further action was warranted by the agency.

The second matter involves a competitive challenge at the NAD involving the makers of microfiber mop pads.  One of the issues in the case was a claim by Geerpres that its product was, in fact, "microfiber."  NAD determined that Geerpres failed to substantiate that the product was "microfiber" and told the advertiser to stop making the claim.  When the advertiser refused to comply, the NAD referred the matter to the FTC.

In a letter to NAD dated September 21, 2020, the FTC said that it looked into the matter and, as a result of its inquiry, the advertiser modified its website to address concerns that the FTC had about representations that the advertiser made about third party testing.   The FTC also said that it did not plan to take further action.  In the letter, the FTC didn't address, however, the "microfiber" claims that were the subject of the NAD referral. 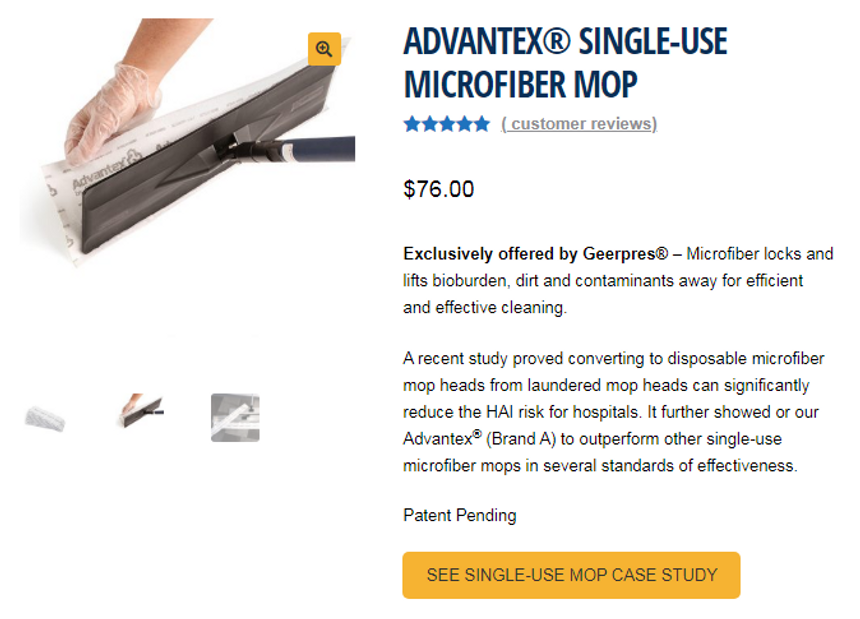