The Tennessean, which is the leading daily newspaper in Nashville, Tennessee, apologized for running what the paper's editor called a "horrific" and "utterly indefensible" advertisement.

The ad, from a group called "Ministry of Future for America," claimed that, "on July 18, 2020, Islam is going to detonate a nuclear device in Nashville, Tennessee."  The top of the ad features photos of President Trump, the Pope, and burning American flags.

In its coverage of the incident, The Tennessean reported that the ad, which came from a "fringe religious group," was accepted in violation of the newspaper's long-established standards.  The paper reported that its standards "clearly forbid hate speech."

Kevin Gentzel, President of Marketing Solutions and Chief Revenue Officer for Gannett, the newspaper's parent company, said, "We strongly condemn the message and apologize to our readers. We are immediately investigating to determine how this could have happened."  The newspaper said that it was donating the revenue that it received from the sales of the ad to the American Muslim Advisory Council.

"The ad is horrific and is utterly indefensible in all circumstances" -- Michael A. Anastasi, Vice President and Editor, The Tennessean 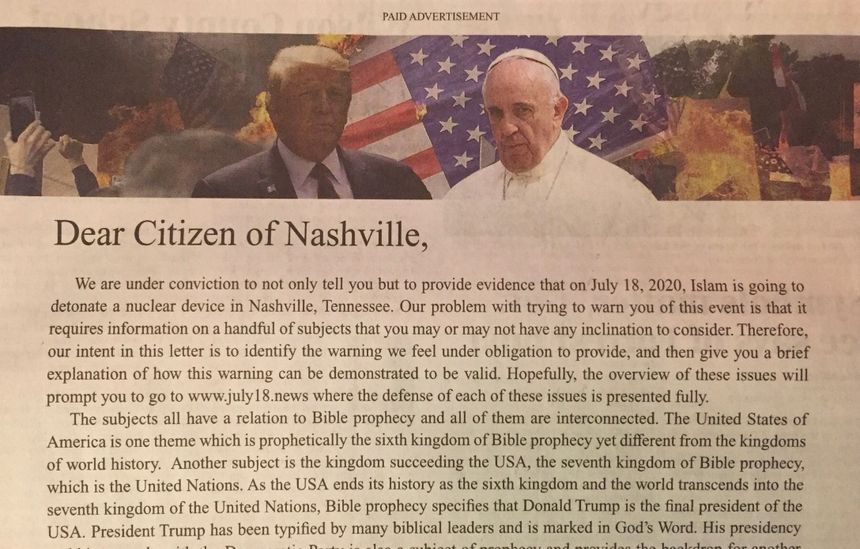