In March (see this post), the Ninth Circuit (sitting en banc) held that the Inverse Ratio Rule should no longer be employed in copyright infringement cases in that circuit because it was conceptually unsound, unworkable in practice, and unsuited to a digital world in which access to copyrighted works is practically universal. (Pursuant to this "Rule," the stronger the evidence that the defendant had access to the plaintiff's work, the less compelling need be the similarity between the plaintiff's and defendant's works in order to give rise to an inference of copying by the defendant.) That decision left the Sixth as the sole remaining circuit in which the Rule, potentially, still has sway. But now in Enchant Christmas Light Maze & Market Ltd. v. Glowco, LLC, a panel of the Sixth Circuit has questioned the viability of the Rule - albeit in a footnote - in a case involving three-dimensional animal sculptures fitted with blinking lights, much liked the herds of reindeer that frolic on the front lawns of suburban homes during the holiday season.

The plaintiff Enchant produces holiday light shows in various locations in the U.S. and Canada. Its shows feature light sculptures of animals - including a polar bear cub standing on its hind legs and a statuesque adult deer sitting with its four legs tucked under its body (all adorbs, of course) - and of the natural elements of a winter wonderland - including snowflakes, ice crystals and the like. Glowco and the other defendants approached Enchant to discuss the possibility of co-producing a show in Nashville. After negotiations broke down, the defendants decided to go it alone. When soliciting vendors in China to design and produce light sculptures for their Nashville show, the defendants shared drawings of Enchant's sculptures; however, the defendants denied that those drawings ultimately were used to manufacture its sculptures. Below is an image (from the complaint) that shows the design files used to build one of the plaintiff's polar bear cub sculptures and the design file used by the defendants to fabricate their allegedly infringing sculpture: 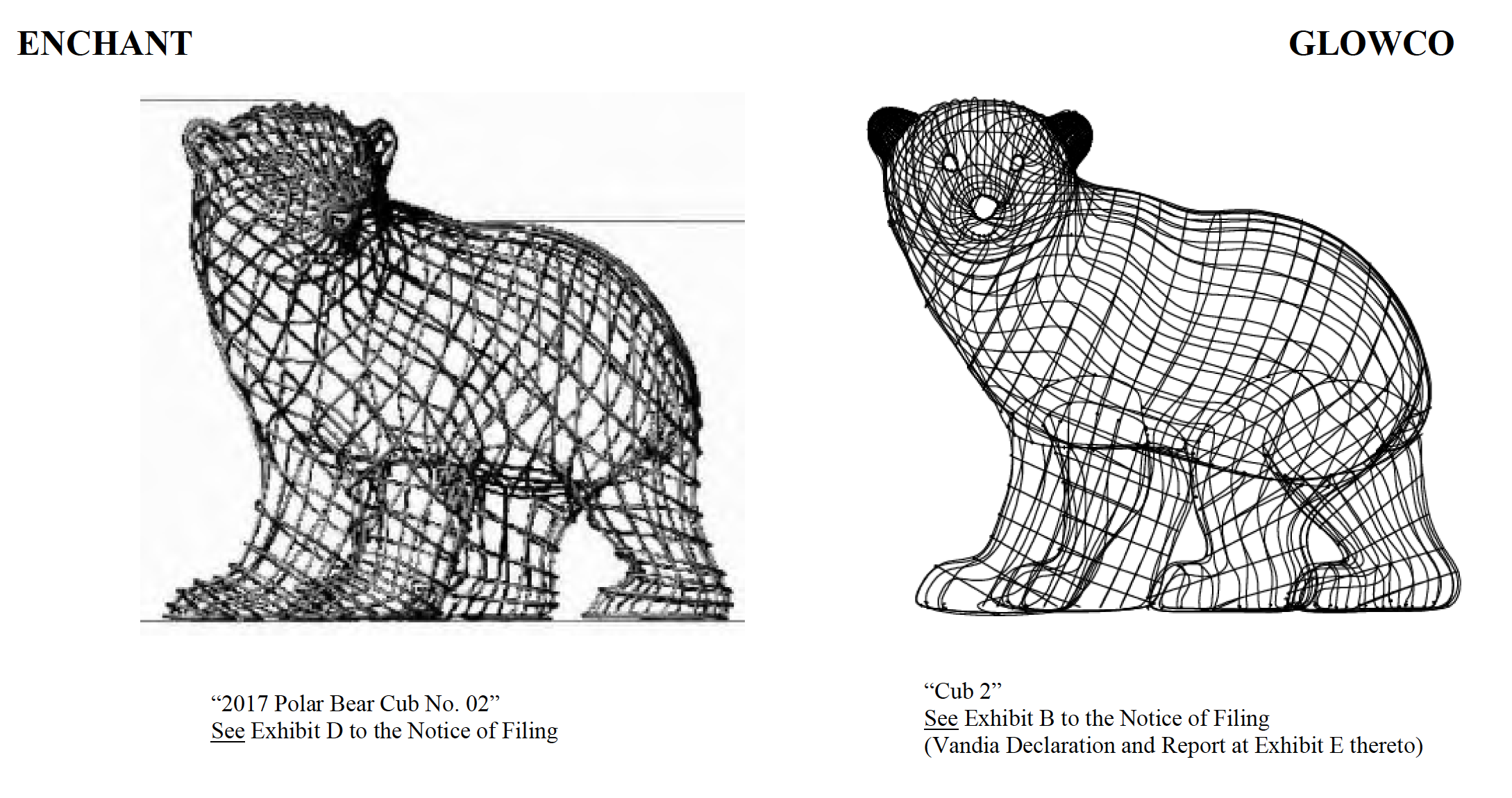 Once it learned of the defendants' plans, Enchant sued for copyright infringement. The district court refused to grant a preliminary injunction, and the Sixth Circuit affirmed.

The Sixth Circuit agreed with the district court that Enchant was not likely to succeed with proving that the defendants had copied protectable elements of its sculptures. At the outset, the court found that there was no direct evidence of copying by the defendants. While the defendants admitted that they had shared images of Enchant's designs with vendors in China as part of the bid process, they also provided testimony and documentation (which the district court found to be credible) that supported that those images were not used to build the actual sculptures. Thus, without direct evidence, the plaintiff had to prove copying indirectly by showing that (1) the defendant had access to its sculptures (which was undisputed) and (2) there were "substantial similarities" between the the defendant's and the plaintiff's sculptures.

After reviewing the record, the panel agreed with the district court that "any similarities between Glowco’s sculptures and Enchant’s were inherent in their subjects (animals and ice sculptures) and that Glowco’s designs were not substantially similar to what could be deemed Enchant’s original work." The plaintiff's sculptures depicted animals (polar bears and reindeers) in lifelike poses and natural phenomena (snowflakes and ice crystals) "the way in which [they] would be found in nature." As such, most of the executional elements in the plaintiff's sculptures were unprotectable ideas or facts - i.e., the "standard, stock, or common to a particular subject matter." The single allegedly “non-naturally occurring feature” that appeared in one of the plaintiff's and defendants' sculptures - an “anatomically incorrect neck” on a deer sculpture - was not itself a sufficient “instance of overlap” to demonstrate that the defendants had copied the plaintiff's sculptures. Finally, there were numerous, substantial differences between the designs, including different shapes and angling of the various body parts of the animals and different poses. In short, there are only so many ways to show a deer prancing, a polar bear cub walking, and an ice crystal sparkling.

In its appeal, Enchant urged the court to apply the Inverse Ratio Rule to its benefit:  since the case of access was strong (and undisputed), plaintiff argued that a lower showing of similarity would be sufficient to prove copying by the defendant. In a footnote, the court found that the plaintiff had forfeited this argument because it had not meaningfully developed it. Among other things, the plaintiff had failed to "explain[] what standard, lower than 'substantially similar,' the district court should use if it agreed that [defendant] had a high degree of access." The court acknowledged that prior cases in the circuit had "suggested" that the Rule might be applicable; however, the court concluded that those discussions were "entirely dictum," and that "it [did] not appear that this circuit has meaningfully relied on the rule, in the manner in which Enchant requests, in any binding precedent." Finally, the court noted:

In any event, the “inverse-ratio rule” appears to be on its last legs. Fearing that the rule has little use in the modern, “digitally interconnected world” in which “the concept of ‘access’ is increasingly diluted,” the Ninth Circuit recently abrogated the rule in its circuit, “join[ing] the majority of [its] sister circuits that have considered the inverse-ratio rule and have correctly chosen to excise it from copyright analysis.” Skidmore as Tr. for Randy Craig Wolfe Tr. v. Zeppelin, 952 F.3d 1051, 1068–69 (9th Cir. 2020) (en banc). The only circuit it identified as still endorsing the inverse-ratio rule is ours. Id. at 1066. So questions remain whether the inverse-ratio rule applies (or should apply) in our circuit. But we do not answer them today, given Enchant’s cursory presentation of the issue.

Smart money says that this panel is laying the groundwork for a future panel, when presented with the right opportunity, to give the Inverse Ratio Rule the heave ho (ho-ho-ho). 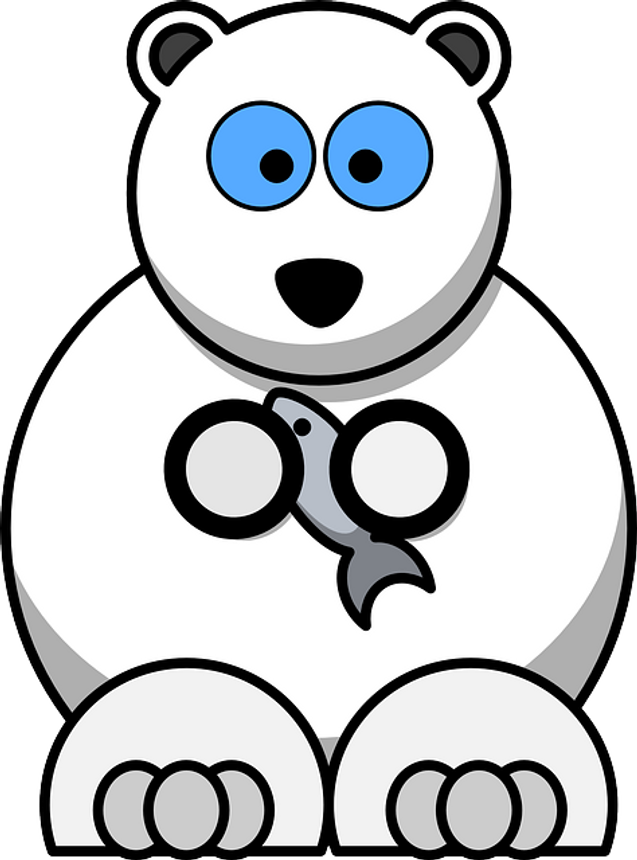