The last time I wrote about a "Honey Bunches of Oats" lawsuit, the school year was beginning and a blog post about breakfast cereal seemed like a good way to start the day.  Now, with everyone baking fresh bread and preparing elaborate breakfasts in the morning, since you're not rushing to get the kids off to school or to get to work, perhaps quick and easy-to-prepare breakfast cereal isn't as top of mind.  Well, it still is for a plaintiff in a lawsuit against Post Consumer Brands in the United States District Court for the Northern District of California.

The plaintiff sued Post Consumer Brands, alleging that the packaging and branding of "Honey Bunch of Oats" cereal are misleading because they convey to consumers that honey is the primary sweetener in the cereal, when, in fact, the cereal is primarily sweetened by refined sugar.  In arguing that he was misled about the amount of honey contained in the cereal, he pointed to the word "honey" in the name of the product, the honey dripper (with dripping honey) in the center of the package, and a bee flying along the bottom of the package.

But, before I tell you about how that case came out, I have to tell you a bit about my blog post from September.  In a nearly-identical lawsuit brought in federal court in Massachusetts, the court dismissed the case, holding that since the packaging didn't claim to be exclusively sweetened with honey, reasonable consumers would understand that the cereal includes other sweeteners as well.  The court also pointed to the fact that the product's ingredient list did properly describe what was in the product.  The court wrote, "consumers who are presented with images or information that would be recognized as ambiguous by a reasonable consumer are generally expected to resolve such an ambiguity by referring to other information on a product's packaging."

In the current California case, the court denied the motion to dismiss, holding that a reasonable consumer could, in fact, be misled by the cereal's name and packaging.  The court wrote, "Although the package does not make any objective representations about the amount of honey in the cereal, a reasonable consumer could see the prominent honey-related words and imagery and be deceived into thinking the cereal contained relatively less refined sugar and more honey."

Are consumers in the First Circuit -- toughened up after harsh Massachusetts winters -- just less "likely to be deceived"?  When consumers in the 9th Circuit see a big picture of sun on the package, are they more likely to think about the great outdoors than what may be on the ingredient list?  Well, we'll have to leave these questions for another day, because I have fresh bread to get out of the oven.

"Under the reasonable consumer test, a plaintiff must show that members of the public are likely to be deceived" 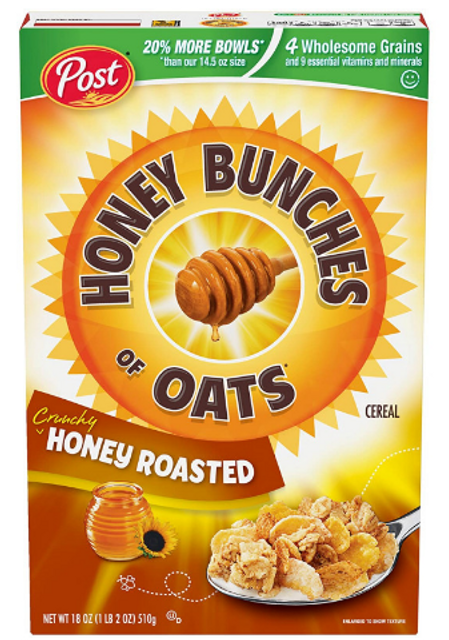