The Federal Trade Commission announced that it entered into a settlement with Renaissance Health Publishing and its owner over allegations that the company made false and unsubstantiated health claims, and used phony endorsements, in connection with promoting its Isoprex dietary supplement as a "miracle" cure for joint pain and inflammation.

The FTC alleged that, through advertising online and in direct mail, Renaissance Health falsely advertised that Isoprex relieves pain, reduces inflammation and swelling, and rebuilds joints and repairs damaged joint cartilage.  The FTC said that the company made unsubstantiated claims such as:

In a statement, Andrew Smith, the Director of the FTC's Bureau of Consumer Protection, said, "“When you target older adults with promises that your supplement will relieve pain better than FDA-approved drugs, you’d better have the scientific proof to back that up.  For help with pain or other health conditions, people should rely on their medical professional, not on an advertisement.”

For example, the FTC said that Renaissance Health printed an endorsement from "John A." that said, "THANK YOU ALL very, very much for creating such a product that would make her pain go away."  The FTC alleged, however, that the endorsement wasn't from an actual, independent consumer -- but from a relative of a company employee.

As part of the settlement, the company agreed to a $3.93 million judgment.  Due to inability to pay, however, the company is only required to pay $100,000.

What are some important take-aways from this enforcement action?

First, don't assume that the FTC is just focused on COVID-19 right now.  Although significant resources are being put into preventing coronavirus-related fraud, the FTC is continuing its regular advertising enforcement program, going after misleading health claims, "made in USA" claims, fake endorsements, and other unsubstantiated claims.

Second, fraud affecting older Americans continues to be a top priority at the FTC.  When advertising to an older audience, use extra caution to ensure that your claims are truthful and not misleading.

Third, there's no substitute for having competent and reliable scientific evidence when making claims relating to consumers' health or safety.  The order in this case defined "competent and reliable scientific evidence," in part, as "human clinical testing of the [product or an essentially equivalent product] that is sufficient in quality and quantity, based on standards generally accepted by experts in the relevant disease, condition, or function to which the representation relates, when considered in light of the entire body of relevant and reliable scientific evidence, to substantiate that the representation is true. Such testing must be: (1) randomized, double-blind, and placebo-controlled; and (2) conducted by researchers qualified by training and experience to conduct such testing."

Fourth, remember that the FTC's Guides Concerning the Use of Endorsements and Testimonials in Advertising don't just apply to the use of influencers in social media.  Any time that you use a consumer endorsement, you need to ensure that the endorsement reflects the consumer's honest opinions, findings, beliefs, and experiences, that the performance claimed by the consumer can be independently substantiated by the advertiser, and that, if there's a material connection between the consumer and the advertiser (such as a payment, receipt of a free product, or a payment or other relationship), the connection must be clearly and conspicuously disclosed.

“For help with pain or other health conditions, people should rely on their medical professional, not on an advertisement" -- Andrew Smith, Director, FTC Bureau of Consumer Protection 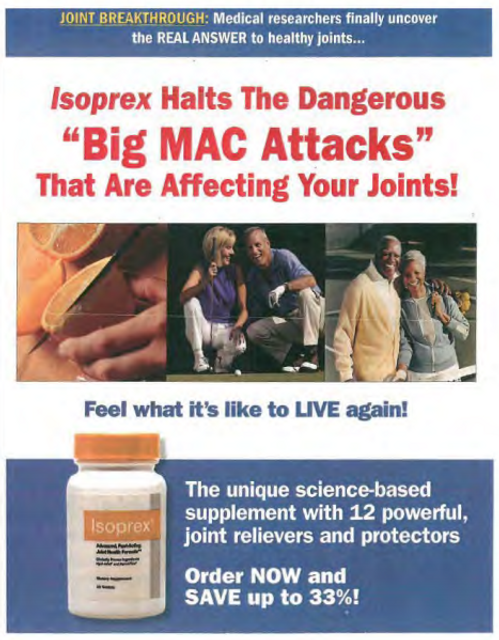