This post is about the latest skirmish in a high-profile lawsuit between the partial owners of the copyright in one of the most famous songs in R&B music history and everyone's favorite ginger pop star from Great Britain. (No, not Rick Astley. Not Geri Halliwell either.) Now that I have your attention, in the interests of full disclosure, I have to warn you that this post is actually about a discovery dispute. Srsly. Although motions to compel are typically not that compelling (sorry), the court's ruling in this case caught my eye because it raises interesting questions regarding how damages might be calculated if the plaintiff ultimately prevails on the merits. #copyrightgeek #chasingbenjamins

Marvin Gaye and producer Ed Townsend co-wrote "Let’s Get It On" ("LGO") which was released as the title track of Gaye’s 1973 eponymous album. Almost half a century later, defendant Ed Sheeran (yes, that ginger) wrote "Thinking Out Loud" ("TOL"), which earned him the Grammy for Song of the Year in 2016. In two different lawsuits, the successors to Townsend's copyright interest sued Sheeran and other defendants, alleging that TOL infringes upon LGO. To get a sense of what is at issue, check out this video which shows Sheeran seamlessly transitioning between TOL and LGO during a live performance.

Last year, in the first case (brought by the owners of 2/3 of Townsend’s copyright interest in LGO), the district court denied Sheeran’s motion for summary judgment, holding that a jury could reasonably find several similarities between the songs, including the harmonic progression, harmonic rhythm with anticipated second and fourth chords, melody, bass-line, and percussion. Griffin v. Sheeran, 351 F. Supp. 3d 492 (S.D.N.Y. 2019). The parties in that case, apparently, are soldiering on.

In the meanwhile, in the second case, the owner of the other 1/3 interest in Townsend’s copyright filed a motion to compel discovery related to Sheeran’s live concert performances of TOL. In support of the motion, the plaintiff argued that Sheeran’s repeated infringing performances of TOL had earned him big bucks - including from ticket sales, concert merchandise, and endorsements - and that it was entitled to discovery relating to the revenue earned from those sales. The defendants urged the court to deny the motion on several grounds. Defendants' main argument was that because the venues in which Sheeran performed had secured blanket public performance licenses from the applicable performing rights organizations ("PROs") authorizing performances of both LGO and TOL, Sheeran's performances were properly licensed and not infringing. Accordingly, there was no need for the discovery plaintiff sought.

To wrap our heads around the defendants’ argument, we need to back up and review how public performance rights are administered. Under the Copyright Act, the owner of the copyright in a composition enjoys (among other exclusive rights) the right to publicly perform her composition. (17 U.S.C. § 106.) A composition is performed publicly (1) when it is performed "at a place open to the public or at any place where a substantial number of persons outside of a normal circle of a family and its social acquaintances is gathered" or (2) when a performance is to transmitted to the public by means of "any device or process," such as by radio or television. (17 U.S.C. § 101.) There is no dispute that performing a composition live during a concert would constitute a public performance.

Practically speaking, it would be impossible for copyright owners of songs - typically songwriters and music publishers - to issue direct licenses to every radio station, streaming platform, tv network and concert hall that wanted to perform their songs. So instead, for convenience, they authorize PROs - such as ASCAP, BMI and SESAC - to handle this for them. Each PRO issues blanket licenses to licensees (including concert venues), granting the right to publicly perform all compositions in the the PRO’s catalog. Here, the defendants argued that because all the venues at which Sheeran performed (or, alternatively, the concert promoters) held valid blanket licenses from PROs covering both TOL and LGO, "regardless of whether [plaintiff] will ultimately be able to prove that TOL infringed LGO, ... the public performances of TOL at Sheeran’s concerts in the United States could not, as a matter of law, be infringing."

The court disagreed, holding that if plaintiff ultimately proves that TOL was an infringing work, then no PRO license would have authorized Sheeran's live performances of the resulting infringing work. First, the court noted that the author of an infringing work is not permitted to exploit the work in any manner, including by public performance. So, if the plaintiff proves that TOL infringes upon LGO, then Sheeran would not be permitted to publicly perform it himself, and he could not "assign to BMI or ASCAP the ability to include such a right in their blanket licenses."  And while it is true that the plaintiff had authorized its PRO to license to concert venues the right to publicly perform LGO, that authorization did not extend to derivative works that infringe upon LGO. In the court's words, "BMI’s and ASCAP’s blanket licenses conveyed to licensees the authors’ rights to perform their songs. They did not convey the consent of any author to play music which infringes his songs." Here's a graphic to simplify: 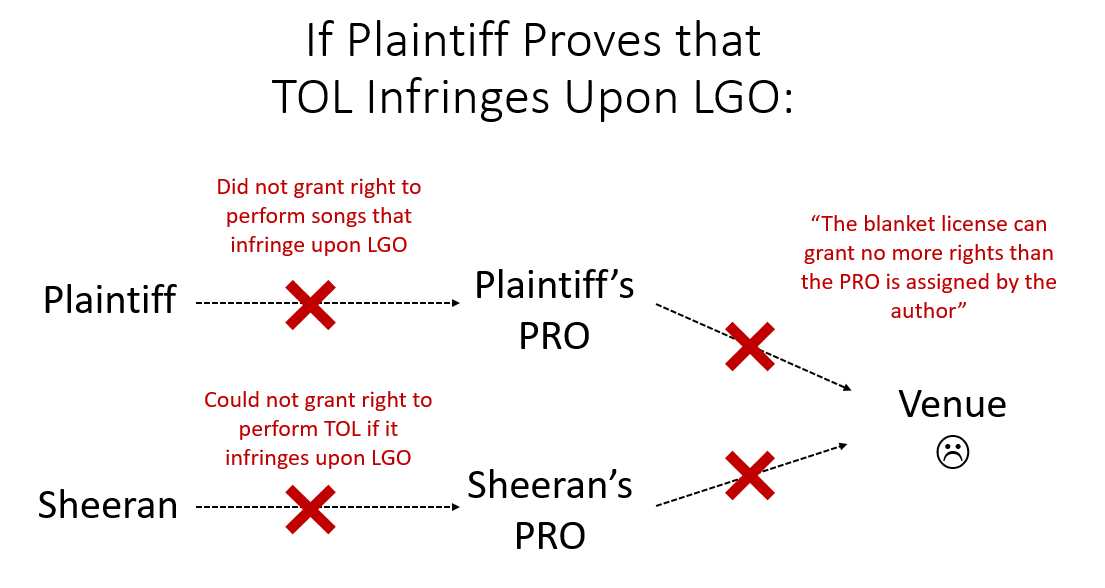 In light of this holding, the court granted the plaintiff discovery to ascertain Sheeran’s concert schedule and the revenues and expenses attributable to the concerts. "To the extent each live performance of TOL was a separate, unauthorized act infringing [plaintiff's] copyright interest in LGO, a schedule of such infringing acts, as well as the revenues and expenses attributable to each, are proportional to the needs of the case." Of course, it remains to be seen whether the plaintiff will be able to demonstrate, to the satisfaction of the jury, that a portion of these revenues are, as a factual matter, attributable to the infringement. We can anticipate that the defendants will argue that the proper measure of actual damages arising from the public performance of TOL at the concerts would be the relatively modest royalties that would have been paid directly by the PROs, and not a share of the ticket receipts or merchandise sales.

By contrast, the court refused to compel discovery pertaining to revenue earned by Sheeran that, in the court's view, was unrelated to the live performance of TOL, such as revenue from non-concert merchandise sales and Sheeran's endorsement deals. Plaintiff argued that because TOL was Sheeran’s breakout hit that made him a worldwide superstar, the revenue generated from these activities - which (at least according to the defendants) would not have been generated if TOL hadn't put Sheeran on the map - was at least indirectly linked to the allegedly infringing TOL. The court disagreed and found that the plaintiff had not "allege[d] facts adequate to state a causal relationship between the particular song TOL and those profits." Among other things, the court noted that the the plaintiff’s manager had asserted that there was no TOL-branded merchandise and that Sheeran's endorsements in the last decade did not involve TOL in any way.

"There is no right to infringe." 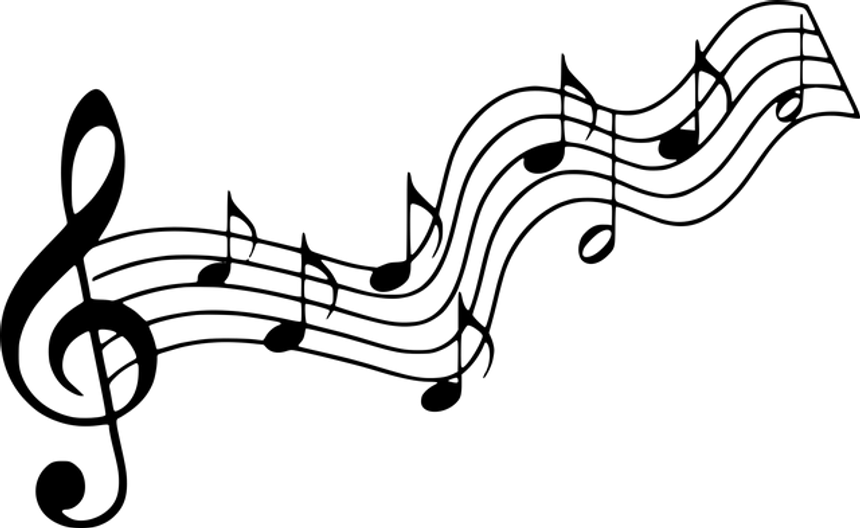