LEGO-brand building blocks are a delight for children of all ages, and when I was growing up, my household was no exception. To this day, I still marvel that I was able to snooker my brothers into recreating, LEGO brick by LEGO brick, Southfork ranch so we could reenact scenes from the TV show Dallas. We would have vicious fights over who got to use the little LEGO man with a cowboy hat (we only had one) to play J.R. Ewing. And my love for the toy persists. If anyone is feeling generous, I would still really like to own the LEGO Death Star II collector’s edition, currently available on eBay for a mere $2000.

On to the lawsuit.

LEGO owns copyright registrations covering certain 3D sculptures of figurines (the "Lego Figurines"), described by the court "as LEGO’s most iconic construction toys." These illustrations come from the registrations at issue in this case (and were helpfully included in the court's opinion): 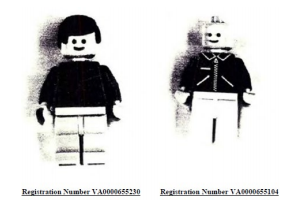 The defendant ZURU manufactures the Max Build More building bricks which includes certain LEGO-blocks compatible action figures (the "ZURO Action Figures"). These photos (also from the court’s opinion) show one of the defendant’s action figures from different perspectives (and look to me like mug shots): 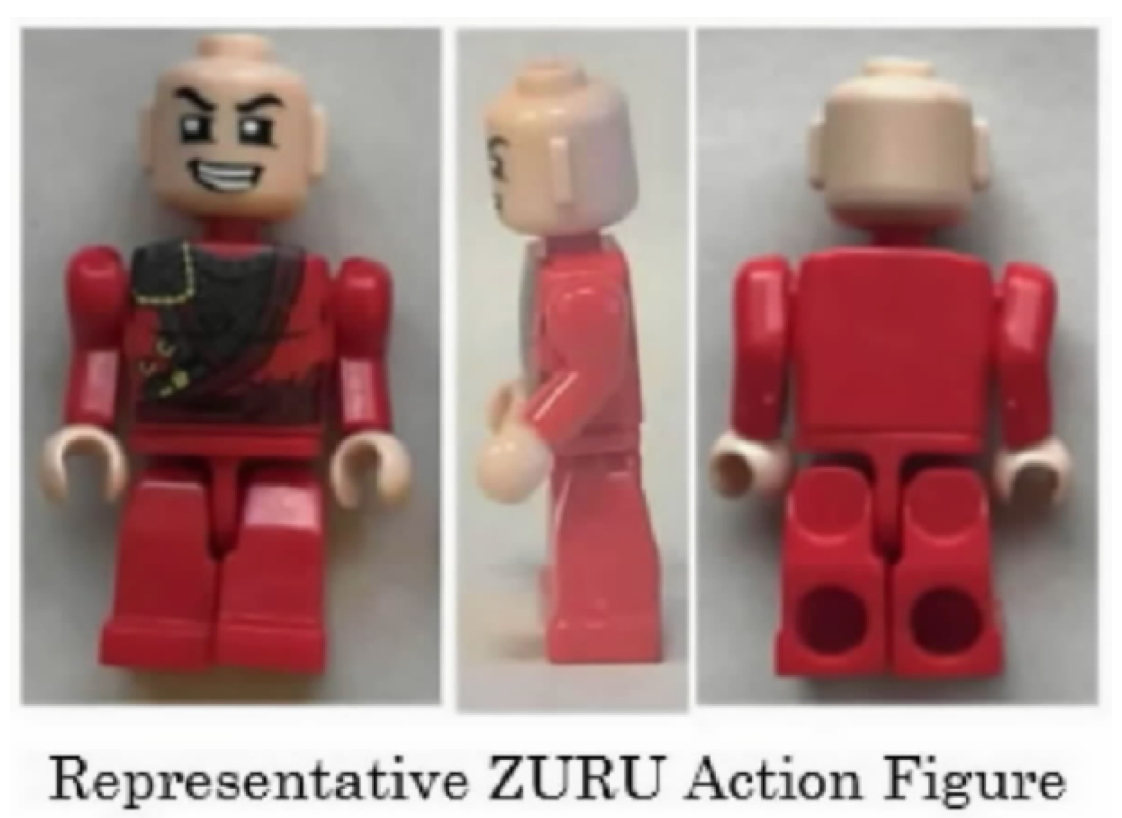 After attempts to resolve the matter amicably failed, LEGO sued ZURO, alleging that the ZURU Action Figures infringed upon the copyright in the LEGO Figurines. (LEGO also alleged that the defendant’s toys infringed its trademark and design patent rights. In this post, I address only the court’s copyright ruling relating to the figurines.) The district court sided with LEGO and issued a preliminary injunction barring the defendant from further distribution.

On appeal, the defendant argued that instead of properly comparing its ZULU Action Figures to the images included in LEGO’s registrations, the district court had made the comparison to the manufactured toys (i.e., the LEGO Figurines) which differed in material respects from the registration images and constituted unregistered derivative works. The Federal Circuit disagreed. First, as a factual matter, LEGO’s expert testified that she had compared the ZURU Action Figures to both the registration images and the actual LEGO Figurines. Second, the court found that "apart from the medium in which they are conveyed, there are no material differences between the LEGO Figurine sculptures and the corresponding copyright images." According to the court, the LEGO Figurines were the "physical embodiments of the copyrighted images" and were not derivative works since "the shift in medium from a copyright registration image to sculpture [did] not add the original copyrightable authorship necessary to constitute a derivative work." In a footnote, the court acknowledged that the LEGO Figurine sculptures and the registration images differed "in facial expression and jacket color" but found those differences to be immaterial. Cf. Skidmore v. Led Zeppelin, 905 F.3d 1116 (9th Cir. 2018) (the scope of copyright protection for an unpublished musical work under the 1909 Act is defined by the deposit copy and not any sound recording of the musical work).

Next, the court affirmed that there was a likelihood that LEGO would succeed in proving copyright infringement because the defendant’s plastic people were substantially similar to LEGO’s. The defendant argued that the district court had improperly relied on a "vague concept of a similar feel" between the parties’ toys and had ignored the many differences. Specifically, in the court below, the defendant had argued that the LEGO Figurines "utilize geometric shapes, such as the trapezoidal torso, resembling robots; whereas ZURU’s products feature cut-in waists, broad shoulders, and rounded hips resembling humanoid physiques." In addition, the defendant’s expert witness testified that the defendant’s "product looks a little bit more like an action figure" whereas "the LEGO product is really more of a construction element."  Again, the Federal Circuit agreed with LEGO, noting that "the standard for determining substantial similarity is whether an ordinary observer, unless he set out to detect the disparities, would be disposed to overlook them, and regard the aesthetical appeal the same."  While the defendant may have identified certain disparities, the defendant hadn't demonstrated that those disparities resulted in a dissimilar "total concept and feel" between the products. Stated differently, the court felt that the defendant was ignoring the forest (i.e., the substantial similarity between the "total concept and feel") for the trees (i.e. specific differences between the products).

I love it when copyright opinions include photographs of the works at issue. The most imaginative legal prose rarely captures what an image can convey. In fairly complicated cases like this one, details matter, and details are easier to see with pictures rather than words. And it gives all of us an opportunity to look at the pictures and reach our own conclusion.  #JudgesShouldCut&PasteMore 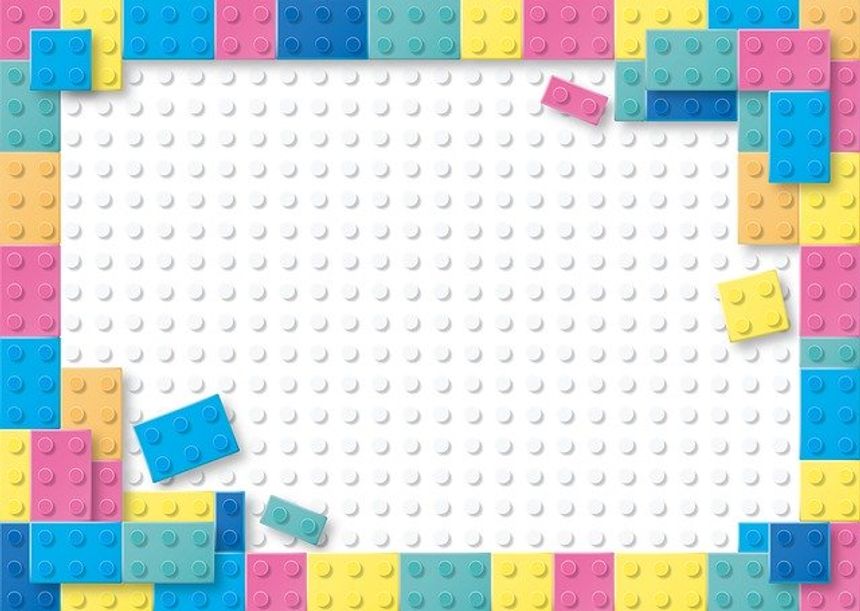