The Federal Trade Commission obtained a record $191 million settlement with the University of Phoenix and its parent company, Apollo Education Group, resolving FTC allegations that they used deceptive advertising to falsely promote their relationships and job opportunities with major companies such as AT&T, Yahoo, and Microsoft.  As part of the settlement, the University of Phoenix will pay $50 million in cash and cancel $141 million in debts owed to the school by students who the FTC says were harmed by the deceptive ads.  This is the largest settlement that the FTC has ever obtained from a for-profit school.

The FTC alleged that the University of Phoenix's advertising gave the false impression that the school worked with big companies to create job opportunities for its students and tailor its curriculum for such jobs.  The FTC charged that, in fact, these companies did not partner with the the University of Phoenix to provide special job opportunities for its students or to help develop its curriculum.

For example, in one television commercial called "Parking Lot," the company said, "Like a lot of things, trying to find a better job can be frustrating, so at University of Phoenix we’re working with a growing list of almost 2,000 corporate partners, companies like Microsoft, American Red Cross, and Adobe, to create options for you."  The company also claimed, in the commercial, that "we’re using what we learn from these partners to shape our curriculum so that when you find the job you want, you’ll be a perfect fit."

In a concurring statement, Commissioner Rebecca Kelly Slaughter said, "The deceptive claims set out in the Commission’s complaint are particularly galling to me because they sold false hope -- robbing consumers of their time and money for the prospect of a job that did not exist."

While this case may not present the most novel advertising law issues, it's a great one to have in your back pocket when someone asks you, "just how can bad can it get?"

"Students making important decisions about their education need the facts, not fantasy job opportunities that do not exist" -- Andrew Smith, Director, FTC Bureau of Consumer Protection 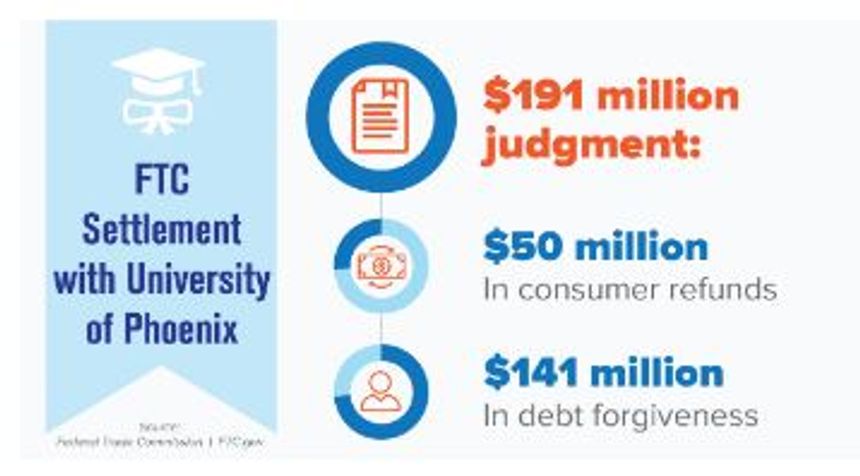