This week, pop-star Ariana Grande (known for her hit songs like Thank U, Next and 7 Rings) brought suit in the Central District of California against retailer Forever 21 (who, according to Bloomberg, is preparing for a potential bankruptcy filing) and affiliated beauty boutique Riley Rose, alleging that the companies "stole her name, likeness, and other intellectual property to promote their brands for free."

Grande, who allegedly has "the largest social media following of any female celebrity in the world" (163 million followers on Instagram as of the time of this post), claims that after she declined Forever 21's request for her endorsement, the company "publish[ed] at least 30 unauthorized images and videos misappropriating Ms. Grande’s name, image, likeness, and music in order to create the false perception of her endorsement."

Specifically, the complaint alleges that the defendants not only misappropriated images of Grande but also "falsely suggested Ms. Grande’s endorsement by hiring a look-alike model and posting photos of that model" that mimicked Grande's hairstyle, clothing, hair accessories, and poses as they were used in the singer's popular 7 Rings video, and  sometimes included unauthorized captions, lyrics, and audio from the video alongside the images.

The complaint asserts claims for misappropriation of Grande's right of publicity, both for the unauthorized use of Grande's image and likeness in photos featuring Grande herself and  for the use of a look-alike model "in clothing and accessories that resemble clothing and accessories worn in Ms. Grande’s music videos, and that the public immediately associates with Ms. Grande."

This is not the first time a well-known celebrity has tried to assert a right of publicity  violation over the use of a look-alike. In Lohan v. Take-Two Interactive Software, the New York Court of Appeals dismissed Lindsay Lohan's right of publicity suit against a video game manufacturer, finding that the look-alike was actually a "generic artistic depiction of a 'twenty something' woman without any particular identifying physical characteristics." Here, Grande's claim may be strengthened by the accompanying allegation surrounding actual images of the singer.

The complaint also asserts claims of trademark and copyright infringement for the allegedly unauthorized use of Grande's registered trademarks ARIANA GRANDE and THANK U NEXT and use of "images, lyrics, and audiovisual clips from Ms. Grande’s copyrighted songs" on defendants' social media accounts.

Grande's suit come on the heels of a similar action brought by Kim Kardashian earlier this year, alleging comparable claims against UK retailer Missguided. Kardashian was awarded $3 million in a default judgment in July.

This pattern of suits makes clear that brands should pay close attention to ensure they are not impeding on individuals’ rights when promoting their products. 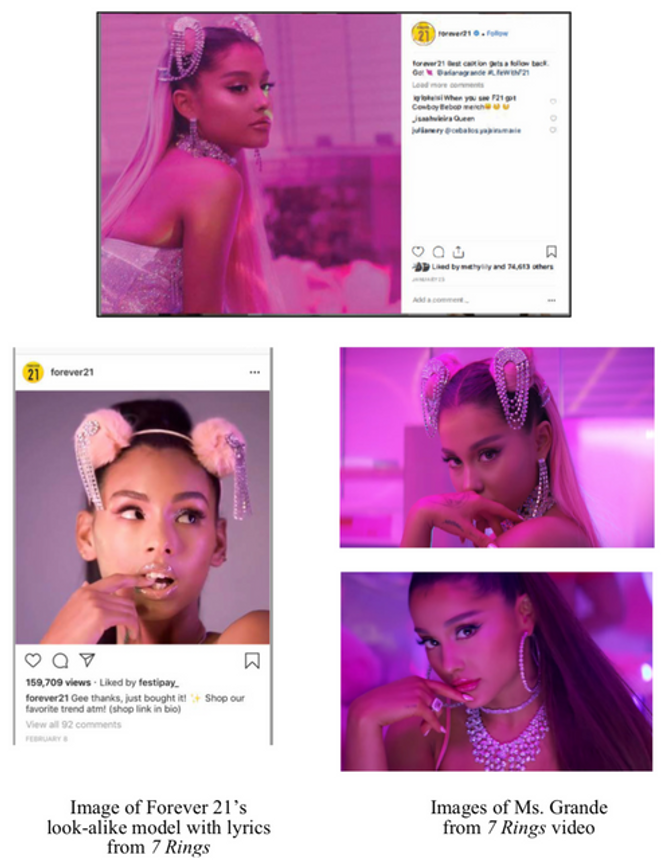