Advertising Age reported that Bofferding beer's new advertising campaign -- which features people in the "boff" -- was not accepted by Facebook and other publishers due to the nudity.  As a result, the beer brand created a censored version of the campaign.  The social media-friendly ad reads, in part, "To get it approved to run, we had to add a little something to our ad.  But, we'd never do that to our beer."

This is a great reminder that each social media platform has its own advertising policy, and that these policies can vary widely.  When planning a social media campaign, it's important to keep these policies in mind to make sure that your creative will run as planned.

As Bofferding found, the rule on Facebook is, "Ads must not contain adult content.  This includes nudity, depictions of people in explicit or suggestive positions, or activities that are overly suggestive or sexually provocative."  Facebook prohibits all nudity, even when not sexual in nature -- including "excessive visible skin or cleavage" and "images focused on individual body parts, such as abs, buttocks or chest, even if not explicitly sexual in nature."

"To get it approved to run, we had to add a little something to our ad" 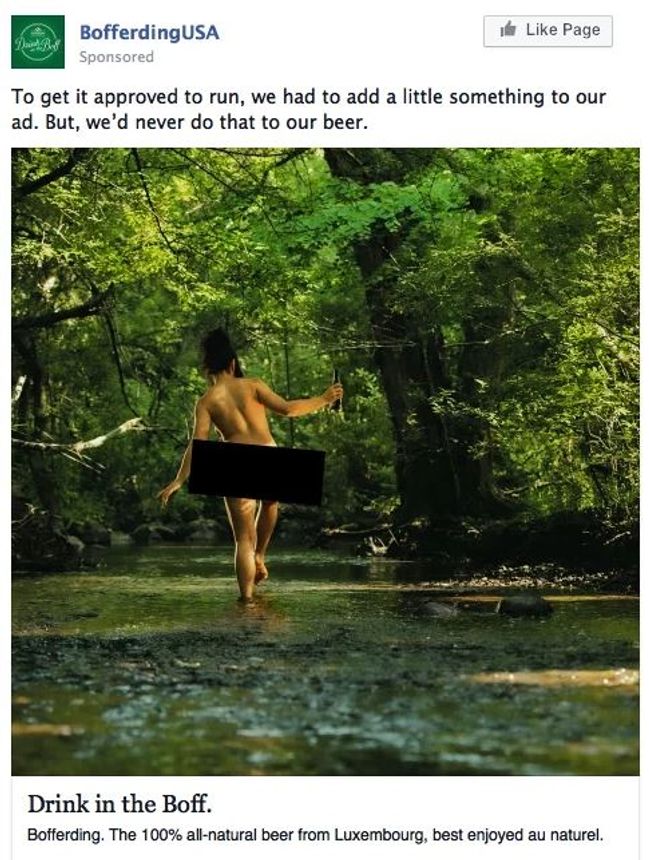