Back in the 1990s, lawsuits and regulatory actions against sweepstakes operators were legion. In the wake of these actions, and in a stunning lack of prescience, yours truly predicted the death knell for these types of consumer incentive programs. Fortunately for promotions lawyers like me, I was, of course, dead wrong: sweepstakes and contests of all kinds are still hugely popular — both on social media and in old-fashioned formats, as here.  All those regulatory and private actions didn't dampen consumer and marketer enthusiasm but they helped to establish some important ground rules for how such programs should be structured and promoted.  So is this new class action the bell weather of more promotions problems -- and more scrutiny -- to come?

This case, originally filed in 2013, alleging violations of the Illinois Consumer Fraud and Deceptive Business Practices Act, involves the following scenario, as described in plaintiffs' summary judgment motion: "When Plaintiff received the scratch card in the mail, she scratched the card, saw that she had won a prize, and called the telephone number to see what she had won. [She] was told that someone would come to her home to deliver the prize and conduct a product demonstration. She was not told what product would be demonstrated or that the demonstration would consist of multiple three-hour demonstrations."  She was then subjected to an aggressive sales promotion. "HMI’s illegal scratch card promotion was the critical link in the chain of Plaintiff’s loss. Without the illegal promotion, HMI distributors would not have been able to enter Plaintiff and Class members’ homes."

It is commonplace for marketers to use sweepstakes and contests as a way to engage with consumers. That's the point of them.  But it's critical for marketers to remember that these programs are highly regulated: they must be structured to avoid illegal lottery concerns, have a clear and complete set of Official Rules, and be promoted with the appropriate disclosures.

A class of consumers alleging a scratch-off sweepstakes card deceived them into thinking they had won a prize asked an Illinois federal judge Tuesday for a quick win against HMI Industries, arguing it proved the air filtration company is liable for shoddy business practices under state law. 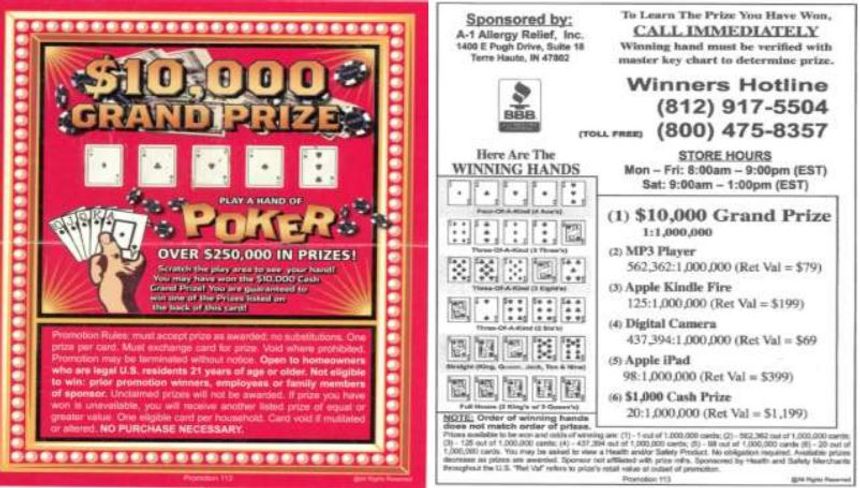