In recent years, a number of tattoo artists have filed copyright infringement lawsuits when tattoos that they have inked into their celebrity clients’ flesh have been featured prominently in blockbuster films, video games, and (yes) advertising. When giving seminars on copyright issues to brands and ad agencies, I often discuss these cases because they are beyond fun and resonate with tatted millennials. They also raise really interesting copyright issues (worthy of a law school exam question), including whether the tattoo designs have the requisite originality to qualify for copyright protection (after all, many tattoos are based on public domain imagery), and, assuming the designs are protectable, whether the tattoo artists granted their celebrity clients an express or implied license to use the designs in connection with their client's professional activities (whether it be on film, on the playing field, or on the pages of fashion magazines).

Now, out of the Central District of California, we have a case involving alleged right of publicity violations arising from the prominent use of a tattoo. Here’s the story (and here is the complaint).

Cardi B released her debut mixtape Gangsta Bitch Music, Vol. 1 on March 7, 2016. The cover art features the back of a man with an elaborate tattoo depicting a tiger battling a snake. Approximately a year after the release of the mixtape, Kevin Brophy, Jr. (described in the complaint as “a family man with minor children”) encountered the cover art for the first time and was shocked and offended to see “his unique back tattoo and likeness featured conspicuously at the center” of the artwork. The photo accompanying this post shows Cardi B’s cover art on the left, and Mr. Brophy’s back on the right.

Brophy sued Cardi B (among others), alleging violations of his right of publicity (statutory and common law) and invasion of privacy (false light). Brophy alleges that the cover art depicts him being forced into performing a sex act on Cardi B. (Cardi B fires back that this is nothing more than the “fanciful result of Plaintiff's ego and imagination running amok.”) Brophy contends that he has been “devastated as a result of the trauma to his wife and children,” is haunted by fears that “his wife believed he had betrayed her” and cringes at having to explain the image to his young son (enrolled in a Christian kindergarten). Brophy seeks actual, special, and statutory damages, profits attributable to the unauthorized use of image, and attorney’s fees and costs.

When it gets to the merits, the court will have to confront a number of important questions, including

Brands and advertising agencies that are producing ads are on notice that they need to worry not only about potential copyright claims in tattoo designs, but also potential right of publicity claims if they use a famous or unique tattoo, especially one associated with a celebrity.

As for me, I have another awesome tattoo case to add to my legal seminars. 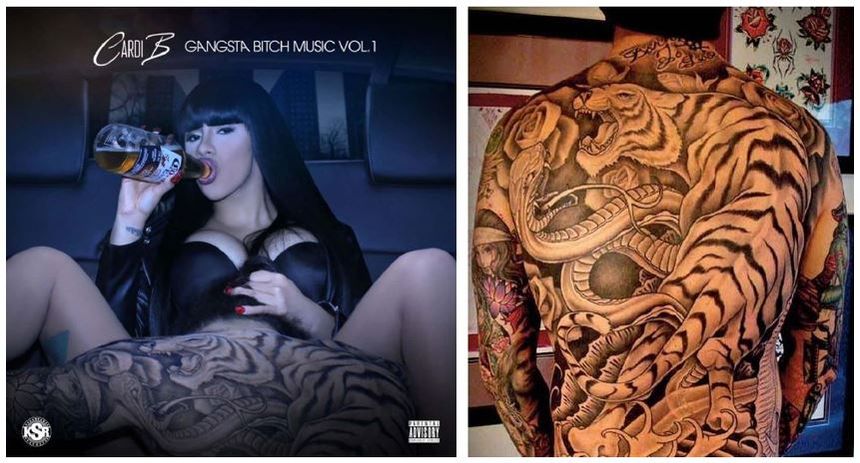