Here's a dilemma. You own valuable software, and you are convinced that your competitor has copied it. However, since your competitor (like most software owners) does not make its confidential code accessible, you can't undertake a comparison (at least not without the benefit of court-ordered discovery) to prove it. Under these circumstances, how do you make sure that your complaint provides sufficient factual allegations to support your copyright infringement cause of action?

This issue was presented in a case involving two companies that manufacture and sell interactive desktop robots. Plaintiff Digital Dream Labs (DDL) makes VECTOR, the "first home robot that will steal your heart, not your data.” Defendant Living.AI makes EMO, the "coolest AI desktop pet with personality and ideas.” DDL sued Living.AI for copyright infringement in the Western District of Pennsylvania, alleging that Living.AI unlawfully copied the source code for VECTOR's diagnostic menu screens to create the menu screens for EMO. The menu screens for each robot serve not only as the robot's face (displaying each creature's adorable mug) but also show menu options and other content when the robot is performing specific tasks.

To prove copyright infringement, a plaintiff must demonstrate (1) ownership of a valid copyright in the work and (2) unauthorized copying, by the defendant, of original elements of the plaintiff’s work. To prove unauthorized copying, the plaintiff must show both that (a) the defendant actually copied the work, and (b) the defendant’s copying constituted "material appropriation" (or, to use Nimmer’s term, "actionable copying"), meaning that the protectable elements of the two works are “substantially similar.” It is rare that a plaintiff will have direct evidence of actual copying. Instead, typically, actual copying is proven by circumstantial evidence that (i) the defendant had access to the plaintiff’s work, and (ii) the two works share similarities probative of copying rather than coincidence, independent creation, or prior common source. (Nimmer calls this "probative similarity.") 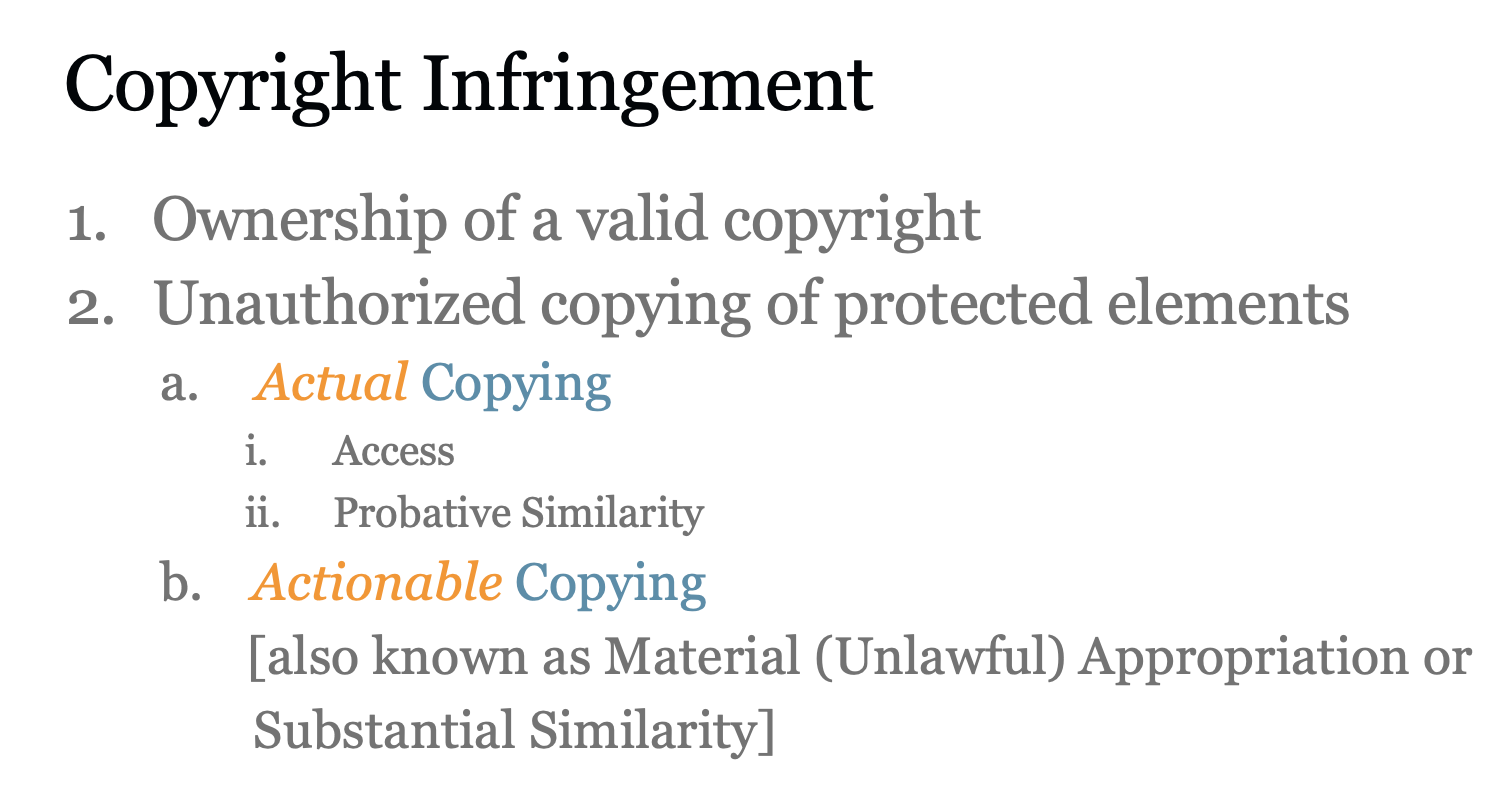 Living.AI moved to dismiss the complaint on the grounds that DDL failed to plausibly allege both access and actionable copying (substantial similarity). Earlier this month, District Judge Christy Criswell Wiegand denied the motion.

DDL’s case that Living.AI had accessed the source code for the VECTOR robot can be boiled down to this:

The court concluded that these factual allegations were sufficient to support a claim that Living.AI had access to DDL’s source code.

DDL was unable to conduct a side-by-side comparison of VECTOR’s source code and EMO’s, a fact that (as the court put it) was "unsurprising" since “the source code for consumer products like the robots at issue here is often carefully guarded." In the absence of such a comparison, DDL alleged in its complaint that there were a number of similarities in VECTOR’s and EMO’s menu screens, and that those similarities raised a plausible inference of substantial similarity in the underlying code. Specifically, DDL pointed to the following similarities between the robot's menu screens. 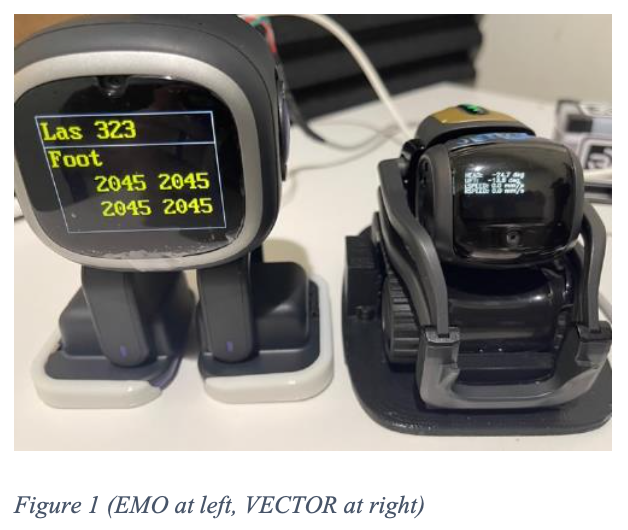 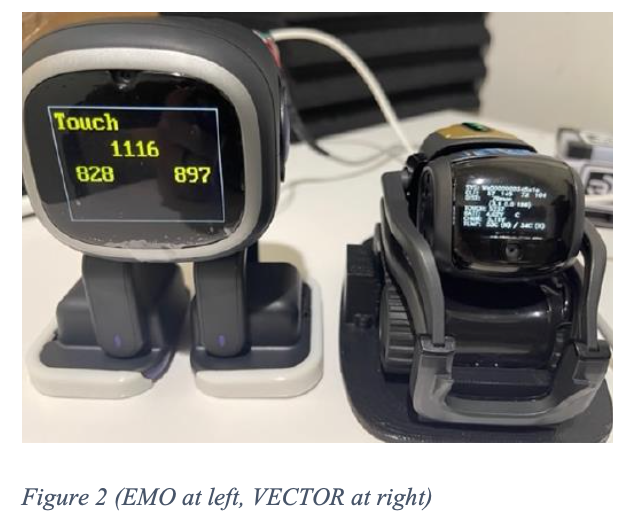 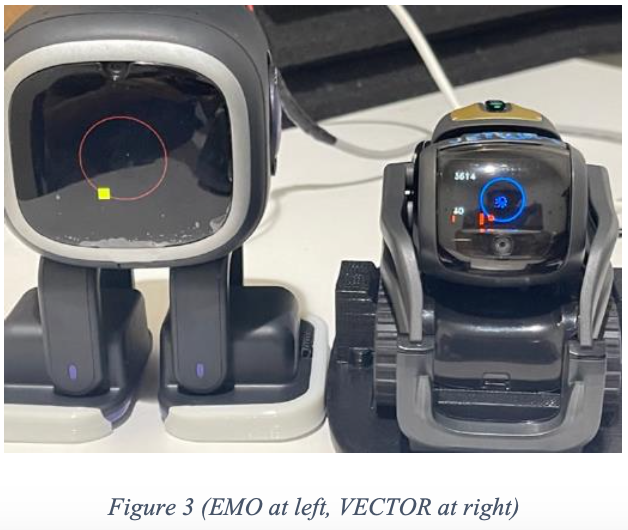 The court sided with DDL, finding that it was “appropriate for DDL to rely on similarities between the two robots’ menu screens - the visual manifestation of the source code at issue - to allege substantial similarity between the underlying source codes.” The court also agreed that the cited similarities were sufficient "to give rise to the plausible inference that the underlying source codes are substantially similar" since “insofar as everything that a computer does, including its screen outputs, is related to the program that operates it, there is necessarily a causal relationship between the program and the screen outputs.” (Citation omitted.) And while there were differences between the screens, those differences were, according to the court, "not so dramatic" to make it impossible for a rational trier of fact to find substantially similarity.

Living.AI argued that the similarities between the menu displays could not establish substantial similarity, as a matter of law, because they themselves were not protectable by copyright. After all, copyright law does not protect the idea of a screen display that shows a robot's location. That argument, the court found, was "misplaced" since the issue here was not whether there was substantial similarity between the two screen outputs (which constitute audio-visual works under the Copyright Act). The issue was whether the underlying source code for each robot (which are categorized as literary works under the Copyright Act) were substantially similar, and the similarity between the screen outputs was being offered only as indirect evidence of substantial similarity in the underlying code. So, although the similarity between the screen outputs was not necessarily dispositive of the question of whether the underlying code was substantially similar (since "different computer programs and code configurations can produce the same audiovisual depiction"), these similarities provided a sufficient factual basis, at the pleading stage, to support DDL's allegation that the underlying source code for the two robots was substantially similar.

"Accordingly, this Court concludes that the similarities between VECTOR’s and EMO’s menu screens make it plausible that the underlying source code is substantially similar and will deny Living.AI’s motion to dismiss. That conclusion does not, as Living.AI suggests, allow DDL to claim exclusive rights to the idea or concept of a menu screen that happens to have elements that are expected of a menu screen for such a robot figure. DDL, recognizing that copyright does not protect ideas, but only expressions of ideas, does not seek exclusive rights to the idea of a menu screen for desktop robots. Instead, it seeks protection only for its allegedly original expression of that idea in VECTOR’s source code." (Citations omitted and cleaned up.) 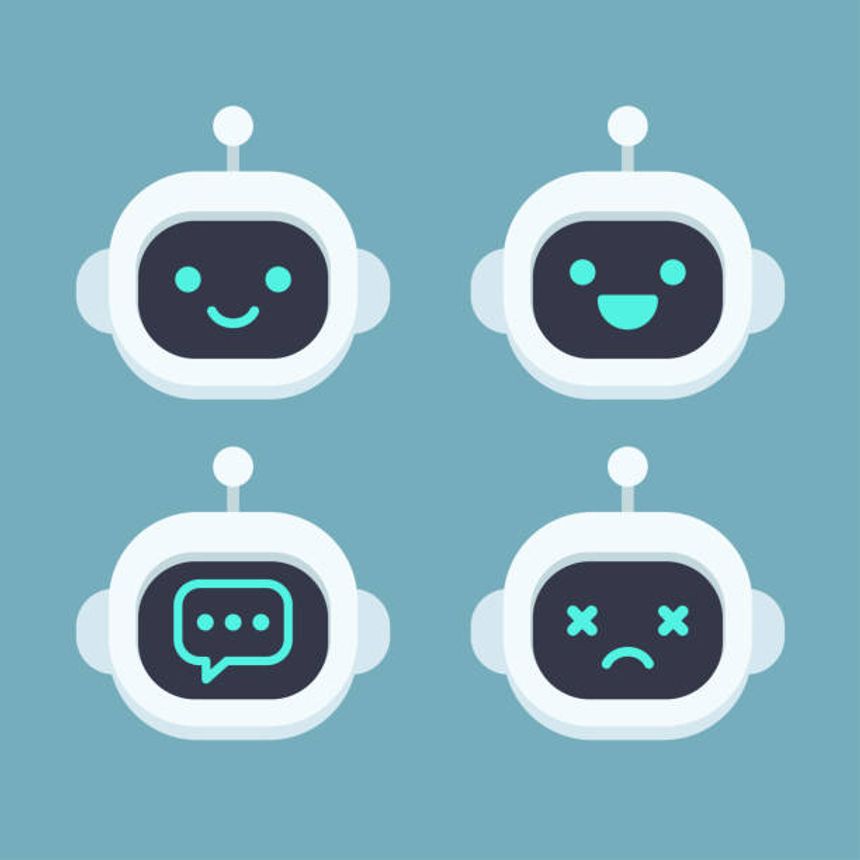 Works Published in 1927 Enter the Public Domain in the U.S.
Brian Murphy