The Federal Trade Commission announced that it reached a settlement with Axis LED Group and ALG-Health, as well as their owner, resolving allegations that the companies made false U.S.-origin claims in connection with their marketing of personal protective equipment and other products.  As part of the settlement, the defendants agreed to pay more than $157,000 in civil penalties, as well as $2.8 million in consumer redress (which was suspended due to their inability to pay).

In announcing the settlement, Sam Levine, the Director of the FTC's Bureau of Consumer Protection, said, "ALG and its CEO slapped the Made in USA label on masks that were made overseas, and now they’re paying the price.  As Americans struggle to obtain safe, authentic personal protective equipment, the Commission will use every tool we have to root out false claims and phony labels."

In the complaint, the FTC charged the defendants with falsely marketing lighting products as "made" in the United States, even though they included significant Chinese components.  In addition, the FTC  alleged that the defendants also falsely marketed these products as "assembled" in the United States, even when the products were wholly imported from China.

The FTC also charged the defendants will falsely marketing masks, gloves, and other products as being made in the United States, even though they were often wholly imported from China.  And, the FTC alleged that "Defendants have represented, expressly or by implication, that because they are all or virtually all made in the United States, Defendants’ products are safer or provide superior protection from COVID-19."

In order to make an unqualified "made in USA" claim about a product, according to the FTC's Enforcement Policy Statement on U.S. Origin Claims, the advertiser must be able to substantiate the the product was "all or virtually all" made in the United States.

The FTC charged the defendants with violating the FTC Act as well as the COVID-19 Consumer Protection Act and the FTC's Made in USA Labeling Rule.  On its face, this is a pretty straightforward enforcement action; the FTC is basically just saying that the defendants deceived consumers about whether their products were made here.  There are two particularly interesting things worth noting about the action, however.

First, the FTC alleged that -- by promoting their PPE as having been made in the United States -- the defendants' actions violated the COVID-19 Consumer Protection Act, which prohibits deceptive acts or practices, during the COVID-19 public health crisis, that are associated with the "treatment, cure, prevention, mitigation, or diagnosis of COVID-19" or a "government benefit related to COVID-19."  Apparently, the FTC's argument here is that, by promoting the products as being made here, it communicated to consumers that the products were safer or more effective.  The significance of bringing a case under the COVID-19 Consumer Protection Act is that is allows the FTC to obtain civil penalties.

Second, the FTC alleged that the defendants violated the Made in USA Labeling Rule by making false U.S.-origin claims on their product labels as well as on their website and in their social media posts.  The Rule, which also allows the FTC to obtain civil penalties, prohibits false U.S-origin claims in product labeling and in "mail order promotional material."  What's interesting here is that the FTC is apparently broadly interpreting "mail order promotional material" to include advertising materials, such as social media posts, even when consumers can't actually order the products from the posts themselves.  (In a separate statement, Commissioners Noah Joshua Phillips and Christine S. Wilson said that they believed that the FTC exceeded its authority issuing a rule that goes beyond regulating product labeling.)

What's the take-away here?  Whether you're advertising PPE, or any other products for that matter, you'd better make sure you comply with the FTC's standards on making U.S.-origin claims.

"ALG and its CEO slapped the Made in USA label on masks that were made overseas, and now they’re paying the price" -- Sam Levine, Director, FTC Bureau of Consumer Protection 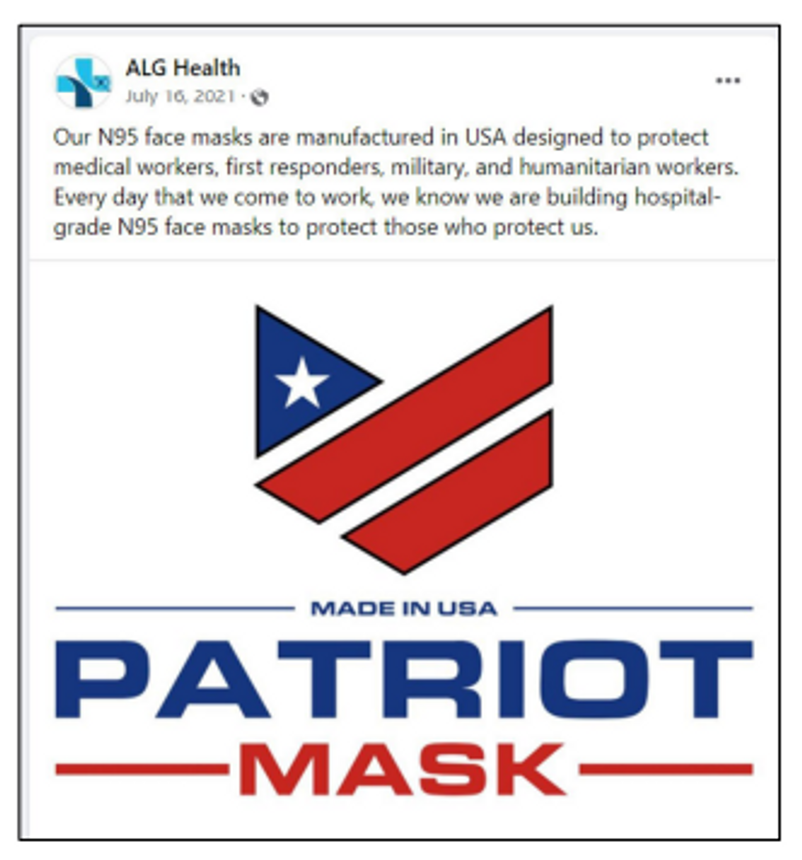